Most were enjoying the sun and the water, me, I was playing radio
Category
Serendipitous Discoveries
Parks on the Air
2022 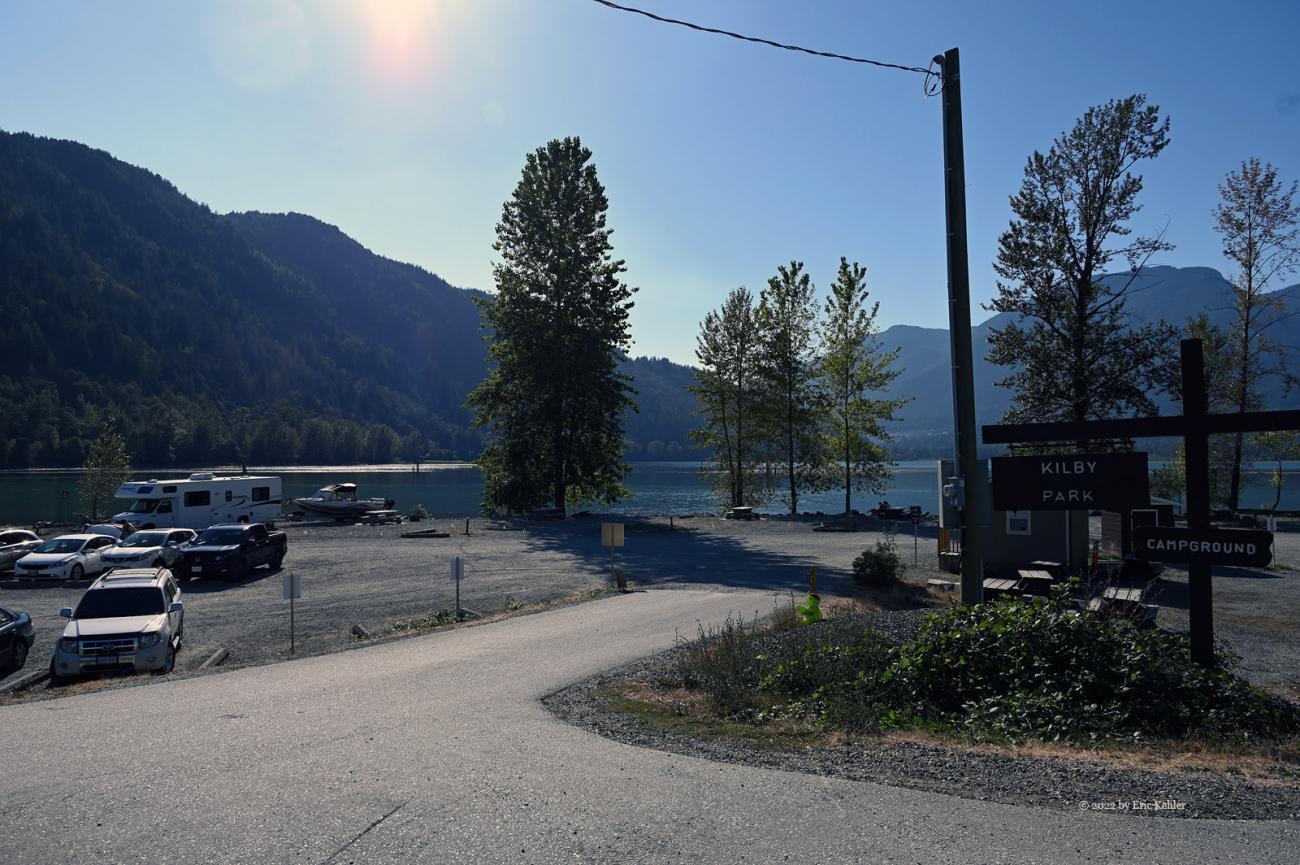 For today’s adventure I wanted to drive a bit further out. This way I could enjoy a pleasant drive through the country and visit some areas I haven’t seen in a while. As I am limited to pavement and to parks on the POTA list. I reviewed the map and saw that Kilby Park on the Harrison River was available. It is a small park nestled against the Harrison River just up from its confluence with the Fraser. The last time I was here it was January and the sand was covered in snow. The one time prior to that it was flooded and covered in several feet of water. So, I figured it may be a good day to visit, under ideal conditions.

I was joined by my son Nick again for this trip. We set out for the park at noon after an early lunch and looked to see the route picked by the navcom. It sent us the way I would likely have chosen. So off we went, it was estimating an hour 27 for the trip. We made good time on the roads but when we came to Hatzic we pulled off to pick up a few items at a convenience store. Then it was back on the road through Deroche and to the park.

The Kilby area is what remains of the older community of Harrison Mills and today offers a museum of Rural Life. It offers a historic General store and café but it is only open Fridays and week-ends this time of year. So, no historic visits today. We made for the park entrance and saw that the day-use area was almost full. I did find a spot that proved to be quite convenient. We then got out and scouted the area. There were a number of open campsites but they might fill up so we continued looking. The day-use area had a number of picnic tables that were gathered in a tidy area. A couple were in use but a nice shaded one was open and so we claimed it for our adventure.

Once the table was selected, I reviewed the nearby beach area to determine the best location for the antenna. That wasn’t overly difficult I just had to ensure I wasn’t too far from the mast lest I run out of coax. I set up the antenna while a few groups of sunbathers watched and then finished the radio hook-up. I started on 20m scanning the band for activity. There were a lot of stations I could hear, so it was a good sign that the band was open. I heard a station from Spain calling DX but the pile-up was deep and I passed. I soon heard a Slovenia station and was able to contact them. There was a very loud park activator but I kept being stepped on when I tried calling him so I moved on. I tried a few more parks but nothing was acknowledged so I decided to call myself. As the band was busy, I decided to move to 15m again this trip.

On 15m I soon had a response from a station in Ontario, then Wisconsin and two in Indiana, with a 5th one in New Mexico. Then things quieted down and I decided to move to 20m. Having found a frequency I soon was having responses to my calls ranging from New York to California. In a quarter hour I added eight more contacts. I had enough in the log to complete the park but that station I first heard was annoying me that I couldn’t work him. So I dialed up his frequency and determined I would get him in the log. I heard him talking and his signal remained strong. I let him finish with his current contact and responded to his call, a second station beat me again. Once they were done I tried again and this time he picked me up. So, I managed to complete a single park-to-park contact.

It was getting on in the afternoon and the day was getting quite hot sitting out on the sandy beach. Nick had been resting but felt it was time to head home. So, we packed up the gear and then I did a final walk to look for a few more photos before driving off. The route home mirrored the one we came on and so we set off expecting to be home in an hour and a half. Except this time, we were delayed in Deroche for a freight train that was crossing the highway. A few minutes delay and we continued along.

It was a pleasant trip and it was nice seeing Kilby Park under good conditions. It was actually quite busy for a mid-week visit and the campsites were mostly filled with various types of RVs. An easy place to get to and the beach and scenery make for a lovely spot.