Lighthouse Park in the Smoke 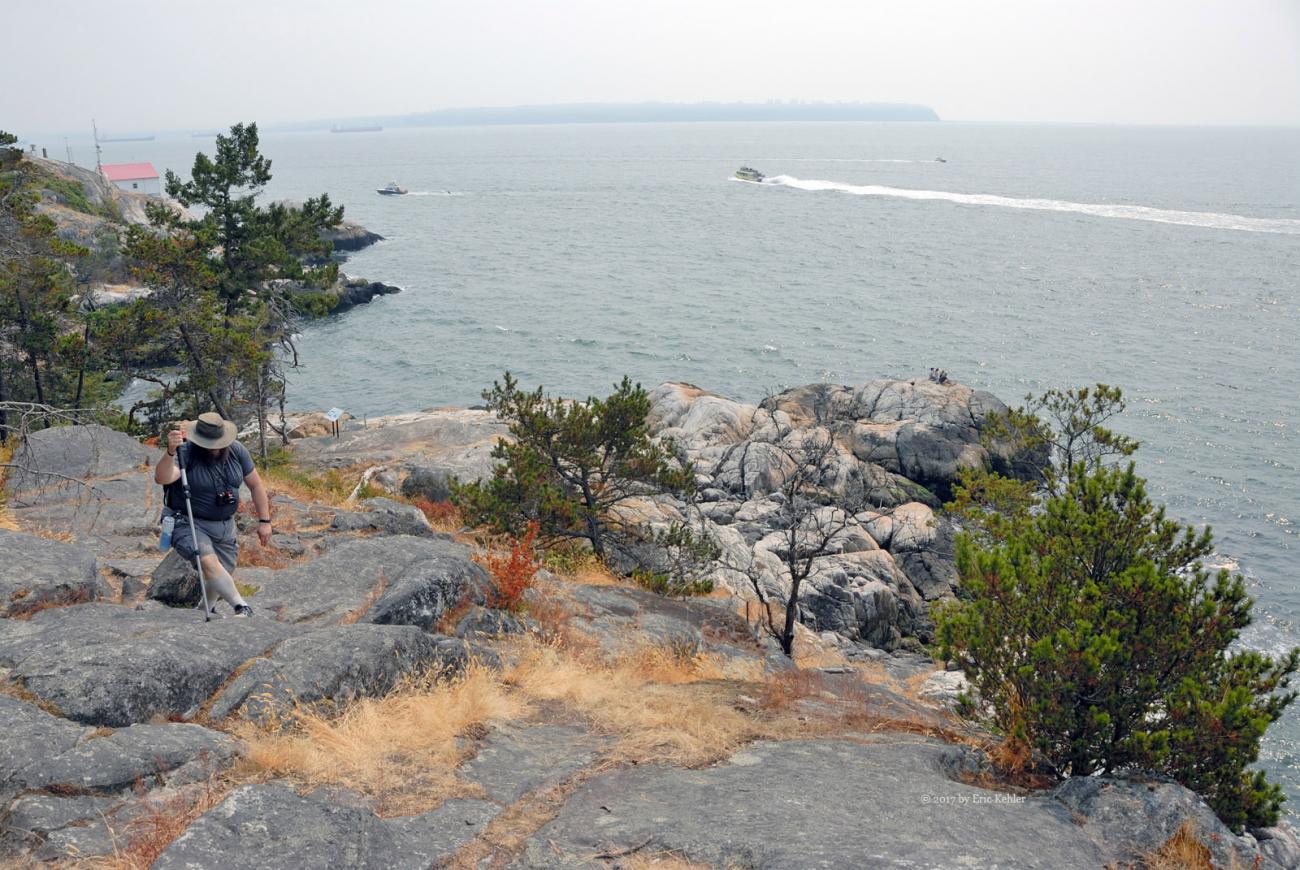 My son Nick and I make an annual visit to the park every summer. We always find the sights along the coast and trails a fun adventure offering us something new each visit. Today was no different. Our journey began with taking my wife’s new Chevy Bolt – an electric car – It hadn’t gone on this long a trip yet so we were interested in seeing how it performed.

Our first stop on leaving was to the first Starbucks along the route and then much later in West Vancouver we stopped in at the Safeway for lunch supplies. The car was performing perfectly so far and the Apple Maps navigation suggested the exact route I was planning on taking. We were soon descending through the cliff side homes and making our way in along the park driveway. The parking lot was already full and we had to carve out a spot between a jeep and a fence. But the car is small enough to fit so we were parked and ready to set off.

We planned to hike the eastern trails first and eat lunch at Eagle Point. So we started out on our adventure, just past the parking lot we veered off the main route and started for the summit trail where we made our way to the rocky outcrop that forms the spine of the park. We were the only ones on the summit so we were able to enjoy the peaceful seclusion. However, we had no views of anything! The smoke that was filling the whole Fraser Valley was thick enough here that even the trees of the park were muted not all that far from us. The water was barely visible. After gathering a few photos we started down and followed the trail to the point. Along the way we stopped to learn about two types of berries that were plentiful along the trail. One, the Oregon Grape, we sampled and it was quite bitter, the second was a black Huckleberry and it was very sweet. So for today’s adventure we learned about a few plants as we continued to the point.

Once on the point we quickly picked a rock to settle down on for lunch. When we arrived we were the only ones there. I quite like the eastern trails as they are much less travelled than the western ones. As we ate a few groups came along to enjoy the area. It was actually quite pleasant as there was a slight cooling breeze and though the sun was out, the smoke absorbed all its heat so we weren’t getting heated by the sun as we rested. Now the bad thing was that the view across the water were quite curtailed and I could barely make out outlines of the tall buildings in Vancouver!

Well, done with lunch we continued along to the West Beach passing through the crowds at the southern end of the park. The West Beach had only one group spread-out on the rocks when we arrived so this site also was barely used. After a nice rest and a few snacks we trekked across the rocky shore to the lookout above us rather than follow the trail back out that we used coming down. It actually is much shorter that way. We continued along to Shore Pine Point formally called Jack Pine Point (which I prefer). We stopped for only a brief moment before continuing on. By now the heat of the day was starting to build so we just continued on to the parking lot. Well if it was busy when we arrived, now it was downright insane. Cars were parked in the way where they shouldn’t be and there was a long line of cars coming in looking for a spot! It took a bit to get out! But we were soon making our way along the roads for home. The car did very well on the return leg and in the end 138Kms used about a third of the charge – right on the projected rate. So we consumed about 20Kwh for the drive or around $2.50 in cost And a fun drive to boot.