A great day to drive the back-roads with the family.
Category
Serendipitous Discoveries
2018 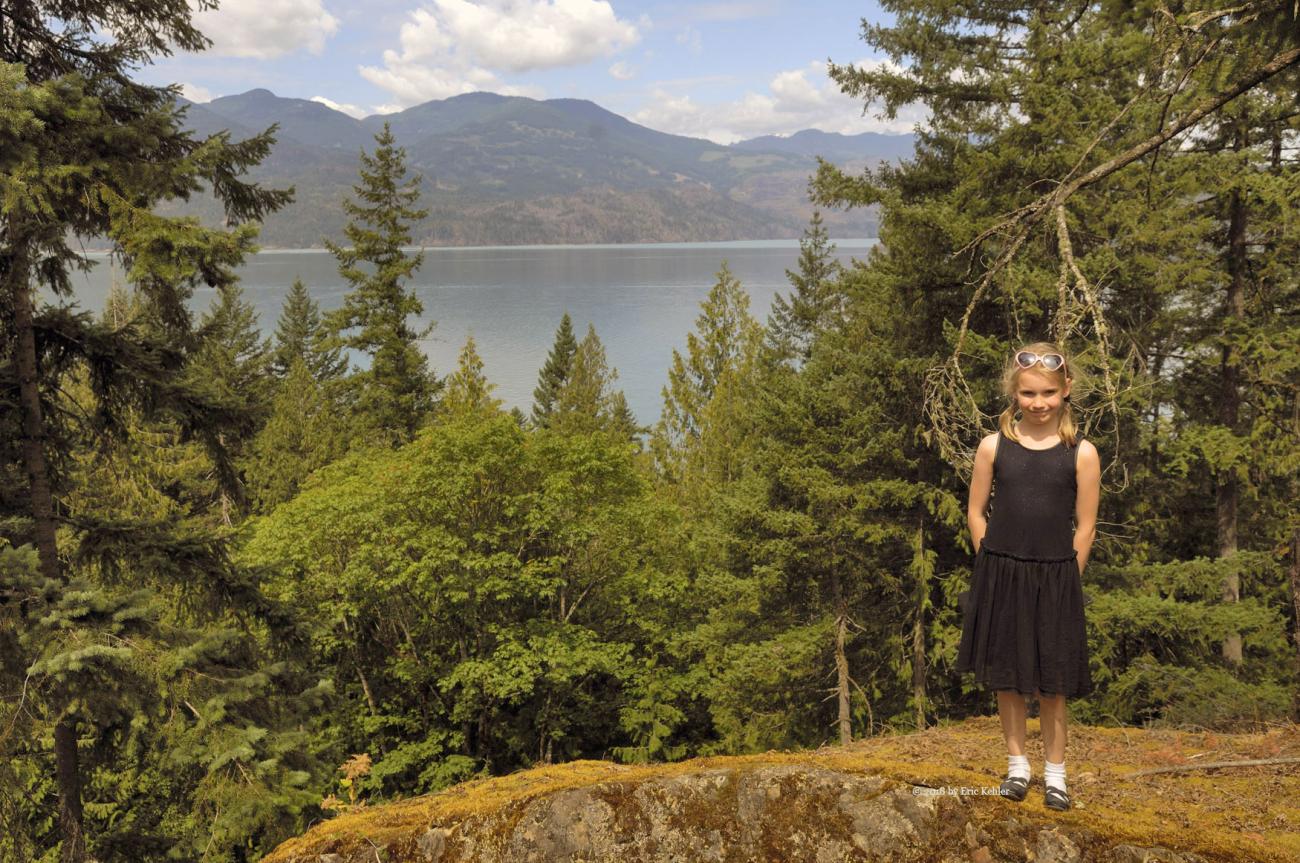 Today was Elizabeth’s second adventure into the hills with her grandfather and dad. Ethan thought a gentler road with a lake would be a good second trip and so I suggested the east Harrison and to there we went. Our morning began a bit after 8am with the loading of the truck and the essential first stops. The one key stop Ethan required was to Davis Meats to pick up some real beef jerky. Once the beef was in hand we made quick time to the start of the forestry road.

Elizabeth is still learning on how to deal with bio breaks as an 8 year old girl in the bush. Today she thought a dress might work better. So she arrived in a black one that looked cute but the black leather shoes were perhaps not really the best fit for the day. So we set off and did our best to help her along. Once we reached the logging road we switched over to 4x4 mode and continued in to the Slollicum falls. Here we stopped so Elizabeth could see the waterfall and for me to capture a few more photos of the waterfall I have probably shot more than any other. It is always an amazing sight.

After the waterfall we decided to head down to the cascade peninsula area and visit the small rock cliffs that impressed Liam earlier this year. The rocks blocking the road were still out of the way but the trees were now in full leaf so the road was much tighter to pass through. We inched along pulling in the mirrors to keep them from getting wrecked. Driving through the tight space was quite interesting to Elizabeth. Once we got to the end of the spur and the wide turn-a-round we parked and set off through the side-growth for the rocks. This trip the Thimbleberries were tall along the trail, I walked easily through them in the early spring, and today they were taller than Elizabeth. Ethan and I made a path for her and she slowly made her way through them and up to the rocky ledge at the base of the rocks. From there the way was much easier and we were soon on the top of the first one. She seemed to enjoy the adventure so far. Once down again we decided to hike up a second rock. Soon we were heading back to the truck. When I was almost back I heard an ATV on the road checking out the route and they were just leaving as I emerged from the Thimbleberries.

Well it was around 11:30 so we decided to head somewhere for lunch. The main camping beach up at 21km was my suggestion so off we went to the beach area. I was hoping it wouldn’t be overly crowded as it is so popular. When we arrived at the start of the hosted area we stopped to chat with the guy who is this year’s host. He said he arrived in mid-April and has been here since. Previously he was hosting a spot near Lund. He said that the area hasn’t had too many issues.

We drove along to the northern end and found a spot to park, there were a good number of cars but the place was not nearly full like it can get on a long week-end. Once parked we walked to the beach and picked a spot between some logs to cook some wieners for hot dogs. They did taste good up here. While we were enjoying the beauty one of the campers started up their loud rap music. Not really my style but I was thinking why do they need to bring the city up here where they come to get away from it? Well we were almost done eating so we were soon packed up and back on the road.

I wanted to return to the bear creek fsr and see if the locked gate was still ‘unlocked’. Alas when we got to the gate the chunk if link that had been cut out was welded back in place and so the gate was once again locked. We did park at the gate and walk the 150m up the road to the viewpoint which is really quite lovely. After capturing a few photos and walking around the spot we returned to the truck and continued back towards home. I suggested we take Elizabeth to a cliff face with an amazing view. So we turned up the required road and soon were gaining elevation on the side of Lookout Peak. It really isn’t far in to the spot I wanted to show her. Once we arrived and parked we made our way through the stubby pines to the top of the cliff face. It is a great view of a small lake and the big Harrison behind. Elizabeth seemed to like the view and Ethan was able to give her some good teaching on heights and cliff faces. Done with the cliff we returned to the truck and started for home in earnest this time. Ethan needed to be back early for a gathering at his place this evening, so it was time to start back. Though a shorter trip it seemed to fit well for Elizabeth and I know I enjoyed the few hours in nature.