Morris Valley and the Sts'ailes 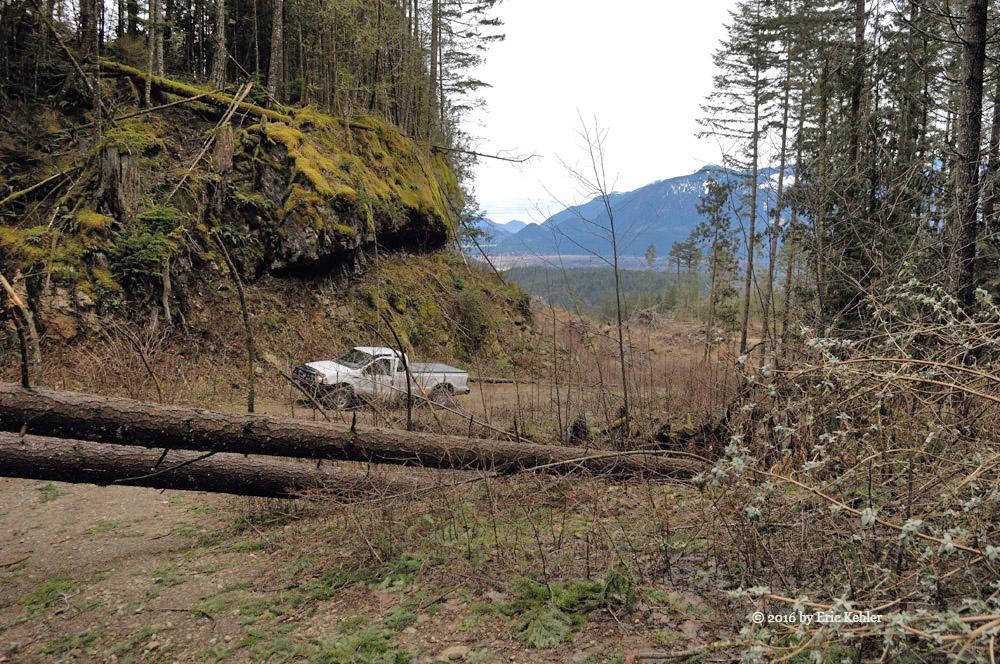 At Last! I finally got out in the hills, almost missed the first month of the year. It seems that the weather is better during the week than on the week-end, and exploring the hills in the rain is not my preferred time to go out. I did miss one good week-end as my son had a chance to take his wife and two boys up to the local ski-hills for a family day. I guess grandpa comes in last place but so it should be, it gave me the opportunity to do yard work; such fun. But here we are on another Saturday and starting out for the West Harrison area.

Today’s objective was to do a look-over of the road leading to Chehalis Peak. This road is on the west side of the summit and it looked like it would get quite close to the top making hiking it for a SOTA activation fairly easy compared to the eastern approach. So we set off for the Weaver Creek fish hatchery which is on the corner of the road we were turning onto. We arrived in good time after our stops for coffee, fuel and fresh beef-jerky the order of importance is open for debate. We arrived at the hatchery and the fork where we would normally continue on past and up the start of the logging road, today we turned right and continued south along the east side of the hatchery.

The road is well maintained as there are a number of homes built along it and at the far end along the Harrison River. Unfortunately as we drove south we encountered a gate with lots of warnings to get lost as it was private property. I think it was a bit over-stated as it is a public road. But we didn’t check the gate as we had passed the entrance to the logging road we needed to take to the summit. We turned on to it and started up the slope. The road was in reasonable shape and was cleared of some recent trees that had fallen across it. There were a couple of side spurs that led to the base of transmission towers but we ignored them and continued on the main line until we encountered a wide fresh washout. It was too deep for our truck to cross and just beyond it were two large trees laying across the road that we would need to clear. So we decided to call this road and start back down. Looking at the map later I could see that we were 2km from the spot we would have parked at for the hike so although not at the end, it would not be too bad a start for the hike.

On the downward drive we stopped at a spur overlooking the Harrison River where I gathered a few photos. Here I noticed the smell of stale oil and decided to move on fairly quickly. On our way down we came by another truck coming up, inside was a family of three out exploring the area. Back on the lower public road we stopped where we had a nice view of Morris Lake and the valley beyond. Here we again noticed the smell of old oil but now we were a bit concerned. So we checked out the truck and discovered that the rear right brake was leaking fluid. It was a slow leak so we decided to continue on but with a careful eye on it.

We returned to the hatchery and continued our drive up our regular road to the start of the FSR proper and then on to our first view of Harrison Lake. Here we took the first side road which heads south along the lake to an overlook above the Harrison River and on the east side of Chehalis peak which we had just been exploring. The drive along the transmission line service road went very smoothly until the last 250 feet. Here we encountered a large rock we had to drive up on but with it being wet it was too slippery for us and we were spinning out digging a hole. So we decided to not push it and started to back down but we had slid enough that the back end was now blocked by the slope - going forward was not happening but neither was reverse. It was time for the winch and a bit of help moving forward enough to get our rear freed. Now the trouble was that there were no large trees in front of us for quite some distance. I was able to find some old stumps but the first proved too rotten. The second held long enough for us to get ourselves repositioned and then we backed down to a place where we could park. We wanted to walk to the end of the road and gather some photos from the lookout.

The short walk along the last part of the road went easily enough until we reached the clearing around the last tower. Here I was walking ahead of Geoff and looking for an easy way down to the lookout when I heard a cry and turned to find Geoff laying on a large rock he had slipped on. He had his coffee cup in one hand and his shotgun in the other and so had little with which to break the fall. So he hit hard and I saw before a whimpering father of two sprawled across the rock with his gun and coffee safe but his knee and thigh in rough shape. In a couple minutes he was already sporting a huge deep bruise. But of course it was not a time to offer much sympathy just friendly teasing as to ones increasing age and diminishing agility. After a few minutes of recovery we continued to the lookout for our photos.

Done with the area, we returned to the truck and backed it down until we could turn around. Then we found a flat area with a view to the north along the lake where we stopped for lunch. We checked the brake fluid again and found it to be fine so after lunch we continued north along the mainline and explored a few more spots as we made our way to the area around Wood Lake which was burned last summer. The area actually looks starker than it did on our last trip as all the green ferns were brown in the winter season. It should start looking better soon. We continued on to the spot where the Lookout Peak trail starts so I could gather a few photos for my friends in the radio club who hiked the summit last year. It was a bleak sight with all the black and lack of green life.

By now the day was getting on and it was getting quite dull so we started back up the road having enjoyed a lovely day in the hills. When we reached the Weaver Lake side road we decided to head up to it to see the area as it had been years since we were last there, but as we got near the lake the road was gated stating that the campsite was closed. So we never did see the lake. We’ll just need to try again later in the year. Turning back, we were soon back to the mainline and out by the hatchery where we reset the truck for highway driving and then made for home. It was a good day and adventure and we both had a decent time for the most part and now I know how to prepare for the hike to Chehalis Peak.