A lovely day for a challenging hike, the scenery as expected was exquisite
Category
Serendipitous Discoveries
Summits on the Air
Parks on the Air
2021 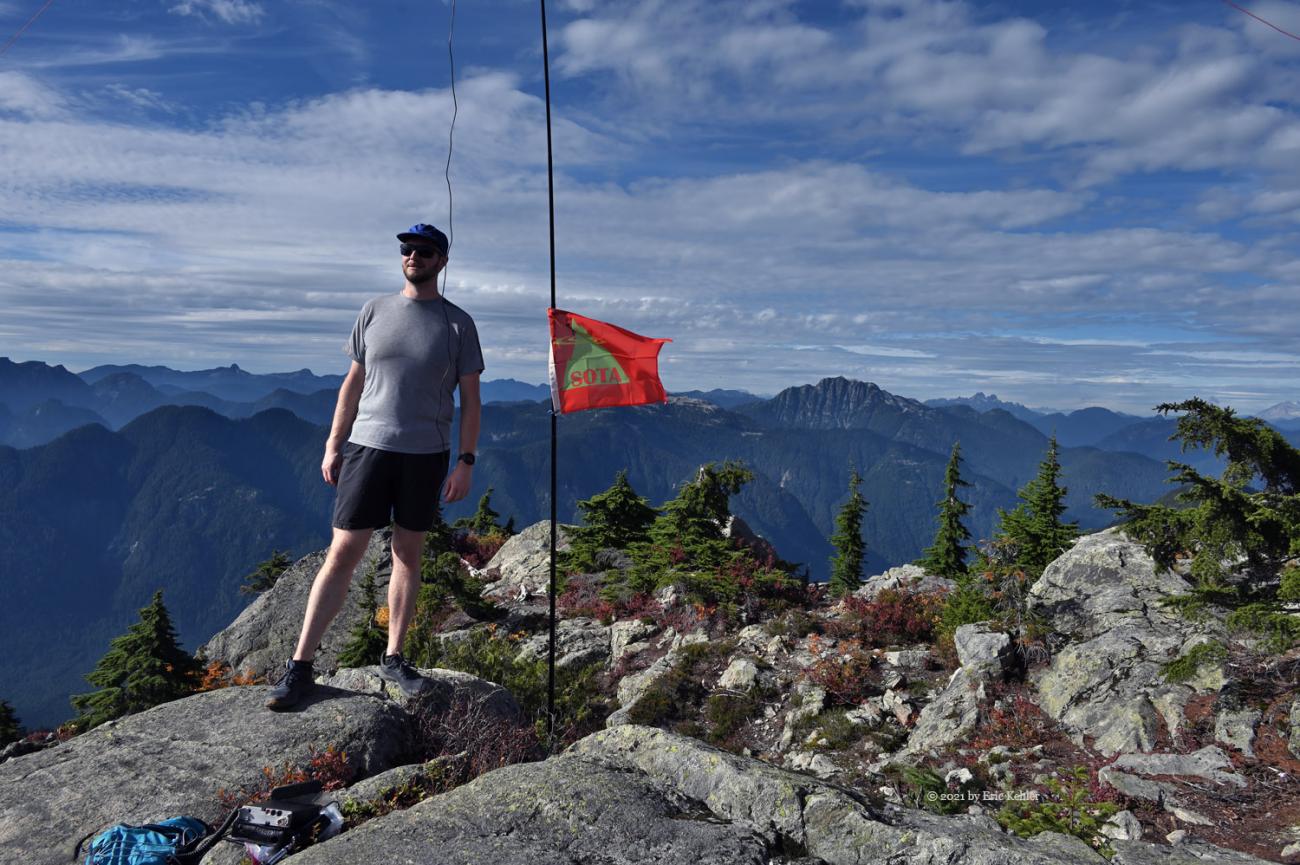 I last hiked Seymour back in 2017 with my wife Carolyn, so I was overdue for a return visit. I had planned to hike the summit earlier this year but the weeks just drifted by and the opportunity seemed to be fading. Then I got a text from John saying he would like to do a hike and I suggested Seymour. The first week-end passed by in rain but the next looked good and we set up an outing.

John suggested meeting in the Seymour parking lot at 10:30 which seemed perfectly reasonable to me. Come Saturday morning I had a nice leisurely start to the day and then set out for the summit (that is after picking up a latte).  There was some delay in traffic on the highway parking lot but I managed to squeak into the parking lot right at 10:30! Once parked I noticed a text from John saying he would be late! So, I relaxed and got my gear prepped for his arrival. Once John made it and joined me at my car we started off for the trail. The lot was quite full and so busy that a parking attendant was helping people fill spots. I was fortunate and actually ended up in a nice location for the day.

On starting the trail, we noticed that there was major road work being done. The service road was fenced off and security folks were ensuring that the crowds moved off the roadway onto the narrow trails. It was fine for us as that was where we were headed. The initial trail section went smoothly and soon we were back on the road at the top of the construction where more security were keeping people away from the road. We continued north - starting towards the next sub-peak. I had noticed on my map that there was an alternate trail for the last part of the trail to the first summit. Neither of us had been on it so we decided to give it a go. It is likely the older access trail. Much less used and much steeper. On the final bit below the first summit, one had to scale a rock face to reach the top.

After an hour on the trail, I needed a longer rest and we stopped short of the rock face that was looming before us. Simple stuff to John but I was a bit concerned. After the rest we followed the main trail to the south side of the rock face and started scrambling up the rock. It wasn’t too hard but definitely steep. As we ascended, we soon passed the exposed face and were into a crevice of trees which made things easier. Next, we reached top of the rock face which leveled off at the base of the first summit area. Lots of people were suddenly all around us. It wasn’t too bad going up but we decided it would be best to use the main trail going back.

Another good rest and we crossed the dip to the start of the climb to the second peak. This is a rocky cute that climbs to the shoulder of the peak. Few go to the actual second peak as it isn’t as nice as the first and the final isn’t much further by this point. I was really struggling by this point to rise up each inch but I really wanted to reach the summit so I pushed on upward and finally reached the shoulder. After more resting, we dropped down to the col between the final two peaks and then started up the final climb. Eventually we made to the summit of Seymour. I was well exhausted by this point and needed time to recover before playing with my radio.

Once rested, I scouted the rock ledge we were on for a way to secure my pole. I eventually found a gnarly tree branch that held the pole firmly enough to use for my yagi.  I attached the elements and radio and I immediately heard a number of stations. In a quiet spot I put out my first call. Immediate response. Within 20 minutes I had 4 summit-top-summit contacts logged and 10 others. On checking later - one of the S2S contacts was over 300km.  As I was doing both SOTA and parks on the air, I needed at least 10 contacts to activate and since I already had 14 and John was having no luck in 20m phone, I gave the band over to him to complete his calls. Done with calling, I told John I needed to use him as a prop for the BC SOTA face book group’s banner. The current one had been there for quite some time and it needed refreshing. So, I set up the flag on my yagi and we took a few shots. They didn’t seem that good, so we reversed direction and attached the flag to John’s mast and tried a few in that direction. It looked better but we needed the wind to help hold up the flag. It took a bit of time and luck along with numerous shots to get some that looked decent. We eventually had had enough trying to get the perfect image and so we began to pack up for the return.

The descent went well to the col between the final and second peaks but then I had to climb back up to that shoulder again. This side is much shorter that the other but it was still uphill and I was finding it a challenge. After a few breaks on the way up I again arrived at the shoulder. Then down to the first peak but that also needs some climbing though not as steep. Eventually we were descending the first peak along the main trail we had skipped coming. It was definitely less steep and I think on my next visit I will go that way.

We made reasonable time descending to the low section of this portion of the trail. The challenge along here was dodging the over-night party-goers that were now flocking up to the first summit. It looked like it was going to be quite the crowd. I guess they all forgot to check the weather report as the rain was coming – waking up the next day revealed a very intense rain storm had started in the night. I’m sure they did ok being young and full of endorphins for the return. But I digress, the last climb up to the service road went slowly again and I used the picture taking excuse to get some rest doing the ascent. The final leg was downhill along side the road work, this went quite well and we even passed a few other hikers. We finally arrived back at the car a bit before 6pm having left a little after 11am. It was a tiring hike but successful in all ways. And being this late, the roads should be unclogged, so the drive home would go quickly.