An amazing view and well worth the hike, I was overdue for a return
Category
Serendipitous Discoveries
Summits on the Air
2015 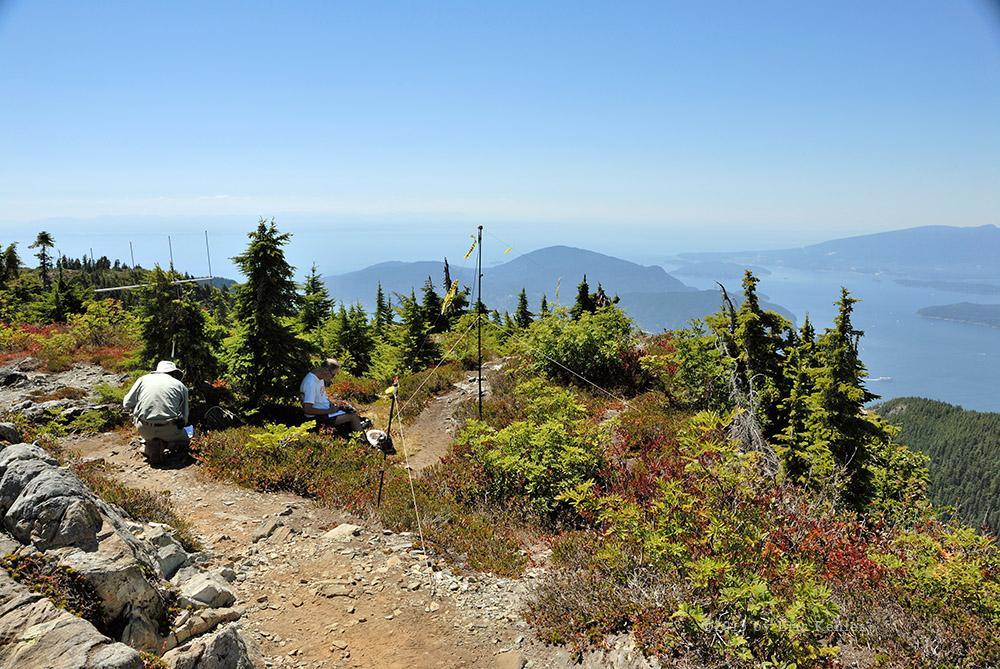 My last visit to Strachan was back in September 2009 and I was long overdue for a return visit. Last time Ethan and I hiked the summit by following the long route which starts by following the Baden-Powel trail towards Hollyburn Mountain there the route to the summit splits off and backtracks at a higher elevation before starting to climb in earnest. It is a long hike through the woods and adds a couple of kilometers for little elevation gain. It is a pleasant hike and fairly well shaded but today I was joined by some friends from my radio club and our goal was to do some radio communications from the summit; we wanted a shorter hike so we could spend more time at the summit. So we decided we would hike up the service road which is a bit steeper and not as scenic but is the shortest route to the summit.

Saturday Morning came and my fellow club members Ralph and Brett arrived at my door ready to take on the task of activating the summit of Mt. Strachan. The day was clear and sunny which of course meant it would be a hot day on the slope. Sure enough the hike was a hot one made worse by the lack of shade along the road which served as our trail. Even the summit had very little shade due to the stunted trees that were growing there. So we were in the blazing sun for most of the day.

Upon arrival at the parking area we noticed that there were a large number of cars parked along the roadway. We were directed by a park worker to park alongside the roadway and start a new line of vehicles. He noticed my Ham license plate and asked what we were up to. We learned that he was also a radio operator but that he had not heard of Summits on the Air so it was quite interesting to him. He also explained that there was a major outdoor event taking place this morning and that was the reason for the number of cars, and loud music.

We geared up and began the hike up the service road. The first segment went smoothly but the sun was definitely beating us down and the heat was rapidly climbing as the day wore on to noon. There were few places with shade on the road but when we did come across a patch we stopped for a needed break from the heat. Even with the road being the short way, the heat slowed us down and it took almost 3 hours to reach the south summit. Once on the ridge we found a shaded rock and had a longer rest to regain some strength for the final assault of the northern summit.

Once somewhat rested we began the final stretch. It took only 10 minutes more to cross the ridge and descend the gully between the two summits. The drop to the col looks quite challenging from the ridge but the actual descent wasn’t too difficult as there were a number of footholds dug into the ground at key spots. Once all three of us were on the col we looked at the climb back up the north peak. This was a bit longer than the southern side as the climb continues straight up to the summit. The trail is easy to follow and though there were a few spots where one had to scramble up some rock faces, it was again not overly hard to do.

It was a welcome relief to finally arrive and get a rest while we ate lunch. There were a few groups coming down the north slope to the col as we ascended and another group of four busy at the summit taking photos. While we were on the peak a few more groups came along but the numbers were much lower than on my previous visit.

Once ‘rested’ Ralph started to set up his Buddipole based wire dipole antenna while I assembled Brett’s portable 2m Yagi. It’s a very nice portable antenna in a very convenient canvas holder, I think it would do well for me in the back-country. It would stand up to the banging around much better than my current one.  As soon as the Yagi was assembled and hung on a branch, stations were lined up waiting to make a contact. I had 5 contacts completed before Ralph finished setting up his antenna! Brett followed with 4 more of his own.

Once the HF antenna was ready, Ralph made a few CW contacts on 20m then Brett did a number of voice contacts. Soon the two hour mark had come and we were all getting overly hot; it was time to pack up and head down. There had been a few more groups on the summit while we were operating but only one chap asked about the yagi and the contacts we were making. All of us were thoroughly impressed with the spectacular views from the summit, they were a good reward for the effort needed to get here.

Once the radio gear was packed we started the long hike back down. This went smoothly even the scrambling down and then up the rock face between the two summits. The walk down the service road was hot but this time, the sun having moved, we had a few lovely patches of shade to break the heat. The return took half the time of the ascent and we were back at the car by 4:30. Exhausted and hot but all happy for the adventure. We were already talking about our next one in August!