Mount Strachan without the Crowds

Today I finished the four summits around Cypress Bowl for this season, all are lovely hikes
Category
Serendipitous Discoveries
Summits on the Air
2020 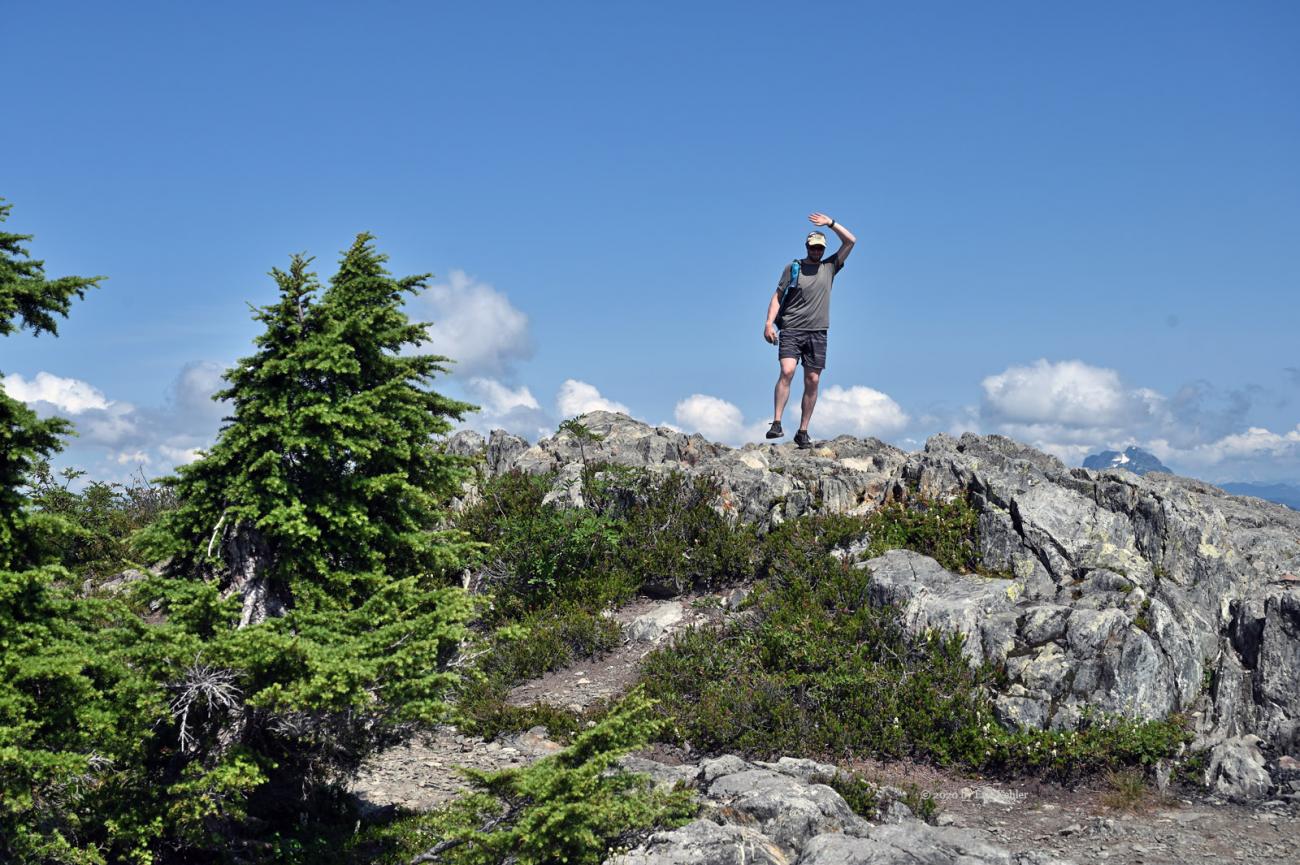 In preparing for today’s hike a friend of mine pointed out that Cypress Park now requires day use passes for the trails. The overcrowding was getting quite severe and actually became annoying on the trails. So, with the excuse of Covid, they introduced the pass system. The hike up Mount Strachan was not on the list as it isn’t as popular. So, I was good to go. Joining me for the day was John Bell. Last year he did all four in one go so him coming with me was I think just so we could have a nice chat as we hiked. It is always an enjoyable time hiking with a fellow activator.

I left my house at 9am and stopped for a latte to enjoy on the hour-long drive. Traffic was light and I arrived at the parking area just after 10:10. There were a lot of cars parked in the outer lot and a string of them in front of me. They arrived at the gate area blocking the main lot and all turned around to find a spot in the outer lot. I drove through the opening as it is there to ‘fool’ the visitors out of the main lot. The main lot was quite empty today and the crowds of people were low! So, unlike two weeks ago. I picked a nice spot to park and started to get my gear on. I still couldn’t believe the lack of people! Either the new passes were working, or the long weekend had people elsewhere.

John arrived at the appointed time and we started for the trail. Initially it looked like it was a closed area but on further reflection we decided the signs were from the winter season, and as two hikers were coming down the slope we intended to climb, we felt it was safe to head out on the main route up Strachan. It was still cool in the late morning sun and I made some reasonable time up the initial road section. We arrived at the spot the proper trail touches the road and John wanted to jump across to it but I felt I’d rather stay on the road until the plane crash monument. So, we continued up the road a bit further and soon arrived at the plaque for the plane crash.

After a brief stop to re-read the sign we followed the trail into the site. We came upon a lower part of the wreckage that neither of us had seen before. After a short moment of reflection and viewing of the aircraft we continued along the side trail to the main one and started up, soon we came upon the main wreckage and then continued up the slope to the shoulder of the south summit. I gathered a few photos of the Howe Sound view and a small pond. We then made our way to the top of the south summit for a brief rest before the final push. Here I noticed that I had never turned on my hand-held to monitor the repeater. So, I turned it on and immediately heard a chap on Black Mountain. I contacted him and said we would be on our summit in 30 minutes. He said he was on Black which is right across the parking lot. We wondered how an American got across the border, later I learned that he was actually on another Black mountain in Washington.

After a short break we moved on and descended to the col between the two peaks and then started up the final 45m meters of vertical to the north summit. About halfway up my right knee started acting up, which was not encouraging but I pushed on the short distance and soon I joined John who was already up there and scouting out a spot to hang his end-fed wire antenna. I Picked spot near him and dropped my pack and took a breather. I was surprised by how few we encountered on the trail and there was only one other couple up here, a few more came by while we were operating but the numbers were very light. Once rested, I set up the Yagi and put out my call. I quickly contacted the chap on Black mountain and made a number more contacts. The frequency was busy with other sota activators on various summits in Washington, it was a sota activation party down there and many were out making Summit-to-summit contacts. I managed 4 which was a new high for me. As the there were many trying to make their numbers, I kept my calling to a minimum and finished with 17 in 40 minutes. Meanwhile John was fighting with his end-fed that he constructed. He eventually set up my 20/40 m dipole and made three HF contacts. He plans to try a few changes to the end-fed matching unit and try again. Giving up on HF he pulled out his 2m handheld and half-wave antenna and made a few more contacts to finish off his activation.

Once we had shut down our stations, we packed them away and started for the trail back. My knee was still bothering me, and the rough trail was not helping, I was moving quite slowly down the roots and rocks. Once at the col John suggested a bypass trail but I said I would need to walk the road down so we climbed back up to the south summit where the service road comes to and we made our way across the ridge to the shack that supports the ski lift. There we started back down the road. The road is a bit longer but definitely easier on my knee. We made good, for me, time down and after a few short stops and some photo gathering we arrived at the parking lot. It was still quite empty compared to other days. John handed me my KX2 that he borrowed, and we sat and chatted for a bit. He related his recent experience as a guide helping to airlift out one of his skiing customers who had dropped through some snow onto an ice layer and twisted her knee. The skill of the helicopter pilots who picked her up sounded quite amazing.

Done chatting, we said our good-byes and made our way to our cars. Me in the main-lot, John down the access road to the sub-lot. I took my time unloading and getting ready for the drive home. I wanted to be a bit more refreshed before starting the hour-long drive. It was a nice hike up Strachan, not overly hot and we enjoyed a nice breeze on the way down. I was glad we weren’t crowded by others as it allowed for more one-on-one time with nature.