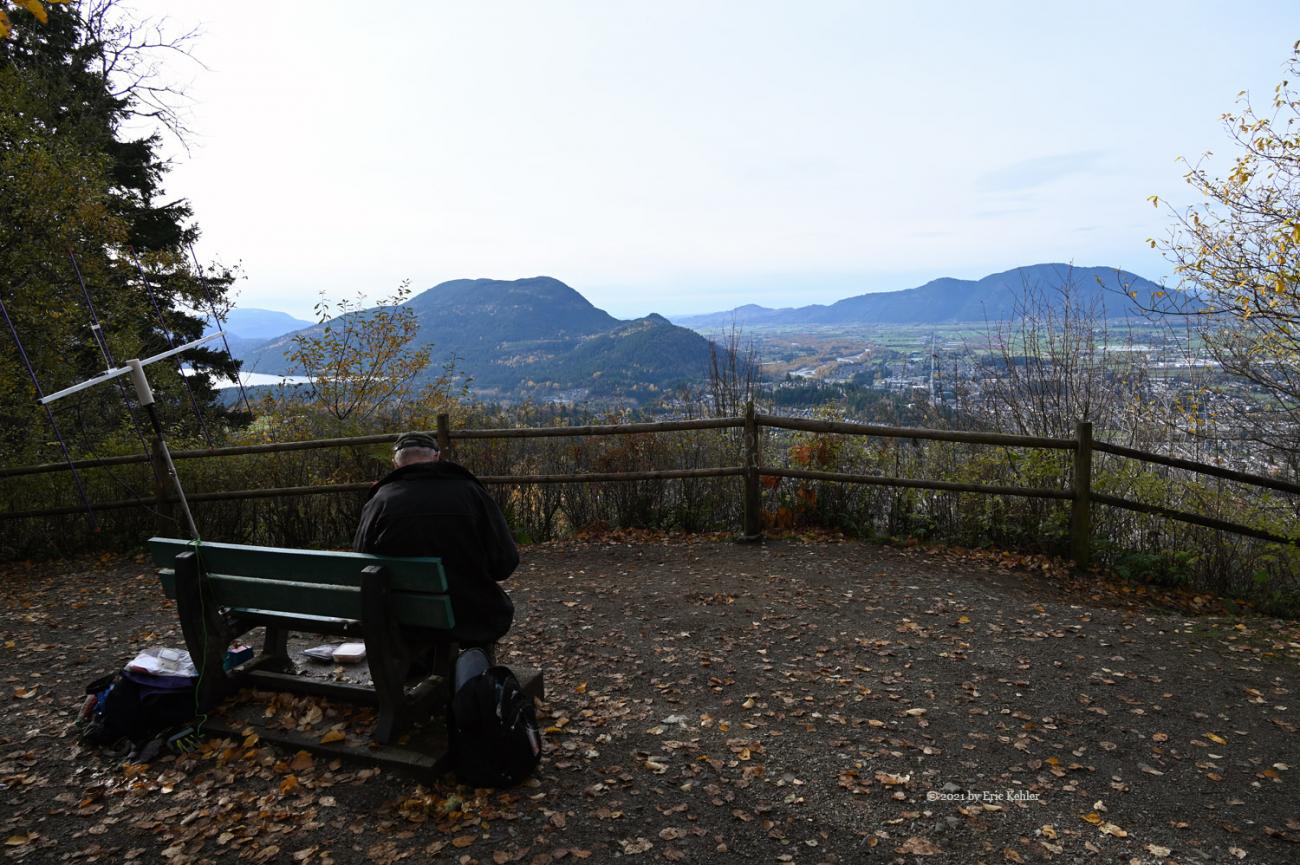 Ralph and I were looking to do our next low summit hike for the fall and chose Mount Thom on the south-east edge of Sardis. This low hill has been populated for a long time but more recently the high-density housing market took aim and has been slowly moving the sub-divisions higher up the western slope. There is a nice road to almost the summit area, it does continue to a few homes and a cell tower but that part of the road is private and so we opted to stay on public spaces. The cell tower is near the summit but the rest of the summit area and the viewpoints form Mt. Thom Park. The upper access area off of Churchill Parkway has a number of parking spots along side the road and the trails are well marked and groomed.

As the weather for the day was improving past noon, we opted to head out at 11 and avoid any rain, we needn’t have worried as the morning turned out to be a lovely sunny morning. Ralph was driving this trip and so I guided him as to the route. We made for Highway 1 and continued past Chilliwack to Prest Road where we turned south and were pointing directly at Mount Thom. After a number of turns onto side roads we arrived at the parking area to find a few parked cars. We pulled in beside one and as we were getting ready to head out its driver came up the trail. We chatted a bit about the trail and she confirmed that it is quite decent and not strenuous. With that, we set off for the summit.

The initial trail takes a dip right out of the gate but then wends its way westward and upward towards the summit. It has a few steep bits but the trail is wide and well groomed with coarse sand. A very easy trail to follow and suitable for carts and strollers. We made good time along the trail and soon reached the viewpoint which is just below the sumit. The viewpoint has a bench which we grabbed for our radios. The viewpoint is just a meter or two below below the summit, so well within the activation zone. It has an amazing westerly view of the Fraser Valley and Cultus Lake. I quite enjoyed standing at the fence gazing out at the valley scene below. While there I chatted with a woman visiting from the Netherlands. She came to visit BC to see the mountains and rivers. Next was a couple, she from Queensland Australia and he was from Quebec. Both had moved here to do river raft guiding on the Chilliwack River.

I had delayed my start of radio calling to allow Ralph to get first contact but now he had his first entry logged and it was time to make a few contacts myself. I had my yagi supported by the bench and pointed west down the valley. I sent my first call and soon had the needed 4 in the log. It was slow going that afternoon as it was a weekday. 2Fortunately, there were a few out there listening to 2m. My first call was to a chap in Saanich (VA7WGT) and although we had Mount Vedder between us, we had reasonable copy on each other. Then next two were to stations in Mission, directly across the valley from me. Then came Don in South Surrey and fellow Sota activator Justin (VA7LUJ) in Vancouver. Things dried up at that point and so I stopped to eat lunch.

While finishing lunch I was called by Ken (VE7HI). Much later I was able to get one more contact in. But by now Ralph had over 20 contacts and we were both starting to feel the coolness of the day. Though the sun was still out, a layer of cloud was moving in and it was reducing the strength of the sun. It would soon by obscured by it. So, since we both had enough contacts, we decided to pack up and head back to the car. The return walk went very quickly and soon we were driving down the road heading to Sardis for a warm drink in a local Starbucks.

It was a very nice outing, lots of time to chat up the hobby with people. The view was very pleasant and though there are more viewpoint with views to the north and east, we were feeling a bit chilled and so we opted to just return to the car, we can take in more sights on our next visit.