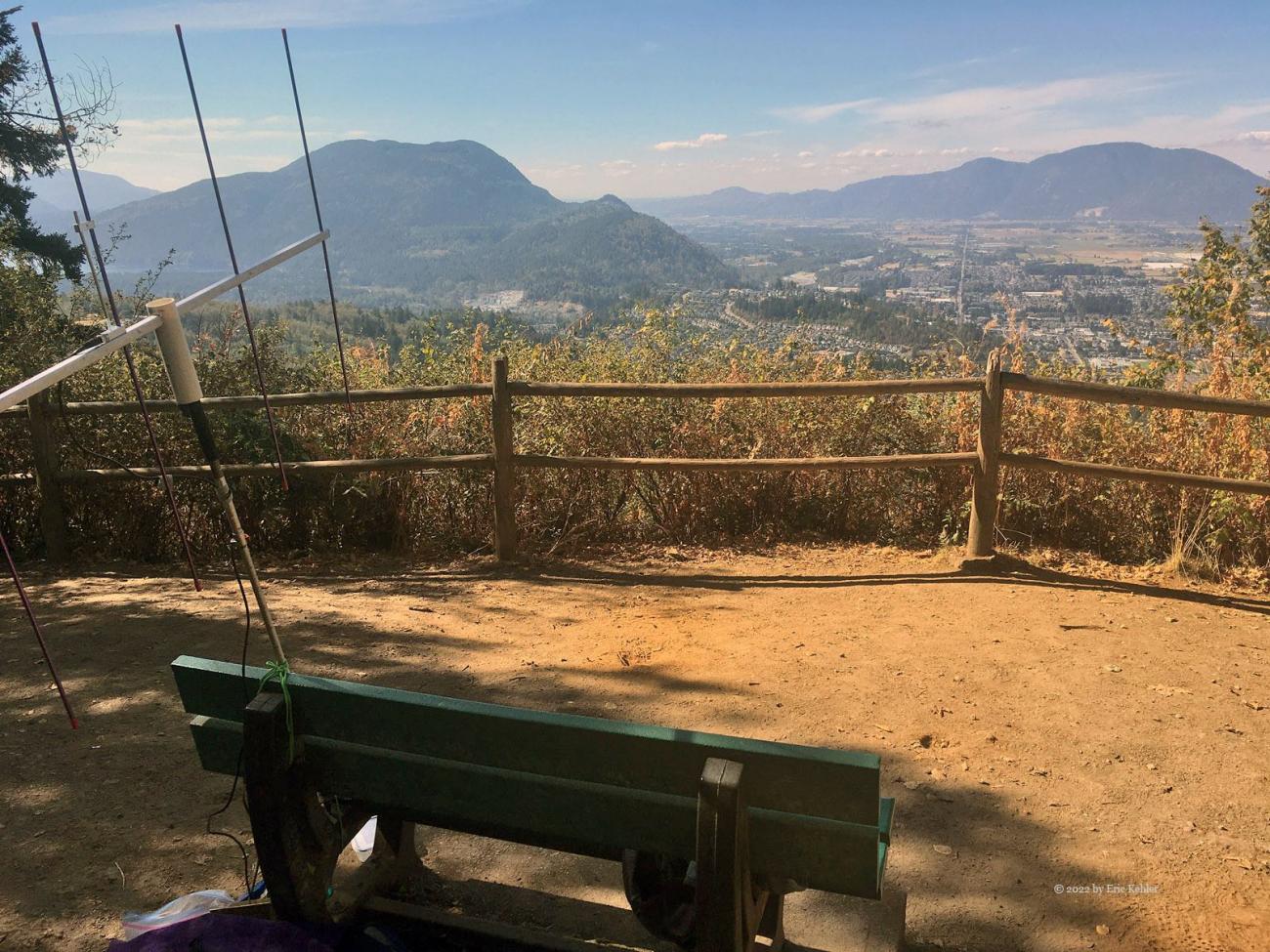 I have been visiting a lot of parks recently and not many summits so when Ralph asked about doing a smaller summit, I was all in. For today’s adventure we selected Mount Thom Park on the east side of Sardis. This small summit is a popular hiking area and has a number of viewpoints around the upper ridge. It also offers some long and short hikes. The longer ones climb the full height of the mountain whereas the shorter ones start near the top. Being a firm believer in walking only that which you can’t drive. We drove to the trailhead of the upper trails.

The drive was an hour and a half from my place which included a brief stop for coffee. The store was quite busy so it took a bit longer to walk out with one’s caffeine delight. Once fueled up with coffee we made for the summit. The main drive is along the highway turning off at Prest Road then a number of winding roads up to the summit area. Portions of the road were freshly paved so it was a pleasant drive. When we reached the parking area where there is room for around 6 cars, there were two there. I selected a nice spot and then we donned out packs and after a brief pitstop we made for the trail.

At this point, the hike is around 800m in length with 80m elevation gain. However, the very first steps out see the trail dip around 15m so the gain is a bit more. We set off along the trail and passed few others returning along it before we reached the top viewpoint. There is a nice bench up there which was unoccupied and so we dumped our gear on it and stopped to enjoy the view for a few minutes. A couple was at the viewpoint admiring the view when we arrived and when they saw our gear they became interested in the ham stuff we were setting up so I was able to talk to them about radio for a few minutes. A number of other groups also stopped buy to ask about my yagi once it was set up.

Ralph selected a point along the pathway we came up on to stretch out his 20m dipole. I attached my walking stick to the park bench and mounted my yagi on it as always. I then pointed it down the Fraser Valley which looks great from here though a bit smoky this afternoon. As soon as I had turned on the radio I was called by fellow sota chaser Ken (VE7HI). We had a quick chat and he mentioned another activator on a Washington summit. Over the next ten minutes I rounded up 10 contacts. One of which was the other activator which gave us both a summit-to summit contact. He was having a tough time getting contacts and asked if I would let those calling me know about him on his alternate frequency. I did mention it to a few but after a few more minutes he called back wondering if he could use the frequency for awhile as the other one was not yielding any contacts. As I had more than enough, I paused and let him use it.

At this time, I stopped to eat some lunch and chat with the people who came by for the view. Some were very interested in the activity and in radio in general. Ralph meanwhile was making his CW calls and had completed 15 so he felt he had enough for the day and stopped for his lunch. I heard one last call around 1:30 from fellow sota activator Gabor (VE7JH) on the island. He was weak but I got him in the log.  We were both satisfied with our number of contacts so we decided to pack up. I stopped to enjoy the view some more as it really is very nice for such an easy walk. Then it was a quick walk back down the route and an easy drive off the mountain. The drive home went smoothly as there were no traffic issues, so nice.

It is a small summit but easy to reach and still offers some lovely valley views. There is a second viewpoint looking north and easterly that I will need to visit one day. But like I said last time, it can wait until next time.