One thought that by mid-July the summit would be snow free, well, it was not
Category
Serendipitous Discoveries
Summits on the Air
2017 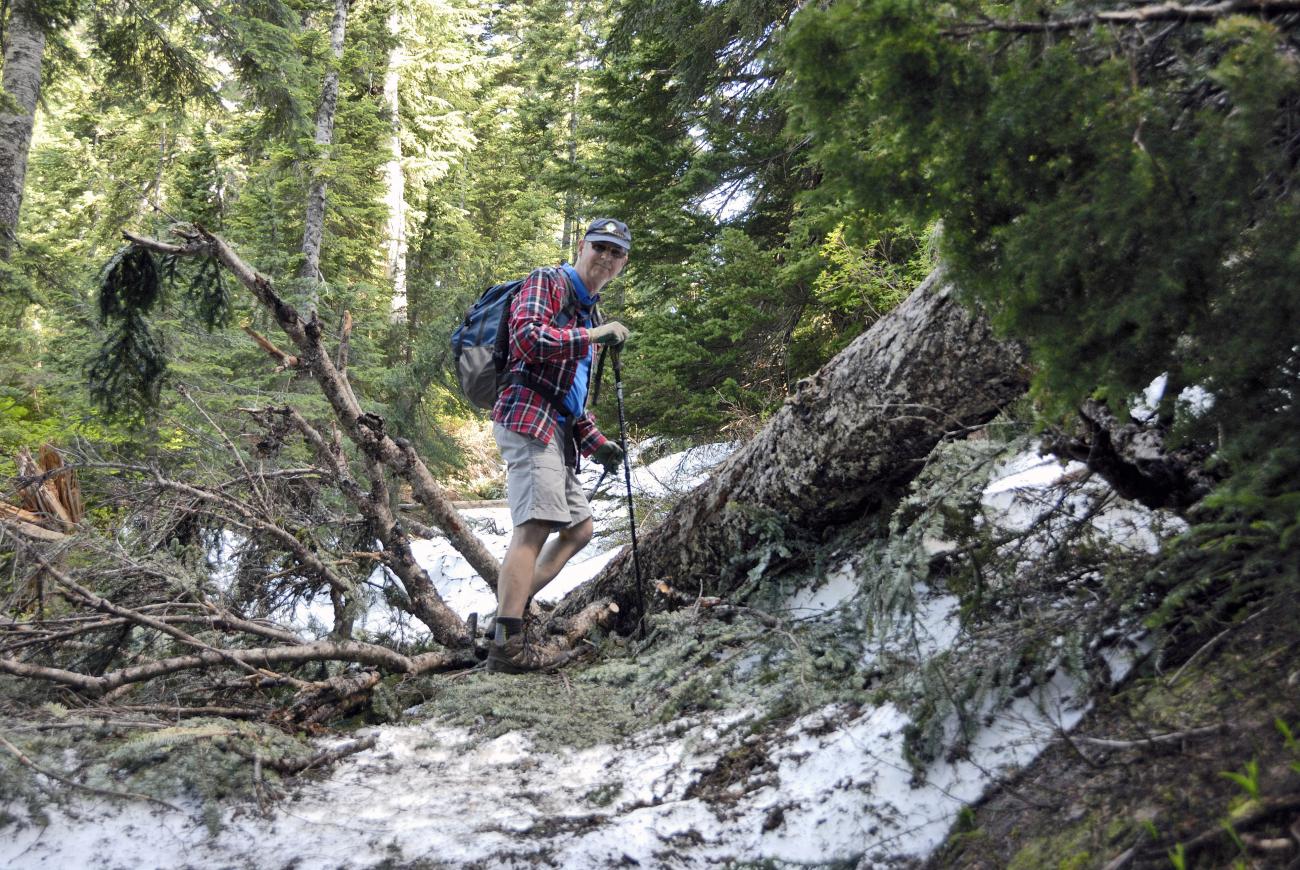 Mid July had quietly crept up on me and I still hadn’t managed a major summit hike this year. I was feeling a bit put out by that but family health issues are definitely a much higher priority. That said, I was able to rustle up a body to join me on the hike and radio activation. Originally I was going with Carolyn but her ear started acting up and she was not feeling up to the strain of a major hike. Ralph had already shown interest in going with us, so he and I met up at my place at 8:30 and off we went to the top parking lot on Hollyburn in his car. It was nice having him drive this time. We did get in our traditional first stop at a coffee shop and then made quick time to the parking site.

Once we were parked it took little time to get our gear on and ourselves ready for the grueling activity about to commence.  The initial section follows a powerline and at one point is a very steep gravel covered roadbed. It is probably the toughest part of the hike as the loose gravel on a steep slope really tires out ones legs. As we made our way up the road we came by a chap guiding a stream of runners who were coming down the steep road. It seems that we came on the same week-end last year – when the 5 peaks race was being held! Funny in many ways, this year the parking was nowhere near as packed. As we continued up the incline we now also had to work to avoid the runners coming down at us!

Having reached the top of the steep section, the road continues fairly level as it juts eastward, here we continued to be almost run over by runners as we made our way to the start of the actual trail. It came none-to-soon! The initial portion of the trail was much as always, a pleasant stroll past some ponds and over a number of root forests as it slowly made its way up a ski slope. Soon however we spotted the first patch of snow off to the side of the trail. Well if it stayed to the side that would be ok, it didn’t!

Not much further along we came to the first bit that was on the trail and we had to walk on it along a dirt path dug into the surface of the snow pack. We encountered a few more patches of snow and then we came by a family coming back down. I asked them how it was further on. They said the snow was everywhere and that they couldn’t get to the summit! Not encouraging news at all. We continued up and soon came by a really deep snow section but the mud trail along the top continued on so we just kept following it and moving forward.

As we came to a steeper narrow section the trail was blocked with a large tree across it. The tree was partially embedded in snow and took some planning to get across. It wasn’t overly hard to get over and once we had passed it the snow stopped for a bit. There we met another hiker coming up fast from behind us. We asked his opinion of the route. He said it would be no problem at all. Yes there was snow but it was very passable. So we kept on, crossing snow covered sections interspersed with bare areas. It was generally fast going and we were actually making fairly decent time. Eventually we got to the shoulder just below the final ascent where there are a number of ponds. They were mostly still completely covered in snow and not visible to the eye! At least the mud path seemed to make its way around the ponds rather than right across them. The final section went without much difficulty and then we were on the summit.

Well first things, take a breather before exerting oneself with setting up radio gear. After a short rest I started to set up my Yagi and Ralph explored the area to see if his planned tree would still be a good choice. The summit area is fairly broad with a small pond on it, the pond however was hidden beneath snow and only a few rocky outcrops were bare. In the end Ralph decided to use the traditional tree, meanwhile I was already logging some 2m contacts. There was another group doing SOTA on Black Mountain right across the valley from us so I very quickly had a Summit-to-summit contact in the log. They apparently were spending the night. I helped Ralph get his line over the tree and then he was on the air making CW contacts down the coast. I tried some HF contacts with my KX2 once Ralph had completed his fill. I managed a call to Carolyn at home which was nice but though I heard others I wasn’t able to contact them. There were quite a number of people on the summit and a number were asking about our activities, my small info cards were quite handy to hand out and people seemed to appreciate the information.

Well, all fun things seem to end too quickly and as time was advancing, we decided it was time to pack up and start down the trail to the car. The way down went without any problems and we made very good time though the final section back along the service road under the power lines always seems to be interminably long. But it did come to an end and one was back at the car taking off some heavy boots and freeing one’s tired feet. It sure feels good to get out of the boots! Well it was a lovely hike and the views were good, enough contacts were made to properly activate the summit, so one could look back and feel good about the day!