Such a beautiful day for a ridge-line hike, with a bit of radio tossed in for fun
Category
Serendipitous Discoveries
Summits on the Air
2017 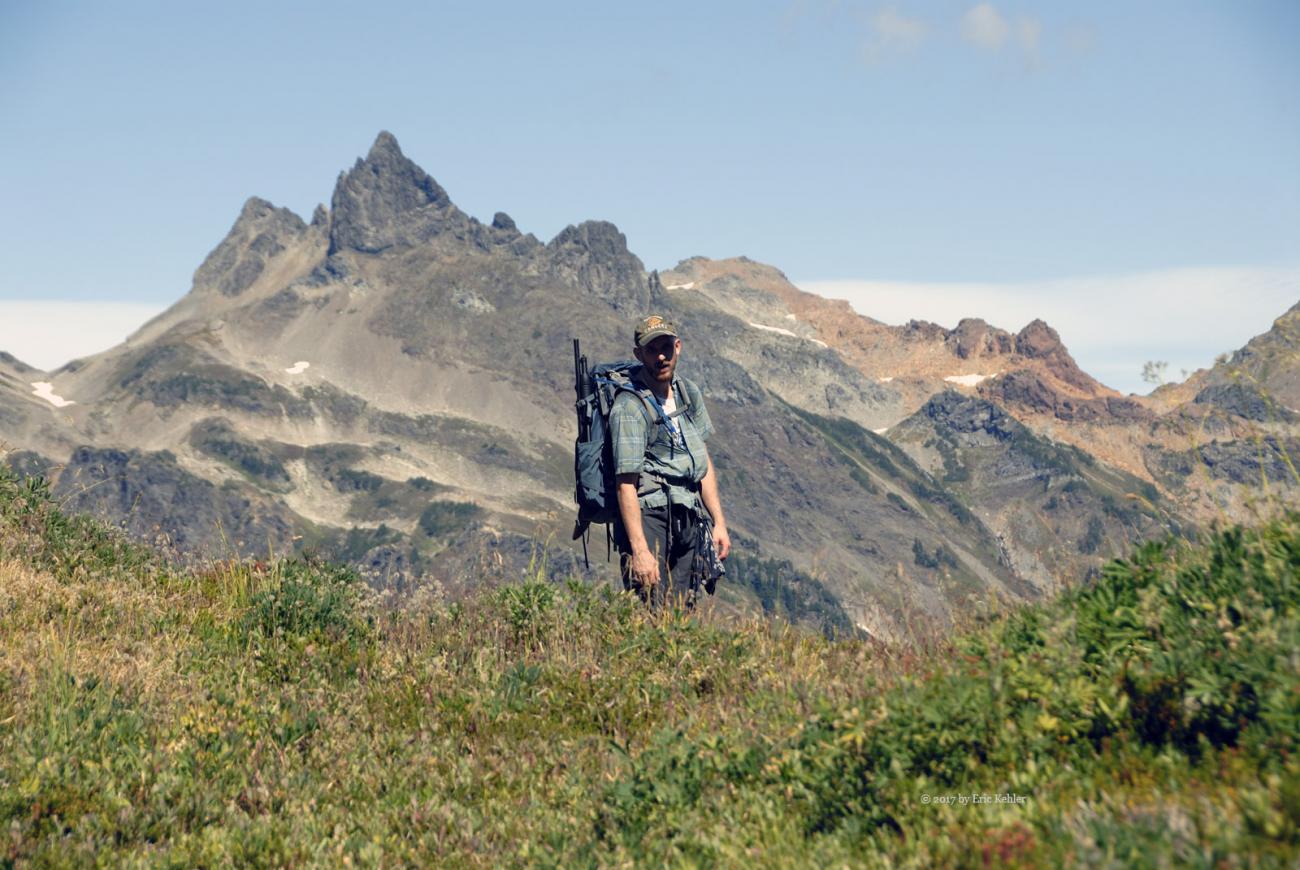 Hiking the local mountains is always a rewarding experience, being the first to activate a summit in the summits-on-the-air program is a fun bonus. Mt. Laughington looked like a reasonably easy summit to hike and as it was not yet activated, I hoped to do so before another claimed the honour. So it was with goal that Geoff and I started off at 7:30am to hike to the summit and talk with my friends back home.

We loaded up the truck and set off for the hike, stopping at the usual watering holes for us and the truck. We even dropped into the butcher shop for some beef jerky, unfortunately they didn’t have any of the regular kind. So the next stop was at the trailhead. The drive went smoothly as traffic was light, soon we were on the FSR; I noticed that the initial section had a name change. It was now the bench FSR rather than Chipmunk. I guess Chipmunk now refers only to the side branch that heads up the valley of the same name.

Across the bridge over Foley Creek and a right turn brought us onto the Foley FSR. This road was very pot-holed, sending us bouncing all over, I really need to get the shocks replaced! Mid way along we were stopped by a chap in a truck coming towards us. He was a German tourist looking for Mt. Cheam. I gave him directions but it wasn’t until he looked at my map that he finally understood the directions. Done with Foley we started up the Airplane Creek FSR and the very rough road it had become. The shot up pickup we saw on our last trip was still blocking part of one sharp turn and stream bed, but we got across and continued up. Not much before the parking area for the Baby Munday Peak hiking trail we were slowed down by a truck inching up the road. Fortunately they stopped at the parking area and let us zoom on by.

We continued up the road to where the trail guide said the place to park was. Here we encountered a truck parked on the side of the road. It looked like it was blocking our path but we were able to get past. Then we came to the over-grown road, it didn’t look too bad so we drove in a bit but soon decided it really was a bit too tight for our big truck, so after clearing a few larger alders, we backed back down to the clear road. There we parked and got our gear ready for the hike.

Once loaded, we started back up the alder infested road. The road section of the hike goes for about 2.5km. It wasn’t too difficult to walk as the alders made a canopy over the road which allowed us fairly easy passage while blocking out the hot sun. It would have been fairly pleasant if not for the steep incline. We continued through the long tunnel across a few switch-backs with the occasional clear area where we were reminded of the hot sun out there. We eventually came to the final segment of the road, this one was a lot steeper and not alderized. About half way along this final bit we encountered a couple coming down the road! Quite a surprise to us. They had done only the first section of the actual trail to the lookout to enjoy the views. After a few words we continued to the end of the road and then started on the actual trail.

The first bit of the trail is actually quite steep as it makes its way from the road to the ridge and a rock knoll. Soon we were enjoying some amazing views from the top of the rock knoll. Here we got to view the actual string of peaks that we would be crossing as we made our way north to the final one. The view of them makes the task look quite ominous. After a longer rest, though it felt not nearly long enough, we started down the far side of the knoll for the first peak along the ridge. Our first challenge was to find our way off of this rock face. It took a bit of study to pick out what appeared to be a faint trail. Once off the rock we were able to pick up the trail fairly easily. It really was a well worn path through the alpine and quite easy to follow.

Soon we were ascending to the first of the peaks, here we entered a huge field of wild blueberries. They were nicely ripe and very sweet. A great bonus for a weary traveler. Fortunately the main consumer of such largesse was not to be found though his presence was easily seen in patches along the trail. The first peak offered some nice views. But the trail continued and SOTA only works from the true summit. By now it was getting quite hot and I was getting much slower. But we pushed on and before long we had passed by a few more peaks. The rock arch was a pleasant view in itself. Finally after a long arduous 3.5 hours we arrived at the end of the trail and the summit.

However, this summit was not the true summit which stared at us from 260m further north. The trail ended here as most hikers would be content with this view and achievement as the way forward was blocked by a 100 foot cliff face the top of which was only a few feet further along the ridge. So after all the effort to find the trail and hike it in the heat, I was stopped by very difficult terrain. I decided to haul out my radio anyways and make a few contacts just I case we could make a claim that the marked sota summit was wrong. Later at home I reviewed the topo maps and concluded that the other peak was no higher. So I will claim a first time activation today – getting past the cliff was not possible for us with the time we had left and our limited skill level.

So after a nice rest, some radio chatting, lunch and picture taking, we started back along the trail to the truck. We were making great time on our way back even though my shoulders had had far more than enough of carrying the pack and Geoff’s knees were giving him stabbing pains with each step.  I was able to gather a few more photos of the surrounding summits and with the lower sun angle the shadows offered a much altered look to the slopes. Soon we had reached the rock Knoll and started to think on how to get up it, but I stumbled upon a trail that seemed to by-pass it. We followed it and soon realized it was the alternate high-speed by-pass route. So now we were past the knoll having avoided one last climb! Down the final steep slope and we were back on the road!

It was a welcome relief to be on the road as this travel would be easier if not for the fact that we were quickly running out of strength to move forward. About 150m along I noticed a white object off to my left and called Geoff back to explore it with me. We walked off the road a bit and soon discovered it was a tent with others and some atvs parked beside it. I called out but no answer came. Geoff figured it was some hunters out looking for game. It was certainly a surprise to find that way out here.

We continued the long walk back down the road and just as our strength was nearing empty we popped out of the tree tunnel and found ourselves next to a white pickup that was beckoning us in for rest and recovery. It is sure a nice sight after a grueling 12km hike. We got our gear off and packed into the truck and were just leaving when I noticed that the exhaust pipe was bouncing more than it should. We checked it and sure enough it had come loose of all its supports. Well if we continued we would likely lose it before we were off the slope. So after a bit of thought and work I had wired it up to the undercarriage securing it enough to be stable I hoped. Checking it every so often found it unchanged and with a final check back at the pavement of the Chilliwack River Road, we had managed to keep from losing it. Now I just need to spend the bucks to repair it.

The hike was a great experience and the views were amazing. I wish the logging road was more passible, perhaps next time I will have an ATV.