After a brief visit 3 days ago, it looked like a good spot to return with its fresh snowfall 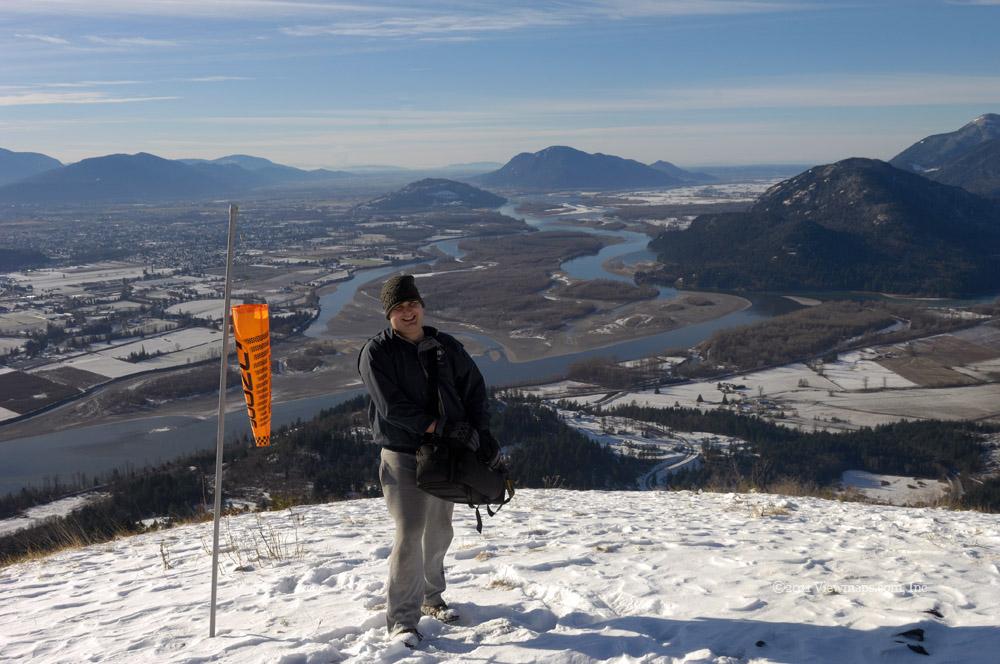 I was hoping to find a second easy access location to test out the new tire chains. So when the thought of Mt. Woodside came to mind I quickly made plans to head for it. And if we run out of road before daylight we were close to the west Harrison for continued driving. We may even get a bonus of having a Paraglider taking off. So Ethan and I got things ready for a quick drive to the mountain and once there we started up the FSR with little delay.

Soon we were driving through patches of the new snowfall while enjoying the clear skies, warm sun and slowly expanding views of the Fraser Valley below. We came past another vehicle where two chaps were busy hunting. They had been roaming a side road but were now parked and were out of the truck chatting. We continued past and on to the side road leading to the launch site. On the access road we saw many tracks of people walking in but no actual vehicle tracks. Despite that ominous sign we started up the side road as it didn’t look all that difficult. As a safety precaution, we decided to put on the chains at a level area before the snow got deep. It took us only a few minutes to get the four chains in place and then we continued up the spur. There was a steep section of the road dropping down to a parking area for the launch site. The chains gave us great traction on the way down – no sliding at all.

The sky was clear on today’s visit and we had a phenomenal view of the Fraser valley and the Harrison River. The haze was low and we could see most of the way down the valley towards home. The mountains were all beautifully capped in fresh snow and gave us a sharp image against the blue sky behind. The sun was out with a bit of warmth to finish off the scene. It was a great place to spend a few minutes and to drink in the beauty of the place. But it was still cold out and before too much time had passed, I was getting a bit chilled in the fingers. So we decided to head back to the truck and start exploring some of the upper sections of the road.

We easily drove up the steep slope out of the launch area without even spinning the tires, the chains gripped that well. Once back on the main line we continued up the mountain. The snow here was broken by a single vehicle track that we followed as the snow depth increased. As we neared the peak the road split, the left continued up to the peak and a radio relay station but had a locked gate. The right continued along the flank of the mountain and so we started down that branch. The tracks we were following ended here and so we were now driving virgin snow! It was lovely and the truck had great traction pushing through the deepening snow drift. We continued for some distance but as the snow depth slowly increased we started to have a few places where we were spinning a bit before the chains dug through and grabbed the road.

Soon we reached an area that started downhill and though we were still able to move we decided to park the truck and do a bit of snowshoeing. We packed up the equipment that we were not taking; I put the truck radio in cross-band mode and made a call to Carolyn at home to fill her in on the plans. We then started down the road on our snowshoes. It was a lovely hike through the virgin powder! Once around the first curve we were greeted with a cliff face covered in icicles. They were a very pretty sight and we stopped to admire the ice for a few minutes. We then continued down the road for a small lake that was off on a side road not far ahead. Soon we came to the side road which led towards Stacey Lake and we started up that path. It was only a short time before we spotted the frozen lake on our left 30 meters through the trees. We descended the short treed section and stood on the edge of the lake.

We noticed that the snow was resting on top of a thin sheet of ice which had water beneath and then a second more substantial ice sheet. It seemed solid enough so we decided to walk around the edge of the lake. Little did we know that after a short distance around, with the top layer being weakened enough by our weight, we would be breaking through it. That was a bit unnerving but It still seemed strong enough so we continued around though Ethan was now walking beside my path rather than in it. About a third the way around I spotted a new issue for us.

When I stopped to take a few photos I noticed that a rubber guard on my camera was missing. Looking back along the path I couldn’t see it, so it was lost and I would need to have Nikon Service put on a new one. We continued around the lake with little trouble except for the occasional crack as we broke the ice in a few places. Once back to where we started, I continued around a little distance to look for the rubber piece but didn’t spot it so I turned back and started to leave the lake and noticed the black rubber at the edge of the lake where we first entered! So I got the piece back, now it needs to be glued on.

Our walk back to the truck went quickly and we got back inside where we could get a bit of warmth. The heat was well appreciated as we were started to get a bit chilled in the feet. The lake surface was a bit wetter than we thought at first glance. The truck had no trouble backing out of its spot and soon we were turned around and making our way back, at least while I wasn’t stopped to take photos. We followed a few more side branches and tried a few steeper cross-ditches that grabbed at our rear bumper but the chains gave great traction and we weren’t slipping anywhere even when moving up slope on a sheet of ice!

Once done with a number of side roads we decided it was getting late enough to call it a day and so we drove down to where the chains weren’t needed and we removed them. Only one had a bit of ice on the catch which needed a bit of tapping to free. On looking them over we found no damage to them, they easily handled anything we threw at them today. We then left the road and started for home along the highway. The rest of the trip was quite uneventful except for me needing to take over driving as we had worn out the youngster.