The Lost Creek area still had much left for us to explore, on today's visit we started on a new side road - the Murdo Creek FSR 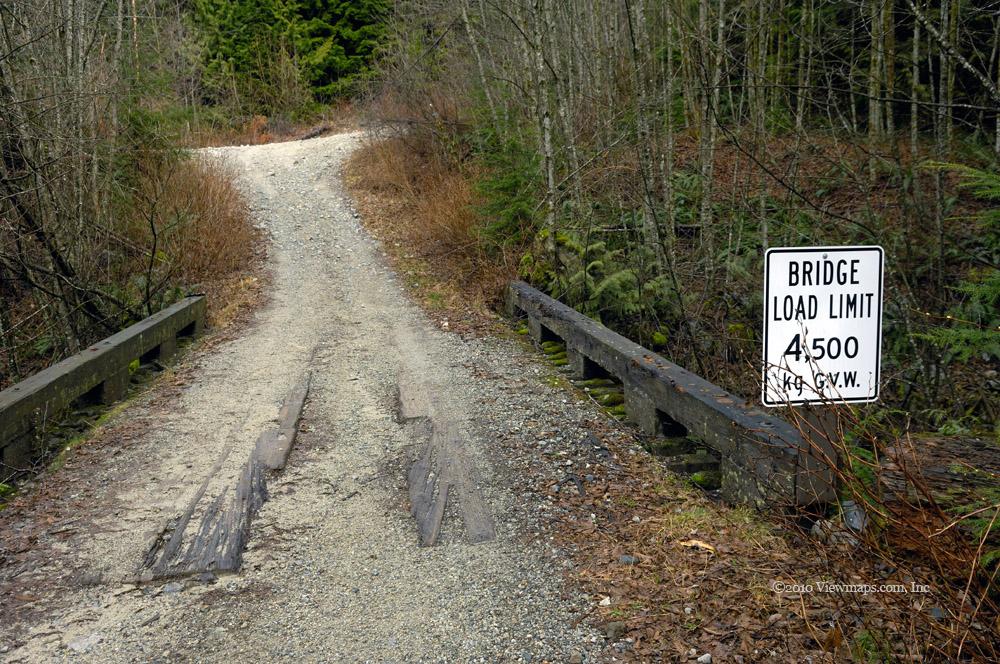 Shortly past the start of the Lost Creek FSR is a narrow insignificant looking side branch that I have driven right past over the years. This branch is actually the start of the Murdo Creek FSR which opens up into a fairly significant area for exploration. So today we decided to see what it would present to us. The road was little used and though the bridges were not overly solid they were rated enough for our truck. We gingerly picked our way over a couple bridges and up the slope eventually reaching a level stretch with a bit of a view looking down into Davis Lake. Geoff noticed a current trail marker on the side of the road, so we stopped so he could explore the well groomed trail while I grabbed a few photos. Later we learned that the trail was the first leg of a hike to Mount St. Benedict which follows along the FSR for the next segment.

After checking out a number of things that caught our eye, we set off further up the road passing a couple of side branches which will require an ATV to try. We were eventually stopped by a slide. Just before the slide was a lovely waterfall where I took a number of photos. As I was shooting the falls, a group of hikers making their way up the trail caught up to us, they were quite surprised to find a truck up here - perhaps a bit disgruntled with having hiked this far and not needing to. Geoff gave them some directions from our computer map and then they continued on past the slide on their way to a small alpine lake.

Once done with shooting the falls we returned back down the road where we met a truck making its way up. They had a pair of dogs running alongside the truck - both were quite tired, perhaps not the wisest way to treat a dog. Soon back on the Lost Creek FSR , we drove past the cars of the hikers parked near McDonald Falls. By now we noticed that the clouds were getting thicker and it was already starting to spit rain at us, not a day I would be going on a longer hike! Once past Davis Lake Park we enjoyed a cloud obscured view of Stave Lake and the surrounding hills. It was interesting to view but did make for a dull setting - not really that good for photography.

We drove by a side road and decided to follow it to Stave lake. The first section of the road was quite passable but soon we encountered some very steep sections - bending our right running board as we continued on. We finally got down to a small creek bed which we drove along a short distance. We had been here once before in the Pathfinder but couldn't make it up the far side bank. That was a few years back, today the climb up the far side was quite worn down by ATV's but it would have required us to winch ourselves up and in the worsening weather it was not something we long considered. So it was back up the road where we again bottomed out on the dips that challenged us on the way down. We drove up another short spur where we enjoyed a view of the lake while we ate lunch.

Back to the main road and on up to where we could get a view of Salsbury Lake from above. Unfortunately the trees had grown quite tall and there was no good view of the lake. We did finally get a glimpse of Salsbury from a little way past the lake but the weather was rapidly deteriorating and after capturing a few more images of the cloud covered lake and mountains we decided to call an end to the day and head back home. I thought we could try a few of the roads that exit out onto the paved roads along Miracle Valley but each one was blocked by private residences and offered no access to the back woods. This was most disappointing. We did come across one gated driveway with some serious keep out additions. They really were pretty serious at keeping people out. Later I learned that it was a legal grow-op of some size so the strong gates made a lot of sense.

Though the weather was not that good I did discover a new area with a lovely waterfall, and a possible hike to do come summer. The trip also re-emphasized just how desperately I need to get into an ATV to explore those many areas just out of reach for our truck.