No Room Left on Mount Cheam

Cheam has become extremely popular for hikers, it is now crowded on the summit
Category
Serendipitous Discoveries
Summits on the Air
2019 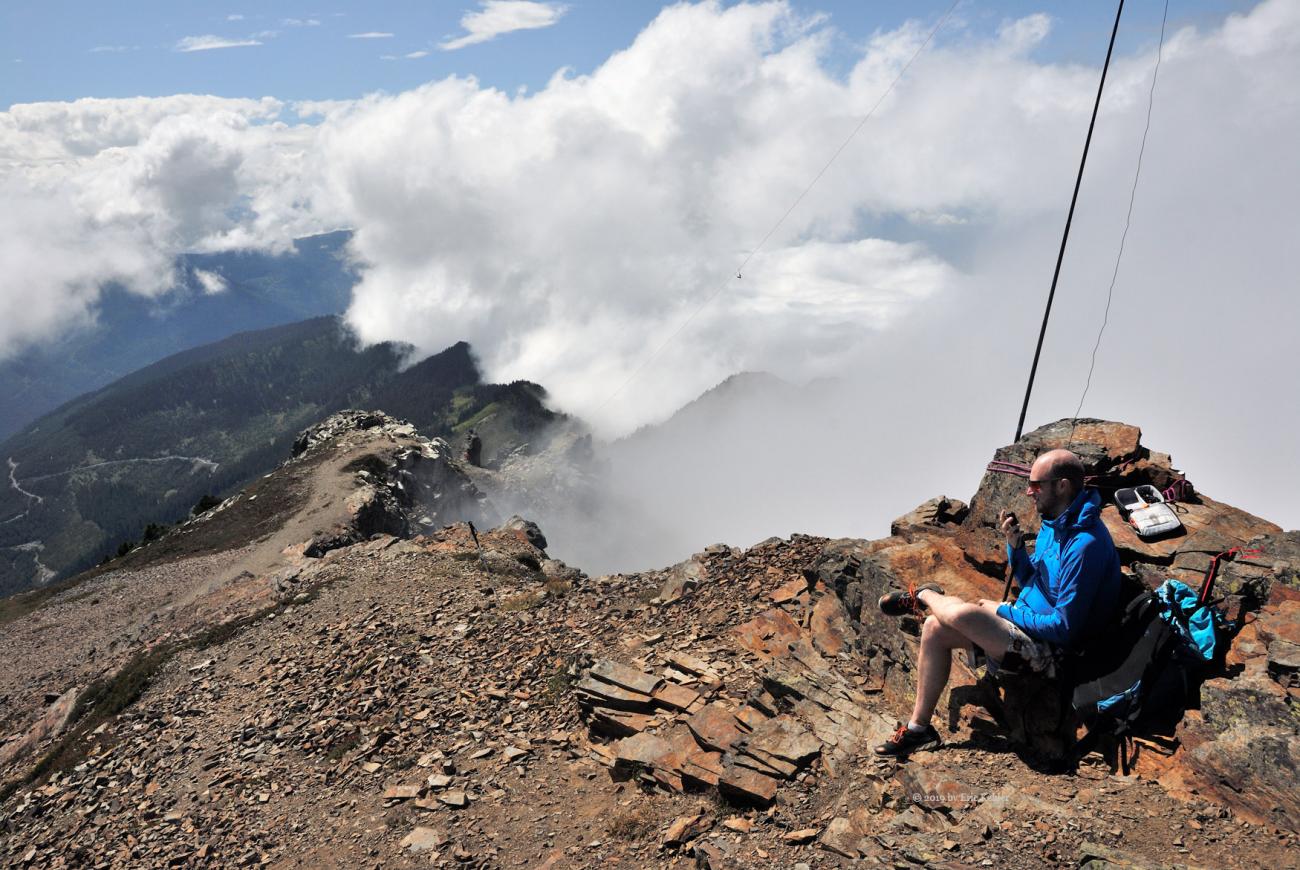 I have hiked Cheam many times over the last couple of decades. It is always a very pleasant hike and the views are so worth the effort. Unfortunately, lots of others have also learned of the beauty and the accessibility that the numbers coming has grown rapidly, but the mountain is not without its own form of crowd control. My last hike up Cheam was in 2016 so it was time for another adventure. Last year I did Lady Peak beside Cheam so I had been here fairly recently but it is an easy 6 point summit so regular visits are in order.

In my planning for this season, Cheam was on the list from the start, I had asked John if he was interested and he said he would like to go. So I just needed to find a time when we were both available and hope for good weather. Well the day finally arrived. John arrived at my place around 7:45 and we quickly loaded up and set off for the trailhead. We hoped we left early enough as the crowds quickly over fill the small parking area on a week-end. Last year we came mid-week and shared the place with one other. Today it would be different. We made quick time to the start of the FSR and there we switched to 4x4 mode and dialed in the road frequency on the radio.

The drive along the bench road was fast, we had a jeep tailing us and we assumed it may be following us the whole way – it did. Now the Chipmunk FSR is the main road going from the bench road to the trailhead. It is a very rough road with some large steep cross-ditches and many deep pot-holes. Not a road for street vehicles. The road is really not a safe one to drive for people not experienced with 4x4 driving and so the mountain does crowd control by keeping out the less equipped drivers. Despite the extreme road, there are many vehicles driving it at a snail’s pace, bottoming out and still continuing on. Right at the start of the road there is a huge cross ditch that should warn people off but today I even saw a small car starting out on the road! All I can say is that it was a foolish decision.

We finally arrived at the parking area having left the jeep behind. It was already mostly full but we found a spot to park and then we got our gear loaded and we set off for the trail. After a 150m I noticed I had dropped a glove and so I returned to the truck to find it. The glove was on the ground near a log we had to cross. Glove in-hand I returned to John and my pack and we continued along the road to its end. Next was the descent into the bowl formed by the flank of Cheam and Lady Peak. It really is a wonderful spot and a lovely place to camp except I noticed that there was now a no camping sign posted!

Continuing on to Spoon Lake and then the initial steep section we made good time to the upper shoulder and the alpine meadow. Here I noticed that many of the side routes had been roped off with warnings to stay on the main trail so that the area can heal itself. This was new since last year, I guess the crowds were eroding too many spots along the fragile meadow. It was good to see the attempt to improve the slope and I hope people stay to the designated trail. It may be a bit longer but it is the easiest route. We continued along to the point where the Cheam and Lady trails split and there we took a longer rest.

While resting another group came by with plans for Lady Peak, they asked about the route and John gave them some detailed directions, they seemed quite surprised that he said it would take them between 2 and 3 hours more to reach the summit. They thought it over and then continued on their way. We watched them a bit as we continued up Cheam. We continued to make good time along the trail to the summit. The weather was warming up a bit as the sun was peeking out from the clouds more often but it was still a great day for hiking and not overly hot. Soon we arrived at the top ridge line that continues right to the summit. Continuing up to the summit, there we and took a few moments to enjoy the view. Unfortunately clouds were blocking most of the valley view and with the numbers up there we decided it would be safer to set up our antennas a short distance down the ridge where the crowds were less.

So we dropped down a short way to where there were some good rocks to use for supports and we set up for the radio work. I soon was on the air with Ralph talking to me as my first contact. Next was Mike from the southern Island and then Ken from home in White Rock. So contacts were going well for me on 2m. John was having much less luck on HF even though he was using my KX2. With the number of people up there, I had several groups come by to ask me about what we were doing. In places like this one can share so much about the hobby which is why I pack an info card that people can take way with them. After John and I had enough contacts in the log we packed up the gear and started the trek down. A bit below the summit we stopped to view Mount Archibald to the west as we hoped to try it before long. There aren’t the trails available to it so we need to plan a route and looking down on the summit area helps with the planning.

Once down to the upper col we took a short diversion to the north cliff edge to enjoy a view of Waleach Lake far below. It truly is an amazing view from there. The clouds had parted enough to give one a great view of the area. The rest of the trip down went smoothly though the final leg along the road always seems to take interminably long. Even as we reached the truck more groups were just setting out for the trail. It really is far too late to be starting out for the summit but even a hike to the bowl is worth the effort.

On our drive out we took a short detour to explore a road spur that may be a route to hiking Archibald. It was pretty narrow in places but we managed to drive it to a wide section where we could turn around. Done with exploring it was time to head home. We were making good time back as there were no vehicles in front of us but then we came to a pair trucks inching their way along. Once would think that they would have noticed our quick approach from behind and that we may be just a bit faster than them and that they could let us pass. But no, they just kept hogging the road holding us up as they slowly worked across each obstacle. Perhaps they thought that no one would be any faster than them but after putting up with their slow pace for too long we finally reached a wide water filled section where they hugged the right side, I quickly zipped past on the left.  A jeep also followed me past and now we could make much faster time. The rest of the Chipmunk road went much nicer now that I could cross the ditches at a decent rate. The jeep soon was left behind as well.

Well we finally finished the Chipmunk road and the bench and pavement was before us. We reverted the truck to city driving and started out for the last bit to home. Being the first day of the long-week-end the traffic was not that heavy so we made good time until we left the highway. Here we encountered a traffic jam as the next over pass had a traffic accident and people had diverted here. At least we were able to get away from it fairly soon and the final drive was fairly light. A great hike and activation. The vehicles on the Chipmunk road amaze me, I really don’t know why people are pushing their luck but that is why there are so many car parts littering the road. I guess it adds to the adventure. And did I mention that as we left the parking area the number of vehicles lined up along the road went on for quite some distance. It really is popular but people really need to plan for a very difficult road. So, that was an easy 6 points for SOTA and I look forward to my return visit.