A fun day exploring an area, which had been was closed off, with my son and two grandsons!
Category
Serendipitous Discoveries
2018 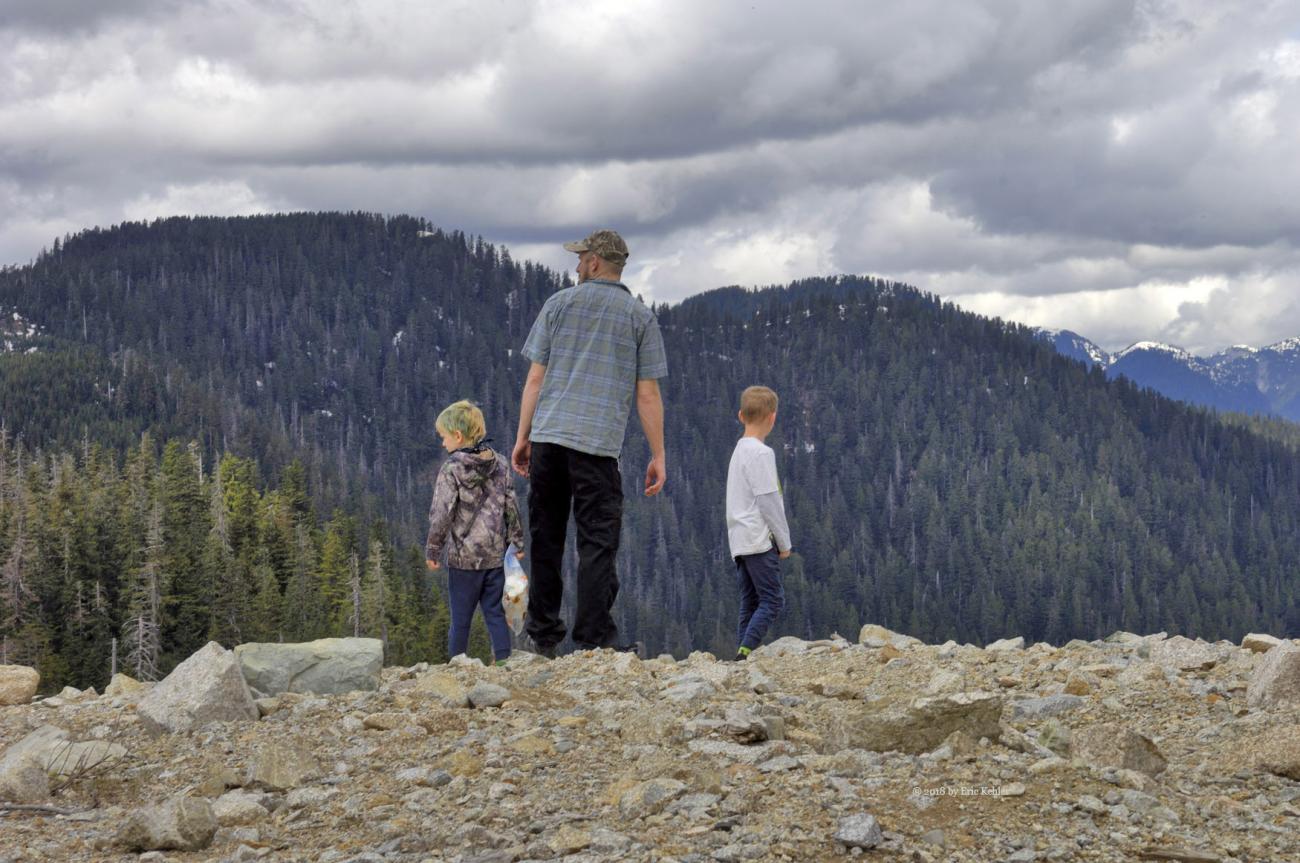 Afew weeks earlier I had discovered that the gate blocking the Norrish Valley was no longer closed. On that day I drove in a ways and decided it really needed a full day to explore the area. Well today was that day, joining me for the adventure was Geoff and two of his sons – Liam and Ben. It was Ben’s first time in the hills with us so it was going to be a special day.

As usual we started off with the normal stops for coffee, fuel and beef before setting out for the hills. In all it went quickly and we were soon on the start of the logging road. Ben was quite annoyed at first at all the bumps and jerks we were experiencing as we drove the start of the mainline. We didn’t press the point that this was actually one of the better roads. In no time we had arrived at the nasty gate and sure enough it was open. So in we went and made fast time to the 18km point which was where I turned back last time.

Today we stopped at the wide cleared area as I did before and let out our two young ones to stretch their legs. Ben was quite amazed at the sights, he ran around climbing some rocks and piles of logs. Next he wanted to shoot his air rifle. Geoff setup a coffee cup for a target and then worked with Ben showing him how to hold his rifle and aim it. Though he tried to get him to aim properly Ben was more interested in just firing it off in the general direction. Safety instruction was paramount in Geoff’s teaching.

Once we had rested a bit we piled back into the truck and started up the valley to the next fork. This fork was supposedly the current mainline around the lake and on to the next valley. So we turned up it and followed the major branch at each turn. Our first direction led us to the service road for the transmission line. We continued to the first tower and there we stopped to have a look. The sides were quite steep which was creating a concern in Ben. He wasn’t sure he liked being out here.  We coaxed him out of the truck and soon he was just fine. Liam on the other hand had gotten too close to the edge and slide down slope about 10m. It was to slippery on the steep incline to come back up directly so we directed him sideways to where the slope leveled off a bit. He was soon back up with us.

The next fork led us to Davis Lake. On my map this looks to be the major route but just past where the road starts around the lake the road is washed out and beyond the washout the road is well over grown with much windfall covering it for as far as one could see. Definitely not the main route anymore. We stopped to explore the end of the usable road the boys looked over the small stream and then some huge rocks which formed a shallow cave. Once we had returned to the truck we backtracked and then  continued up the current mainline heading east.

The road forked again with us choosing the lower right-hand direction. This continued along the Norrish Creek valley heading south-east. The road was quite drivable but we eventually came to a deep washout with a high embankment blocking part of the road. In a shorter vehicle it would be very doable but in our truck it would take some careful planning and the return would have required winching. So after gathering a few photos we returned to the previous fork and started up a very steep road. This continued well up the slope and eventually we came by additional branches one we tried which looked like it would continue around the slope to the next valley but it stopped us very quickly with deep snow. We decided to follow another fork which led us upwards eventually stopping just below the ridge where the towers were situated. It was a broad level area with a great view of the valley below. We had it to ourselves and as it was lunch time we decided to cook our meal here while enjoying some sights, sun and even a couple of radio chats.

While we rested, Geoff did some target shooting with his .22 and Ben continued to shoot his air gun. The lower part of the road was restricted for shooting but way up here we were out of the zone and so could do our little bit of target practice. Once done with lunch and shooting we started back down stopping at each branch to explore the options, at the first stop we discovered a very interesting ground vine covering some rocks, the stem of it was incredibly strong.

We continued trying side spurs as we descended to the mainline but all were quite short and we were back to the bottom very quickly. By now we all felt a bit worn out so we decided to call it a fun day and start out. The bumpy return went without incident. There were a few ATV’s out but the place was quite empty, pleasant to visit. Ben seemed to quite enjoy his first adventure with us. So I am looking forward to our next one.