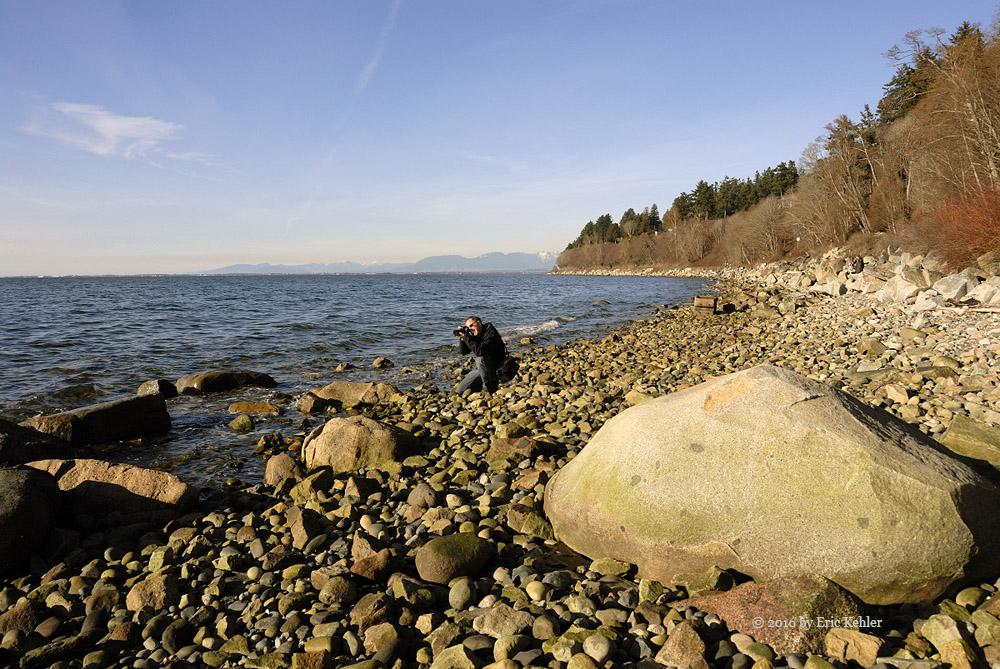 Beautiful is a good word to describe the day and scene. The sun was out with a touch of cloud and it was warm for February – 15C – so I felt it would be a great day to visit the beach and gather some photos while enjoying the sights and smells of the fresh sea air. I had mentioned my plans yesterday at coffee to my friend Ralph, and he thought it would be a great adventure and so he asked to come along.

Well lunch came and went and it was time to head to Crescent Beach, I swung by Ralph’s place and gathered him and his camera gear into the electric car rather than my big truck and we set off west along 20th Ave. Little did we know what was waiting for us around the next corner. We drove along 20th enjoying the sun and light traffic to 128th and turned right to head for Crescent Road and the descent to Crescent Beach. All was well until a block from Crescent Road, here we encountered a line up. I didn’t think much of until I got close to the corner. Here I saw a stream of cars coming up from the beach. Naively I turned towards the beach and soon joined a slow moving column of cars also heading down there. It was crowded, I took a short-cut to Blackie Spit but soon rejoined the line, they were all looking for parking. The place was over-full! By now I was quite convinced I didn’t want to stay even if I did find parking. So I turned around and started out.

I did find a few road-side spots along the side road but I didn’t want to fight with the crowds to get a photo. So we tried to leave the beach area but the line-up to get out was worse than the one we had coming in. We eventually got back onto Crescent Road and quietly turned off it to head for Ocean Park and the 1000 steps. I was hopeful the crowds weren’t clogging up that spot as well. We arrived and found a couple of decent parking spots and quickly slid into the closest one and got our gear ready for the walk to the beach.

The steps were a breeze to walk down and Ralph and I enjoyed the easy route down. We then walked the path along the tracks to where they end at a short tunnel under the tracks. Here we walked through it and onto the beach. There were a few people around but very few in comparison to Crescent Beach and likely White Rock. We soon found many enjoyable sights that caught our eye and enticed us to stop to make a permanent collection of light photons onto our camera sensor. Ralph soon spotted a collection of carefully placed rocks that were balancing upon others. They were quite remarkable in that they could even stay that way. I know when I try to stand up a rock it very quickly falls over. Perhaps they were glued, it sure seemed like they must be. But we did gather a good number of photos of them while they were upright.

We continued south along the rocky beach stopping at objects that caught our eye. I found some bull kelp that caught my eye and then a number of rocks jutting out into the water with a cloud draped San Juan Island as a back-drop. It was a very satisfying view. I stopped to gather various angles of the rocks and distant mountains before just sitting on the rocks resting and drinking in the beauty. The location brought back memories of my youth when I lived not far from this spot and I would come down here just to enjoy the scene. The smell of the salt air and sun glistening on the wave tips in the warm air is a very relaxing yet energizing combination, I really do need to get down here much more often considering I work just up the slope from here!

After gathering many photos along the rocks I heard a distant train and I thought it would be nice to gather a few close-ups of the train as it passed. So we climbed the rocks to track level and found a spot to capture the train. But it never came! So we wandered back to the trail along the tracks hoping for a train unfortunately we were soon back to the tunnel and so we dropped down to begin the more arduous task of ascending the stairs. But as I started along the path I noticed that Ralph was busy photographing the colourful graffiti covering the walls of the tunnel. I stopped to look at his subject and decided it was interesting and so I also took a few photos of the colourful art work. Done with that we started up the steps. I decided to capture a running sequence of the stairs as I climbed. By the top we were still in good shape and I remarked at how much easier that climb was than the last time I was here many years ago.

Once back to the car we looked around and decided to head to the park at the end of the road for an upper view of the sights we enjoyed below. Here there were more people gathered but it was still rather light in numbers. The view point at Kwomais Point Park really is quite spectacular. It was now getting on in time and I had a family dinner to get to so we set off for the car in seriousness this time. Just as I was reaching the car I met some old friends from my days living here and we chatted for a few minutes before Ralph and I left for home. It was indeed a lovely adventure out on the rocks, enjoying the sun, probably better than we would have had at Blackie Spit!