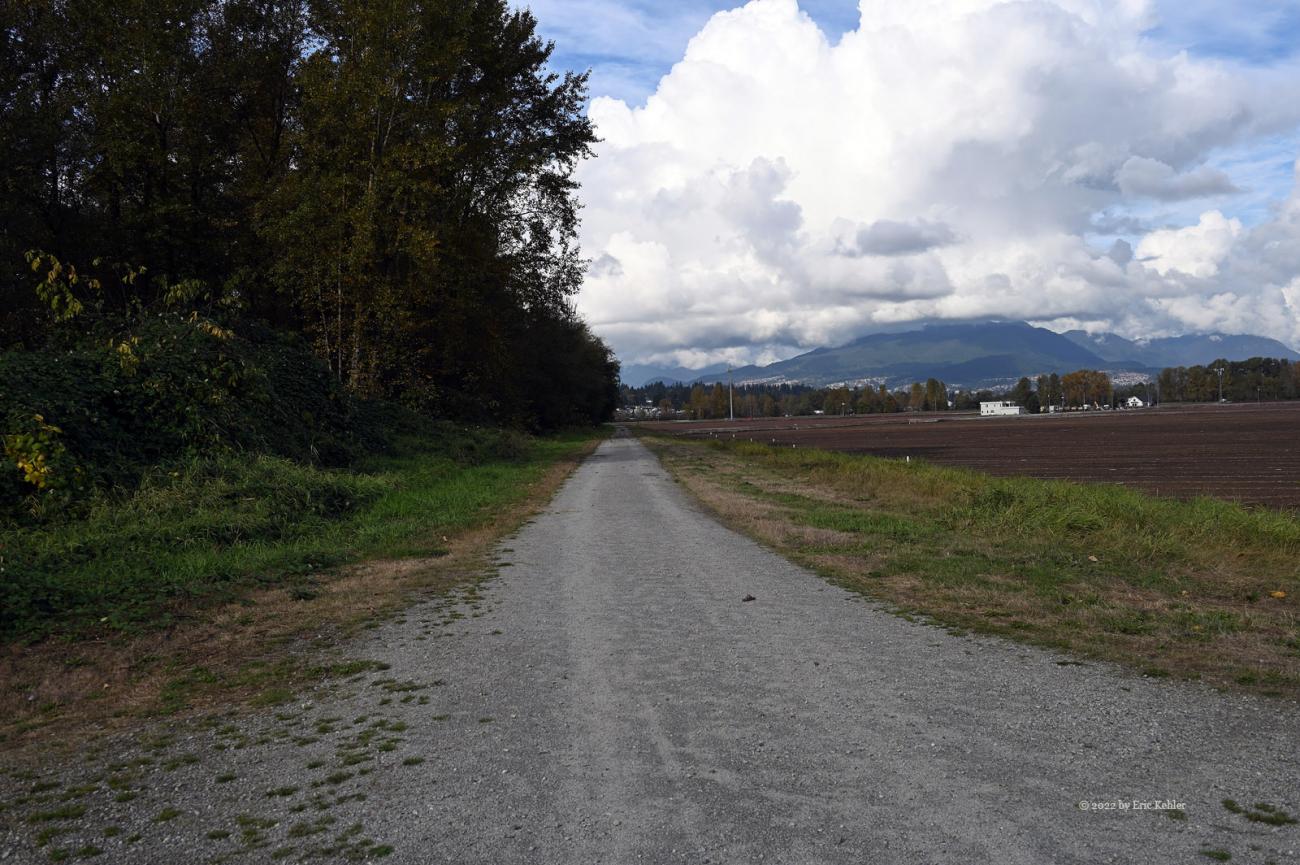 My visit to this park was an on and off series of events. It was delayed by the intense smoke of early October then I developed a cold and the rains finally came. When a nice day opened up I was set to go but I discovered that a local park was now open so that took priority. Well, the day finally came for activating the Pitt River Greenway Park. This park is very long and has several places where roads end at the park border, any one of which would work for me. I chose the entrance at the end of Ford Road. It looked like there were a few parking spots available and was not in the busy section. Also there seemed to be some open spaces near the entrance.

So, on Tuesday shortly after lunch I set out for the end of Ford Road. The drive was expected to take 35 minutes. I followed the navcom route and made good time to the parking area. There were two cars parked but still room for two more. I slipped into one of the open spaces and grabbed my camera for a short walk around the area. Just below the main dyke walkway was an open field area which would be ideal for my needs. Having selected the spot, I returned to the car to get my gear. As I was loading the cart a chap came by wondering if I had found a cell phone, after saying no, he went on his way to continue his search.

I pulled the loaded cart up the small incline to the dyke and then down the far side. I continued to the open area I had selected and then checked my compass for the south direction. I then oriented my antenna for SW to NE and started to set it up. The set up went quite quickly and I was soon ready to start calling. Meanwhile the chap looking for his phone came back having found it. My new first task is to check the RF noise floor, it was S2 so the new noise eliminator would not be needed today.  I then checked the active parks list to find some parks on 20m but they were inundated with traffic so I decided to move to 15m where life was quieter.

I found another park activator on 15m and called him and soon had my first contact. I then dialed in a second activator and logged that contact as well. They were the only two listed on 15m so I then found an open frequency and started calling for myself. I soon had a contact from New Mexico in the log followed by California and Florida. Over a half hour period I managed 15 contacts. Not nearly as fast as my previous park but still quite good and I did have enough. As I was about to pack up my friend Ralph texted me from his home and we worked each other on 20m and then tried again on 15m. 15m was very tough but we did get through.

Done with radio I packed away the gear and loaded it into the car, I then decided to walk around the area and walk to the river to gather some photos. It was a pleasant afternoon with some nice sunshine and not too cold. I found some interesting river shots but nothing overly outstanding. I slowly made my way back to the car and packed away the camera. The drive home was without incident and I made good time. Overall, it was a good outing and the location quite decent for radio. Being near the Pitt Meadows airport did increase the noise from overhead planes but with headphones it wasn’t too bad.