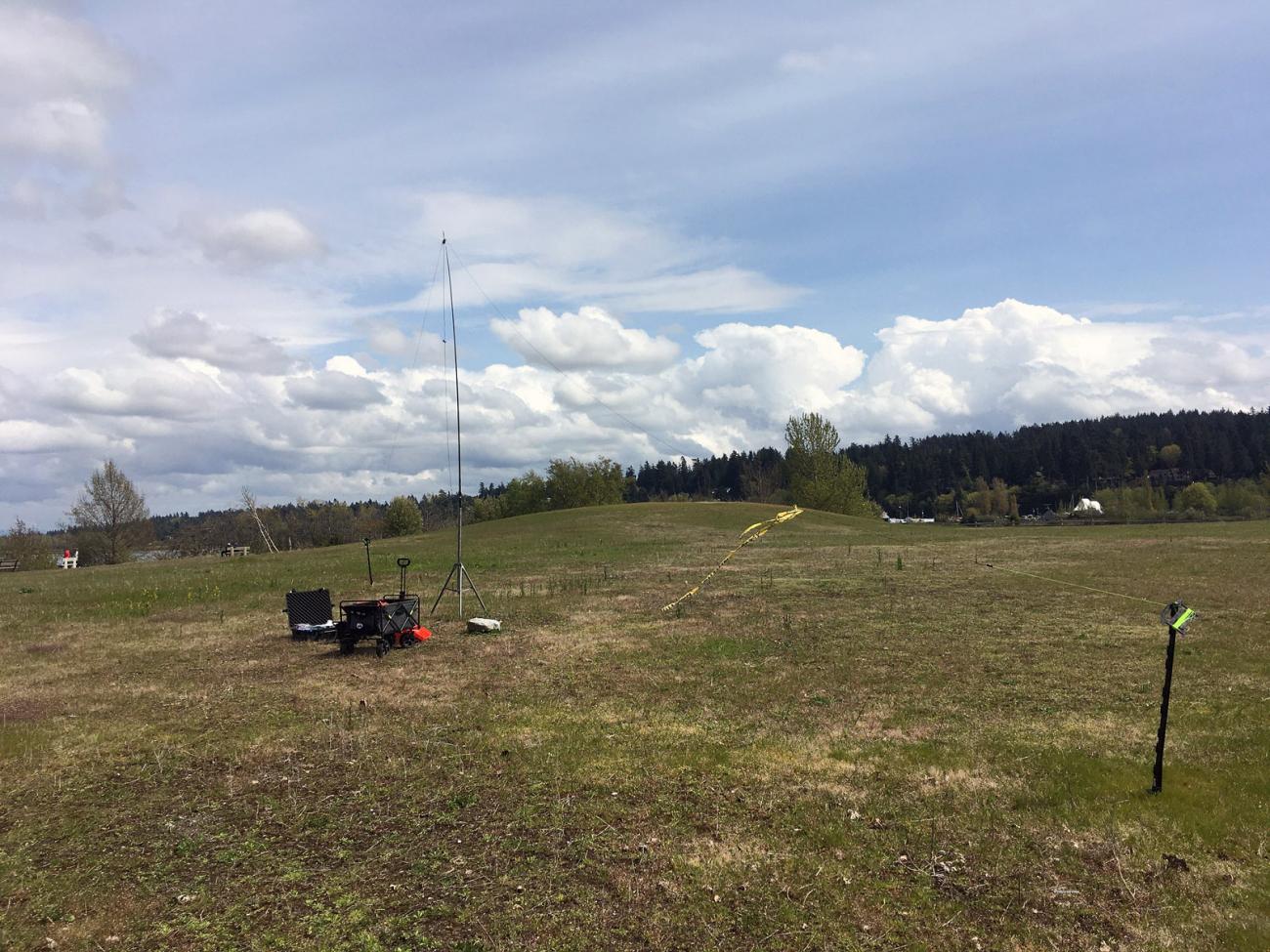 Blackie Spit was recently added to the Parks on the Air list and I was impatiently waiting to do my first activation there. I was waiting for a day with decent weather but also one where I hadn’t planned a visit to a more distant park. That day finally came. The morning was wet and I didn’t think I would be going anywhere. But as noon arrived the sun appeared and the day warmed up. So, I decided to head out and finally get the Spit in my log book.

Going to Crescent Beach on a week-end is no longer a pleasant visit. The traffic from visitors is high and parking can be fully consumed by late morning. They even have traffic control restricting people coming in, so I avoid the area on week-ends. On a nice Monday, the numbers are low and one can find parking. In fact, as I sought a spot to park today, I was able to get the one closest to the path I wanted to walk! – so nice.

I arrived around 1pm and loaded my cart so I could walk it to the central grassy rise area. There I picked a nice spot west of the rise and settled in. There were no benches here but my portable chair works fine even though it does give me a bit of a back strain if I stay too long. Once selected, I stretched out the antenna wires and was soon on the air on 15m. Then band was quiet and I had no issues picking a frequency. I put out a few calls and soon had a response. I then spotted myself and waited for some activity. And waited and waited … no one came, so I switched to 20m.

On 20m the band had more activity and I had to search around for an open frequency. Once found I went to spot myself and discovered that my 15m spot had not actually been sent. Well that explains the lack of activity but I was now settled on 20m so I didn’t try 15m again. Now I was starting to get some activity. And before long I had more than enough contacts in the log. Nothing overly exciting contact wise, a number of regulars and a few stations from South Dakota which was less common. By the 30-minute point the contacts had slowed and I had to re-spot myself or stop. As I had 18 in the log which was more than I needed, I opted to pack up. I will likely be back many times as it is a nice spot and close to home. First, I need to get through the list of parks to maximize my unique park count and earn the various awards.

As I packed up, I noticed that the weather was getting cloudier and the conditions were not quite as pleasant. I could see some shower activity moving this way, so it was indeed time to end for the day. A pleasant quick visit. Unfortunately, I had forgotten my good camera and had only the phone to gather a few photos. But I have lots of photos of the Spit so I really only needed one of my station, and that one I almost forgot to take!