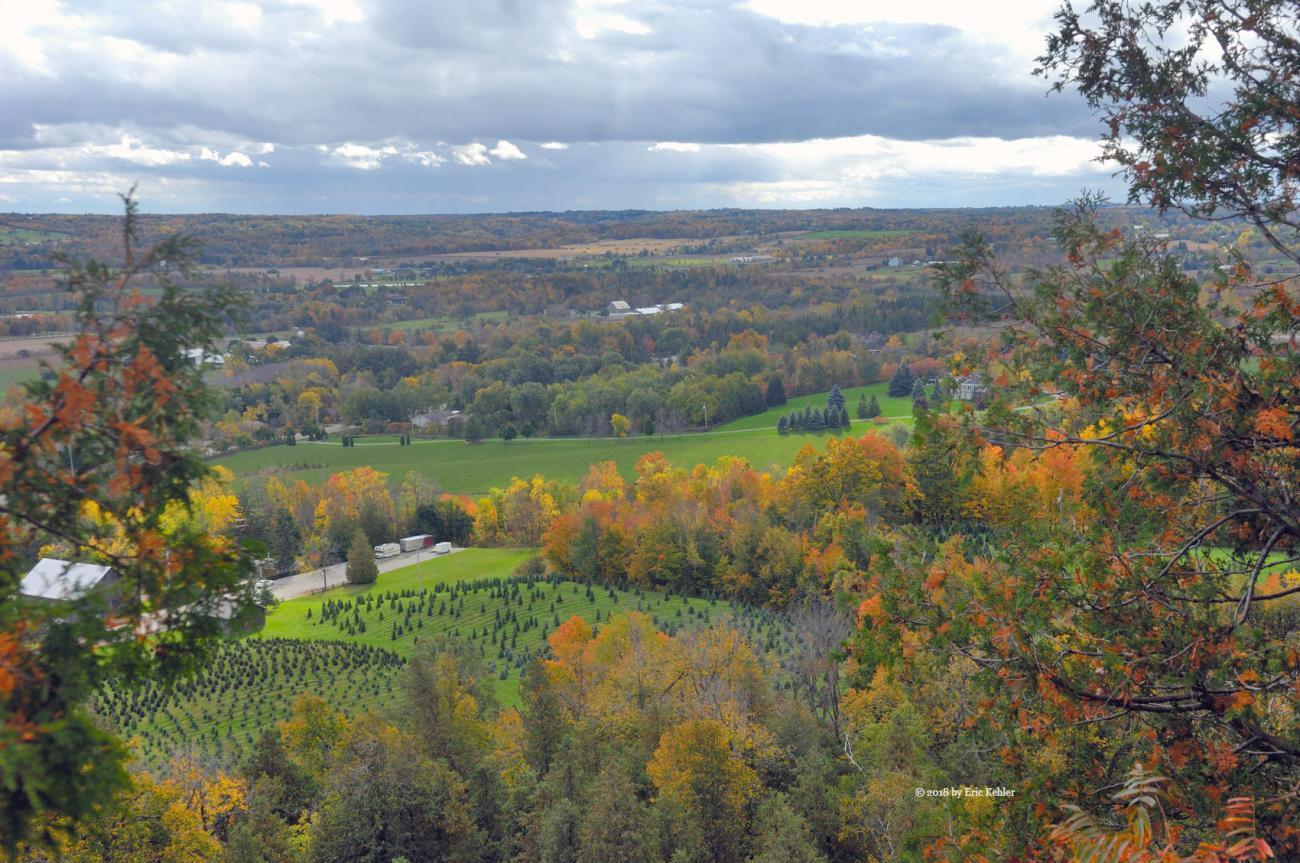 After what to me was an early start, Carolyn and I made our way to the restaurant for breakfast, we had a pleasant meal, and then back in the room I got my gear ready to set out with Mike. It was 10:15 when we left for the hills. Our first stop was to be an electronics store to buy a 12 volt connector for my ham radio as I forgot to bring one. Mike suggested the Source so we drove to Burlington and parked at the major mall to visit the store. They were no longer stocking that sort of item but had some clearance items. Mike spotted something that would work and after a quick purchase and some adjustments to the item it was ready to use. It actually worked out quite well.

Done with the shopping, we started north along Appleby Line. We came by Bronte Creek where we sought out some access to the creek and tried a few roads but all seemed to be private with no access to the public. We then spotted Rattlesnake Point Conservation area on the map and decided to head there. It was a short drive and we soon arrived, paid our entrance fee and made our way to the lower parking area. From there we wandered over to the first viewpoint and started gathering some photos. The sun was peeking out from the clouds on and off so we had some time as we waited for the best light. The colours were quite lovely in this area and it was well worth the few dollars to be here. We walked along the cliff edge to each viewpoint in turn, gathering more photos at each stop.

At the one furthest to the north-west we stopped to reflect on all the rock climbing hooks secured to the rocks. They were all along the cliff, every few feet! Several hundred in fact. Well we were here for the colour not to reminisce about a lost youth where we could have been rock climbing. We circled back taking the more secluded trail a bit back from the cliff edge. It was a pretty walk in its own right. We then continued past where we were parked to the south-eastern most view point. Here we encountered a stairway down to the base of the cliff and we decided to head down to gather a few photos looking up the cliff face. It was a fun spot and we found the ledge where people were sitting half way up the cliff when we last gathered distant photos of the cliffs two years ago.

It was now starting to get cool so we headed back to the car and then to find a place for lunch. We settled on a Thai place and used google to lead us there. Soon we were walking in to a deserted restaurant, it being between the prime lunch and dinner hours. We ordered some food which when it came was very good and we both quite enjoyed our meals. We stayed to chat for quite a while afterwards, I had already missed my scheduled radio chat with Ralph so it was no longer a priority to get going.

Once we did leave we slowly made our way back to Grimsby but stopped at a few spots along the way, most notably was a spring with an interesting history in the area, and a cemetery. The oldest stone we found dated back to 1837 and the number of Eaton stores was quite a surprise. We continued to slowly make our way home but the clouds had thickened and the colours no longer caught our eye. It now being Friday rush hour we decided to travel the side roads home and miss the stalled traffic on the highways. It was a fun outing and we successfully gathered some nice fall colour shots.