A walk with a rattlesnake
Category
Ontario Adventures
2019 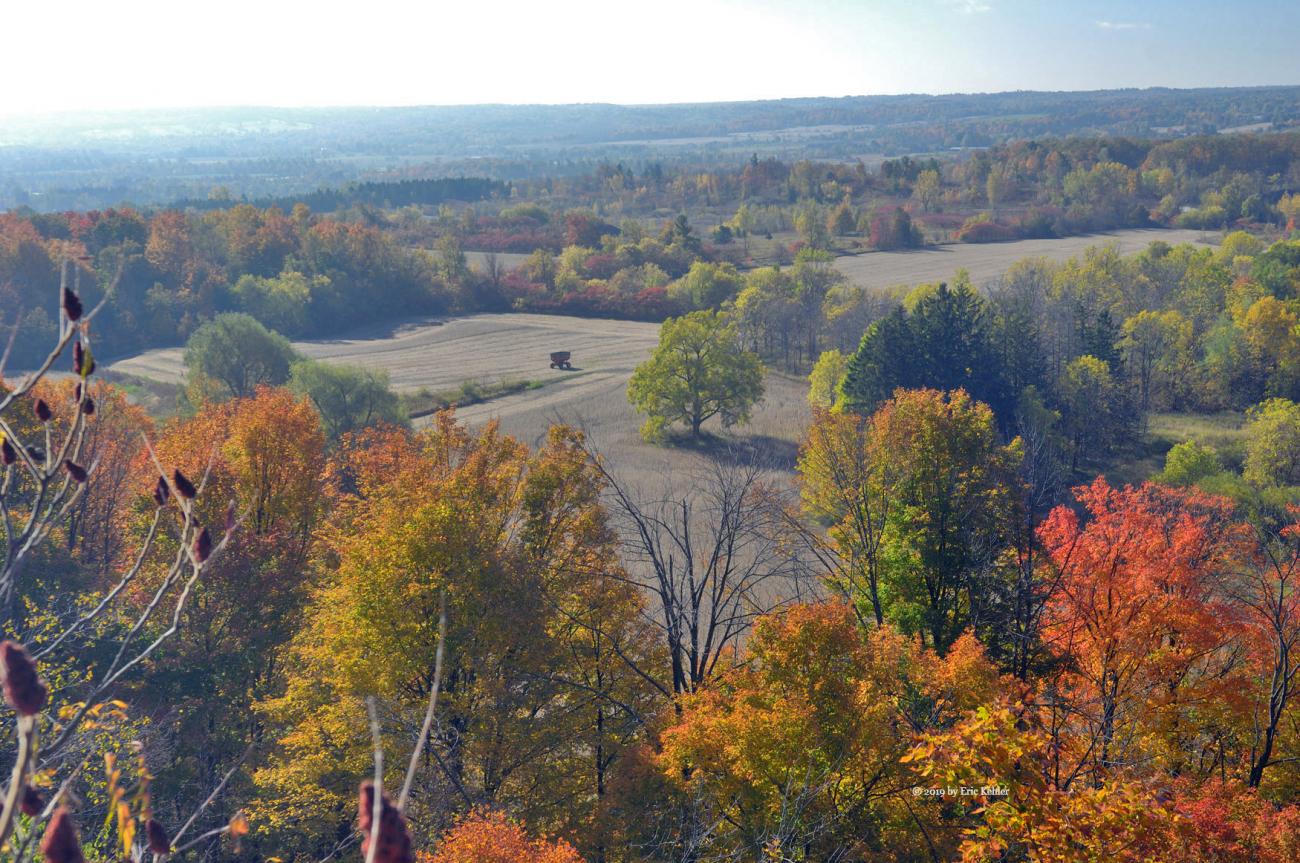 Mike came by a bit earlier today and we started our adventure thinking of a spot to visit. We thought we would do the waterfall area later and so a new place of interest was needed. Last year we quite liked the bluff edge at Rattlesnake point so we decided to head for there and see what colour we could find. We made fast time along the highway and then along Appleby road to the escarpment. The road up to the top was quite narrow and twisty but we were soon up and looking for the entrance to the conservation area. We turned in and found a couple cars in front waiting to pay their entrance fee. After a brief wait we got through and started for the lower parking area.

The lower area was full of cars, it was a popular spot this morning. We finally found an open spot near the restrooms and there we parked and got our selves ready. We made our way through the parking to the short trail leading to the cliff edge. At the edge Mike stopped to take a phone call and I realized I had once again forgotten my polarizing filter. I dropped my gear with Mike and zipped back to the car to get it. I also dropped off my outer jacket as it was already getting warm. Back to Mike and I gathered my first photos while he finished his call. Then we slowly wandered along the trail as it skirted the cliff edge. We were walking in the westerly direction and found a number of lovely spots to gather a few photos. After a slow walk with many stops, we finally reached the far end of the main area and there we gathered some final images along this way. I stopped to chat with a rock climber who had just deployed a rope over the cliff. Once Mike had completed his collecting of photos, we took the trail further from the edge for our return. We walked quickly back to our starting point, the trail through the trees was very pretty in its own right and we did gather a few more photos.

Next we walked the eastern direction to the Trafalgar Point area. By now the numbers of people had increased, I guess this direction is more popular. We didn’t find as many viewpoints this way but even at the ones we did the colours were now more muted as the sun was directly above us. When we reached the view area we stopped to gather pictures and then we climbed down the stairs to where we could climb out onto a ledge on the cliff. I opted to not climb up as my dislocated shoulder would not appreciate the strain yet. I did get a couple pictures of Mike up on the ledge. Then I dropped down to the base of the vertical a section where a trail made its way along the bottom. Here there were numerous groups of rock climbers organizing their climbs.

The first climbers we came by were a young couple. The chap made his way up first pulling the rope and setting some clips securing his rope. Once at the top he dropped down and his partner started her way up. It looked like a lot of fun and not overly difficult. But the closest I got to climbing was with chatting with them. My shoulder certainly wouldn’t want any part of that.

After watching the climbers a while, we returned to the top and wandered to the next viewpoint and then returned along the trail. The place is certainly popular.  There was a chap offering rock climbing experiences for thirty dollars that looked inviting. Once back to the car we pulled out noticing that there were a few more open parking spots than when we arrived.  We followed the road to the top lot and exit. This lot was packed full of cars and there was a backlog of 15 cars waiting to pay to get in. More arrived as we drove out!

Being past lunch, we decided to head for the small restaurant in Lowville that we enjoyed last year. It was once again a very enjoyable meal. After lunch I was feeling quite tired, my earlier than normal start had caught up to me and I wasn’t up to more adventure. So, we drove back to Burlington and there we did stop for a break visit to the beach on the far western shore of Lake Ontario. The wind was very refreshing. A short drive further and I was back at the hotel where I could get a brief snooze before heading out for dinner. A lovely visit with lots of brilliant colours. The waterfall will have to wait for my next visit.