Our earlier trip last month saw us buried in cloud, so today I was looking forward to the amazing views we missed 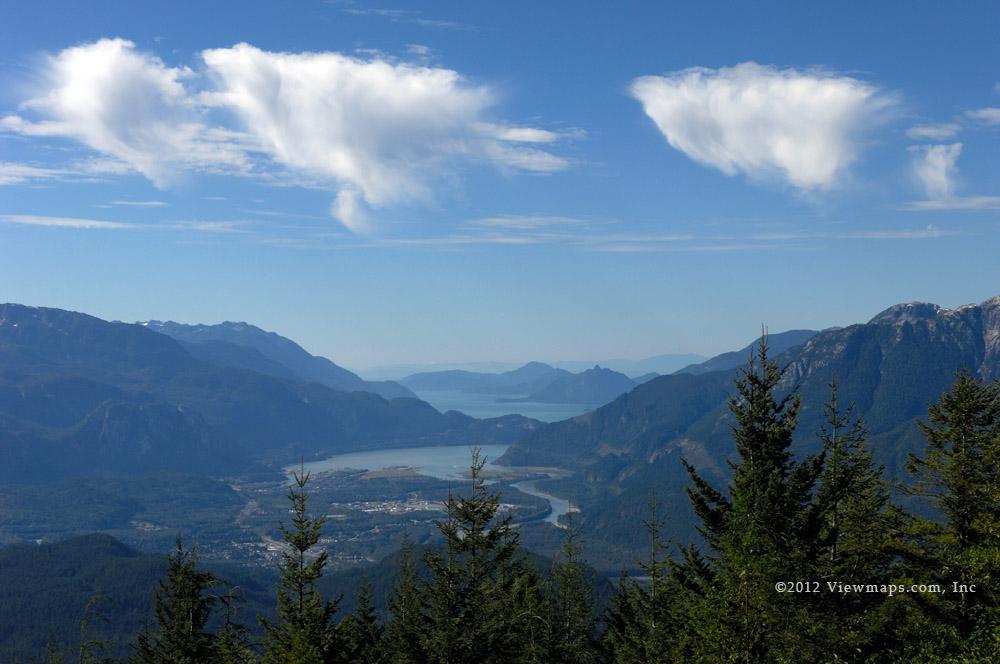 It was only a few weeks ago that we drove up to the ridge with the hope of seeing the sights. Unfortunately on that trip the clouds were blowing through and we didn’t see any views of the valley below. We also didn’t get to the end of the road due to snow blocking our way. So this being a week without a hike planned we decided to give the ridge a second attempt. Our day began a bit earlier than our regular departure but not as early as the outrageous time we go hiking. We grabbed a few items in Cloverdale and then made for the highway and our destination – Squamish.

After arriving in Squamish we filled up the truck and I called John a local Ham radio friend. He answered back that he was heading up a ridge just a bit past where we were going so we agreed to listen for any calls from each other. Fueled up, we quickly reached the start of the FSR and made our way along the Cheekye Creek FSR. It really is a miserably rough road and the heavy traffic it gets just makes it worse. As we gained some serious elevation we started to enjoy the views of the valley and Howe Sound that we missed last trip. The view along the Sound is truly remarkable and I really enjoyed the look of the three major islands stacked up in a neat row.

Geoff stopped at the small wooden platform I discovered with Ethan last trip. He immediately saw it as a mountain bike jump and pointed out the landing ramp which we didn’t notice in the over-growth last time. We continued up to ever better views and soon came by an old concrete structure that caught our eye and so we had to stop and check it out to see if we could figure out what it might have been in its better days. After some time and looking it over from all angles we still couldn’t decide what it was and so we continued on our drive up the road.

We quickly reached the point of the upper gate and the snow level that stopped us last trip. Well this time the snow was gone but the gate was locked! Now this was very annoying and we were not at all impressed. After a few minutes of anger and gathering a few photos we backed up the short drop in the road to where two other pickups were parked and we then drove a side road to a boggy area where there was one more pickup. They were all empty and we wondered where the occupants were off exploring. The alpine bog was quite interesting but we were soon back on our way to the main road with plans to continue our drive.

Driving back down the initial section of the road exposed even nicer views of the valley and Sound below and we stopped a number of times to gather up more photos. Rather than head back down we elected to take the cross-over route to the Brohm FSR and there we explored the area Ethan and I started out on last time. We could see better views and the bugs were a bit less intense. We drove up two side spurs to get close looks at two small lookouts that had been built. I would say that at one time they likely had a good view of the valley far below but today the view is quite limited and consequently the structures are falling into disrepair. The road to the second lookout was quite long and narrow and we had trouble trying to turn around. After a vigorous attempt at the start we gave up and backed out half the distance before we could find a wide enough spot to turn around. We then continued up the remaining short distance and once at the far end of the road we stopped to eat lunch. It was a decent spot with a fair view and the bugs weren’t too bad – at least not at first.

Once done lunch we back tracked down the Brohm FSR past the point we entered it earlier and on down. This road was much smoother than the Cheekye on our way up. We found a few spots to stop and gather photos but all too soon we found ourselves back down to the bottom and on our way out to the highway. We decided to continue on up the highway to the next FSR – the Swift Creek FSR.

As we drove north along the Sea-to-Sky highway we zipped right past our intended exit point. So we had to find a place to turn around and try again. The start of the road is in a viewpoint and where the road continues there are a couple of signs indicating that a private chalet was up the road. After thinking it over , I determined that this was the actual FSR and we would give it a go. We could always turn around if the FSR no longer was usable. Fortunately the road continues right through the middle of the chalet and we were soon on less traveled road heading up and into the hills. The road went for a ways and then veered off the trail marked on the map for a fresher logged area. We decided to drive through the freshly denuded area and see what we could. We tried a steep spur but it was so steep and had a cross ditch placed just right to give us a challenge. We spun out on two attempts to cross the ditch while sliding towards the edge and so we gave up on it. We soon saw that the spur went only a short distance further so we didn’t miss much. We likely could have made it if we had switched to 4x4 low like we did a bit later on the other fork. Eventually we came by a few nice northern views and the end of the road. Here we stopped to gather photos and Geoff set up his target sheet for some shooting practice.

Done with the location we returned back down and once on the highway we continued north to the next road – Culliton creek. Unfortunately this was gated just in from the start and as it was getting on in time we decided to call the day and start heading home. Our drive went very smoothly but not so for those heading north along the highway. There were three areas where the cars were backed up, the final one lasted many kilometers in length and likely would take an hour + to get through! We sure were glad our direction was light with traffic and no slow-downs anywhere. We did stop in West Vancouver to pick up some drinks for our final segment home.

So despite the ridge being gated off we still got some great views from the lower portion of the ridge and we felt we had a decent trip into the area.