The weather had improved over the last two weeks so we thought we would give the Squamish FSR another try and see if we could reach the Elaho River which eluded us last time. 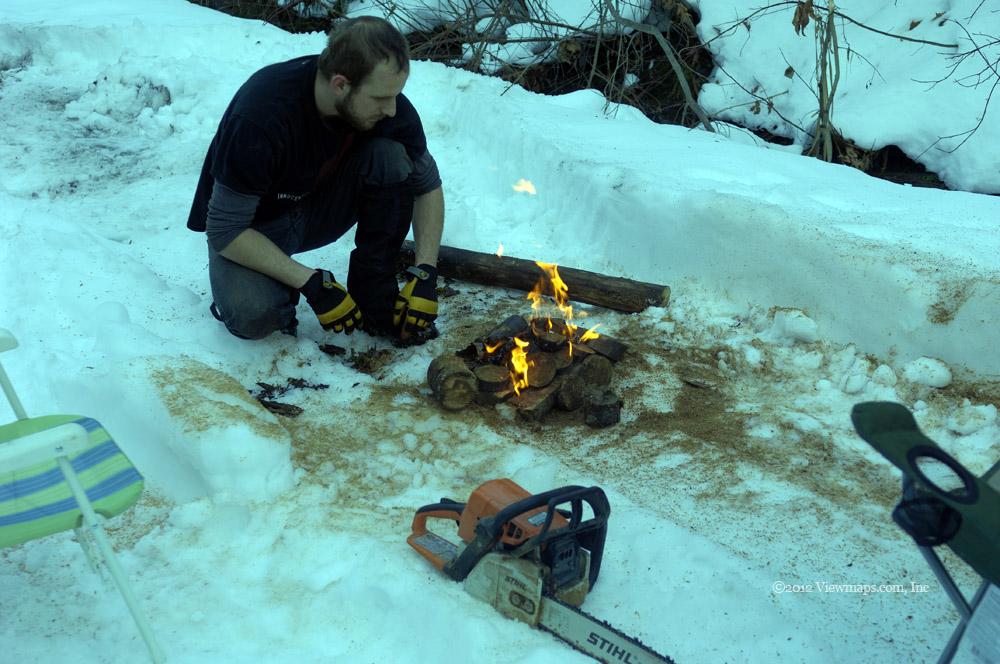 The Squamish River area is a lovely scenic spot in which to enjoy the back country. It is easy to reach and being a long slowly climbing valley, it provides easier winter access than most areas. Two weeks ago we drove the valley in fresh snow and made our way quite some distance through the virgin snow but we didn’t get to the confluence of the Elaho River. So after two weeks of better weather we felt that we would give it another try, hopefully the snow depth will have dropped due to the sunshine.

Our day began well and we made our way to the highway, our first treat was of the Fraser River which was covered by a low layer of fog. Crossing over the river on the Port Mann Bridge brought us above the fog and presented some lovely views of the fog below. It was quite amazing and I took a few photos as we sped across the bridge. The balance of the drive to Squamish and the start of the FSR went without incident and we were soon at the logging road.

The initial road was well travelled with two deep ruts reaching to the gravel. It looked easy enough that we decided to drive it without putting on our tire chains. As we made our way in we saw a few other vehicles but the traffic was very light and we had the place to ourselves. After driving a fair way along - past the dam and a number of the side branches, we came by a car angled off the road (ruts). As we passed the car the driver flagged us down and begged us for help. He was stuck and hadn’t been able to get out for over an hour. The situation didn’t look too hard so we moved the truck to a side location and started pulling out the winch cable. As our angle was wrong we decided to use the snatch block and pull him directly back to the centre of the road. We soon had him back in the ruts and able to move once again. Looking at his car we noticed that he didn’t even have snow tires! Not really a good set up for the road conditions as he learned.

Once done with the recovery, Geoff pulled out his newly acquired semi-automatic assault rifle and fired off a few rounds. It worked really well and he was able to squeeze off five shots in a couple of seconds. Needless to say he was quite impressed. Meanwhile I took a few moments to do some of my own shooting of the scenery. Once done with the location we continued up the road and came to a waterfall that I shot last time. I spent some more time taking additional images of the water. The ice was now gone so it had quite a different look from the first came we stopped to shoot it. Continuing past the waterfall the snow depth was slowly increasing and the ruts no longer always exposed the gravel road bed. Soon they were just deep ruts in a thick layer of hard snow.

By the time we reached our furthest point from two weeks ago the road was getting a bit harder to travel so we stopped at a straight stretch and there we put on the tire chains. That gave us good traction and we continued up the road. Soon we came by the B800 branch where it seems a majority of the vehicles making the ruts had stopped for a big campfire and possibly even a camp. Beyond this point the ruts continued but they were not as well defined. Our going started to be a bit labored and we were struggling for traction on some of the slopes but it was not too serious so we continued up the road. At one point we came by a section of road that butted up on the river edge. Here the road made a rapid drop to river level and it was here that we noticed one rut where the driver drove right over the missing gravel road bed. It would seem that the one tire would have been suspended in midair as the vehicle moved forward – a bit too close for my comfort.

Not much beyond the spot of three-wheel driving the road moved away from the river and started to gain elevation a bit faster, here was where we started to slip and soon ended up with the tires out of the ruts. Now our chains worked great in churning up gravel and digging a hole for the tires but the snow was hard enough that it just bottomed us out even more. So it was winch time for us! We set up the winch to pull us across the road back into the ruts. This took a few minutes and soon we were moving north again, slowly towards the Elaho. Only a 150meters further down we again slipped out of the ruts and ended up bottomed out. We again pulled out with the winching equipment and got ourselves back in the groove!

By now we realized that the ruts were no longer able to keep us in them and that we would not be able to make much distance before getting stuck again. So we decided that this was our end point for the day. We noticed that the ruts only went a 100 metres further themselves. So even they called it at this point. We noticed that the spot we were at was where the previous drivers had turned around so we opted to do the same. Being in a longer truck, we had to turn very carefully lest we get stuck so Geoff made a 20+ point turn as he slowly rotated the truck around. He managed it without a problem.

Once turned, we decided to set up camp for a bit of lunch and rest. Geoff also set up a target for some rifle practice. It was a decent place to eat lunch, the burners heated up the water in quick order and soon we were enjoying a hot meal and some tea. Once done with food Geoff took some shots with each of his rifles while I spotted his accuracy with my binoculars. He did quite well, getting pretty close to the centre of the target with all of his guns. By now the sun had dropped below the western ridge and the temp started to drop, so we packed up and started on our way home.

The drive back along the FSR actually went quite smoothly, we found it much easier than heading out. I guess we worked up the groove enough that it was now more easily driven. We did stop at a few places so I could gather some photos and Geoff did some shooting at one spot. Soon we were at the start of the road and there we checked over the truck and noticed nothing out of place. It looks like this time we actually didn’t break anything! Once back to Squamish we stopped to buy a coffee with our free drink coupons. Then it was up the sea-to-sky highway for the drive home. We did have a nice sunset so we decided to pull into Porteau Cove and park so I could gather a number of sunset photos. We also stopped at Lions Bay for a few late sunset photos before continuing on to home. It was a lovely day and though we didn’t reach the Elaho we did make it 3 kilometers further up the road but still around 6 short of our goal. I guess we’ll just need to try again in March!