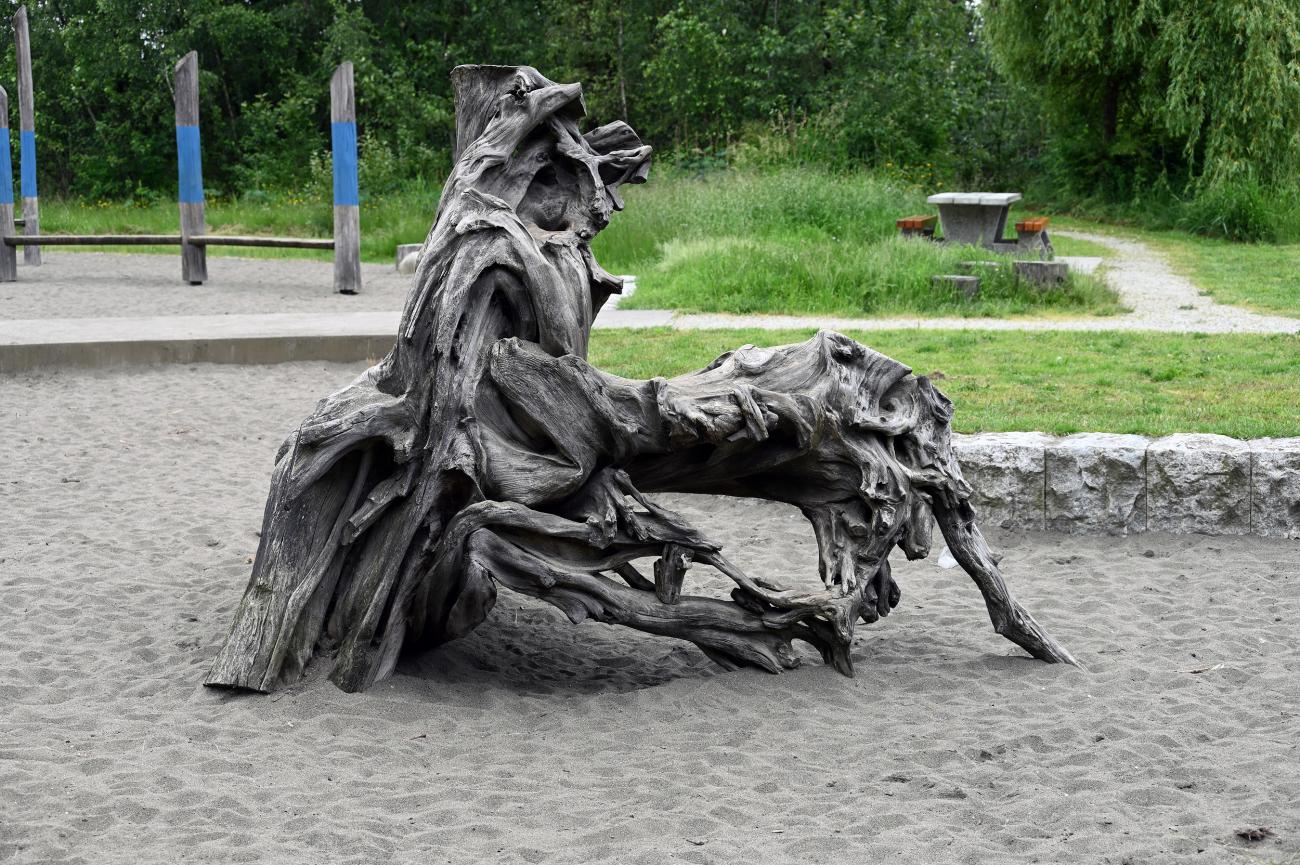 Since I have been visiting parks to operate my radio in them, I have been missing out on going just to gather some photos. So, for today I left my radio at home and made sure I had my good camera. As I was setting out, Carolyn asked to join me with Quigley. So, the three of us set out for the park.

I had hoped the trail along side the Fraser River would offer some nice river views so the Parson’s trail was my destination for the adventure. It is a loop trail with one side following the river. Upon arrival we had a quick review of the trails and set out for the river loop. The main trails are well upgraded with wide gravel walkways and we made quick time along the built-up section. There were a couple of access points to the river which I wandered into to gain some images. I noticed that the river was very high due to the snow melt. Almost up to the trail height in a few places.  We continued heading west along the trail and river enjoying a quiet outing. Not many were at the park today and no one on this trail.

I noticed a sign that said there may be some flooding on the trail but at this point it looked high and dry. We soon came by a small bridge across a creek and then continued along a less developed trail but still quite well packed and cleared. Along this section the trail tended to meander between the trees more than the wider earlier section. We entered a mature Cottonwood area and the tree trunks were massive. I had no idea that the cottonwoods could grow so big. There were a few more access points to the river but these views were quite obscured by bush and with the high water level, any beach areas were submerged.

In time we reached the end of the western leading trail, it now swung south and eventually east. Unfortunately, only a few hundred feet further we crossed a short foot bridge to be met with a flooded area. The water was only around a foot deep but far too deep for ones runners. Since we were only starting the return section and already, we faced a flood, we decided to not bother trying any further. This one may be a small obstacle to what may come next. Just beyond the water covered section another longer foot bridge could be seen so it was obvious that the next section was a flood plain and there were possibly many more problems that way. Rather than risk it, we decided to backtrack along the trail.

We took it easy as we returned, I was able to gather a few more photos but the scenes were simple vignettes along the side of the trail. When we were back to the gravel trail, we decided to follow the shorter loop trail that went around a pond. Unfortunately, the grasses were high enough that there were no views of the pond. The trail just seemed an endless path of gravel with tall brambles on either side. It was a nice walk but not the best for scenery.

As we came to the end, back at the parking lot we met a young mother with her child and dog starting out on the trail. Though we saw a few others during the walk, it was very quiet and we had the place to ourselves. Well in the end, we did get out and enjoy seeing some new sights and gather a few photos, it wasn’t however very scenic for the planned photo trip. It did feel good getting some fresh air and once back in the car we felt a need for a cool drink, so we set out for our favourite coffee shop.

The park is a pleasant place with some nice picnic areas and long trails to enjoy. It is big enough to spread out in and would make a good location for outdoor events.