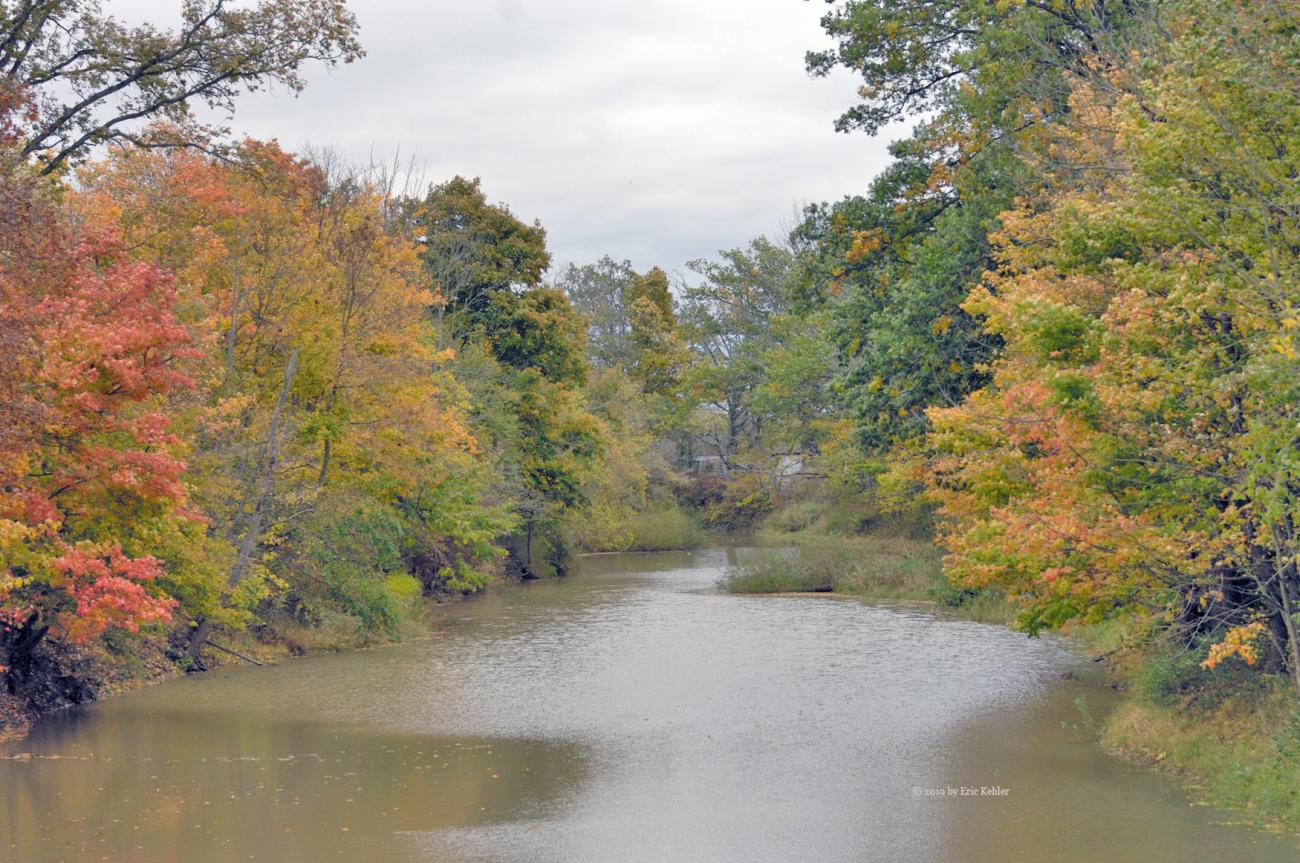 Up early for me due to the time change but just a leisurely start for the indigenous population. I enjoyed a pleasant breakfast with Carolyn and then it was back to the room to get ready to head out with cousin Mike. Mike arrived around 10:30 and after a short visit we set off to find an adventure. We had spent some time late last night getting the basic stories in sync so today was mostly business out on the road looking for colour.

We decided to head south for the day and possibly even spend a few moments on the shore of Lake Erie. So, Mike quickly loaded up with some gas and we zipped up the escarpment for the farmland behind. We slowly made our way south and had driven for some time without stopping as the colours weren’t out yet and the overcast clouds made what was, dull. We continued south and eventually came by a small bridge over the Welland River and there we finally found a bit of colour that was worth stopping for. We parked and wandered over to the bridge and captured some scenes. We had taken photos here in prior years, but it was worth another visit. Done with the river we continued south to the lake and Lowbanks. Along this final stretch we did find one more spot where we stopped to take a few photos but mostly we just talked and drove for the lake.

When we arrived at the lake, we were looking for some splashing waves but though it was windy the wind was from the north-west and not causing much wave action. So, the location didn’t work out for us. We drove further east to the Long Beach Conservation area. Unfortunately, it was closed for the season and the wind made wandering the open area less than inviting. Mike suggested we try for Rock Point Provincial Park and so we turned around and drove for the park.

The park was also closed for the season, but a public road made its way along the east side of the park heading for the lake. It looked promising as we drove it to the end where we parked. After looking about and wondering about the parking spots labeled with shooting site numbers we wandered along the trail into the park and slowly made our way on to the far end. We met a chap coming out and he encouraged us to find a platform that offered some nice views of the lake. We continued in and followed the road east to where it approached the beach. There, we found a short trail to the water where we found some lovely scenes to photograph. The shells on the beach were amazingly deep and soft. There were a few trees in vivid colour and the various textures of shells, sand and rock along the beach made for some very pretty spots to capture. Once we had our fill of this area which was labeled with ‘site 4’  we followed a stairway back to a trail that followed the coast and starting looking for the platform. We soon found it and were enjoying what remained of the view from its top. It looks like it would be a very pretty view, but they really need to cut some tree tops.

We continued along the trail and found another trail down to the water; this site wasn’t as pretty as the first and was less protected, so the wind based us off the beach family quickly it was shooting site 1. We were getting hungry by now as it was well past noon, so we decided to return to the car and head to Dunnville for lunch. We found a nice fish and chip place; the meal was quite good, and the fish cooked very nicely. While eating we had a pleasant chat with the owner and then a local homeless chap who came in as we were finishing our food.

Done with lunch we decided it was time to head for home so we could get ready for dinner. The drive back went quickly as we didn’t find anything to stop for. I’m sure there were plenty of sights to enjoy but were had had enough for the day and were hoping that we would have some sun tomorrow. The day worked out fairly well even though the clouds made it quite dull.