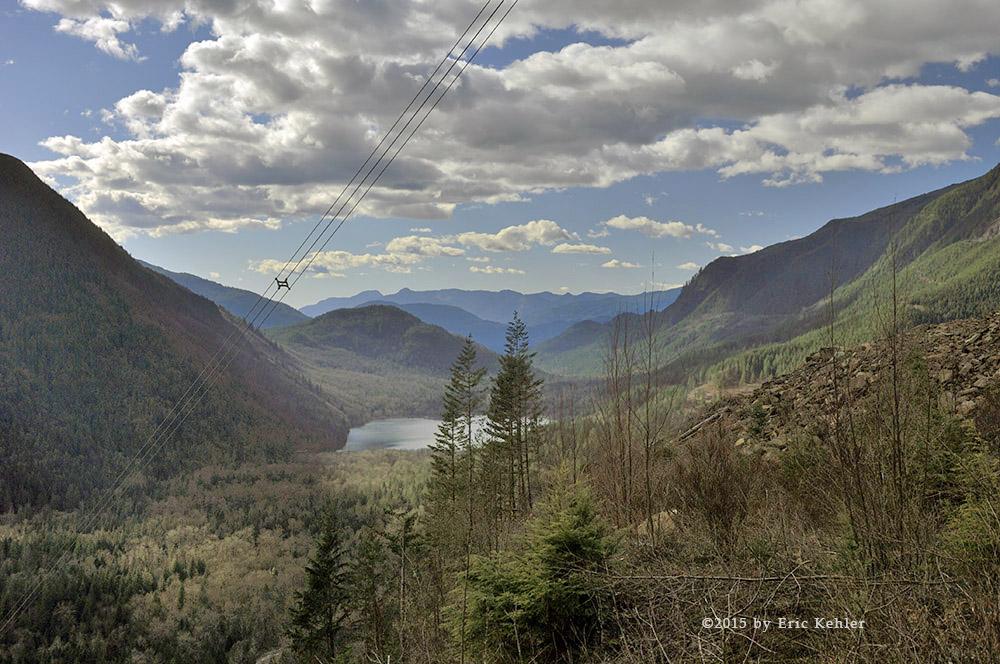 It had been 4 years since our last visit to the Ruby Creek area and we felt it was about time for a return. Last time out we came across a brand new bridge over Mahood Creek that went to a dead end just yards past the bridge. We knew that it would have been the start of a new road and we wanted to see how far it went and even if it connected back to the Harrison. So with that as our goal we set off for the creek and a chance to enjoy some fresh air.

After all the requisite early stops we soon were driving past Agassiz and heading east rather than the normal north to the Harrison. It being a nice sunny morning we were also very hopeful for some livelier colour in our scenes. We made quick time across Sea Bird Island as traffic was non-existent and soon we were onto the start of the Ruby Creek FSR. Just in from the start we came past a number of vehicles parked alongside the road, this seemed a bit odd as it didn’t look like a hiking area. The road was in surprising good shape so we made fast time heading in. As we drove we noticed a power line was following the road and as this was new it sparked our interest as to what it went to.

Once over the initial hill we entered the wider swampy region and here we followed the power line into a new development. It was powering a new hydro switching station that was still be built. It seemed like quite an elaborate development as there had to be a lot of fill brought in to raise the footing above the surrounding lowlands. While we were looking at the station we noticed the new transmission line that was being built. We even saw a pair of workers high up a tower adding on the cross supports.  We continued our drive up to a low rise where there is an old tower and where there is a view of Deer Lake and the surrounding valley. Here we saw the various partially finished towers heading up a steep cliff to our south. There were workers all around us working on various aspects of the towers.  We soon realized that this was the continuation of the new line we came across last summer in the Uztilius! It does take some time to build it!

Once we were done gawking at the new power line – I guess it is coming for all the expected electric cars – we set off for the bridge. It took only a few minutes to get to it and sure enough the road continued on past. We crossed the bridge over Mahood Creek and up the steep slope, it had some serious cross ditches and they were bottoming us out as we made our way across. But the truck is solid as are our bumpers, so we just carefully picked our way. Soon we were beside Deer Lake and enjoying a nice view of it below us. The road was in good shape except for the ditches and we were soon past the lake but here we were stopped by a fallen tree. It took only a few minutes to clear it and get us moving again. Not much further we were stopped by a washout. This was disappointing as the road looked quite good on the far side. I guess we will need to try it from the Harrison side and see how far that road comes back this way.

A bit disappointed we couldn’t continue, we turned around and retraced our route. Part way back we came by a wide pit area. There was a steep sloping bank on the one side that gave access to another more solid overlook. The whole area was seeping with water and the slope looked very soggy. Geoff wanted to give it a drive and reach the overlook. Fortunately it wasn’t too soft and we were able to inch our way up and across to the solid ground. Geoff noticed something further up the steeper slope behind where we were and he started walking it but quickly slide down as the slope was wet clay! There was enough water seeping through the clay layer to form a stream as it descended the lower slope we had driven.  It was a challenge getting up here but now it was time to get back down and I was worried we would sink in to the soft slope. It went better than I thought as Geoff was able to drive the ruts he made on the way up. Done with the pit we returned to the main Ruby FSR and continued up slope along the main line.

We soon reached the shoulder where the power lines were being built and we followed those roads out to the furthest point overlooking Ruby Creek itself. The lines continued across the creek but we were stopped with a great view up the valley. We back tracked a bit and found an old road leading down towards the creek. As we followed along a sheer rock face, I reflected on the fact that it looked quite familiar. Soon we were stopped by a number of large boulders. I checked our map and the track of a prior visit and noticed that we had indeed been here before and got stopped at the same point! Geoff decided to hike down the road to where it reached the creek and there he found an old bridge but it was too rotted out to carry any weight. Meanwhile I was gathering a few photos of the mossy rock face beside me.

Once Geoff was back we backed up and returned to the mainline where we followed the road into some freshly logged areas. The trees were still laying across the slope waiting to be collected. We got in a few more Km’s and even a bit further than last time but we were stopped by a logging equipment parked on the road. It was such a shame as the road looked like it went some ways further. I guess it will need to wait till our next visit. It was getting well past noon and we were getting quite hungry so we started looking for a nice spot for lunch. We returned to the power project and there found a nice area with a view looking down on the valley and the switching station we saw earlier.

A hot lunch is always welcome out here in the cool air especially as the wind made things quite cold when the clouds hid the sun. Done with eating, we started back up the slope to the mainline but came by a small spur leading to another viewpoint. Here we got out and hiked a 150m up a small ridge to the summit of a small hill. It gave us a lovely view of the valley and Deer Lake in the distance. As we descended to the truck I noticed another small rise next to us, it was higher and had an older transmission tower on it, so it should have a road part way up. We found the road and drove to that tower, parking on quite a steep angle! We scrambled our way past the truck onto a narrow ridge, now this ridge had a sheer drop just past us but I found a reasonable path upwards to the summit. As I approached it I looked up and realized I was only 20 feet from the 500KV power line! A bit closer that I felt comfortable being. When I jabbed by walking pole into the damp soil I even felt a small tingle from the power. I decided to back down ASAP but just then Geoff called from above me – he had found a way up the other side! So I decided to keep low and finish the walk to the summit. All was well and we enjoyed a view of the ridge we had hiked earlier. The way down that Geoff had walked was definitely harder to do that my route, but it wasn’t hugging a vertical drop or power line.

Back in the truck we backed down the steep slope and soon were on the mainline heading for the valley. It was late enough that we decided to head on out. Once back on the highway we came by a spot with a great view of the Cheam Range so we stopped and hiked up and across the train tracks to where we could get an unobstructed view of the peaks. It was well worth the effort as we both got some nice photos of Mt. Cheam. Well our adventure was done and we drove the way home without incident or much to say. It was a successful visit to the hills, we found our target bridge and just generally had a relaxing time in nature.