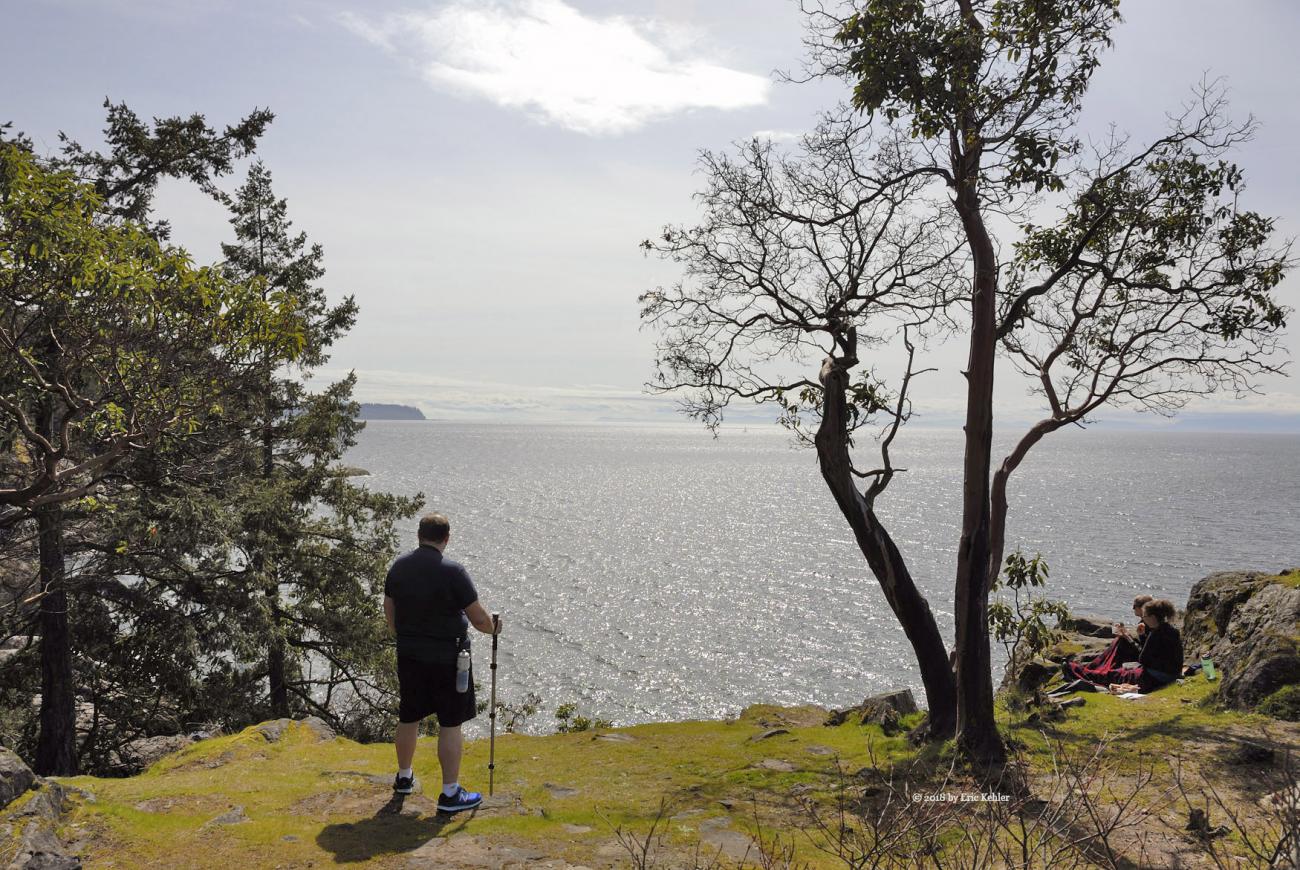 Our day began with a pleasant lunch at home and then we set out for the park. Now the day was a Friday and a stat. holiday, so I was very concerned about finding a parking spot in the park with our late arrival. But no point borrowing trouble so we drove the highways to West Vancouver and the descended the slope to Marine Drive. As we approached the park exit I noticed a number of vehicles parking along the road out here, an ominous sign! Sure enough we were in a short line of cars looking for a parking spot. As we drove in there were none to be found but as we started out a couple was walking down the road and we slowly made our way beside them, sure enough they stopped to load into their car and we patiently waited for them to pull out. So we did find a spot in the lot much to the annoyance of the cars behind us.

Once parked, we quickly got ourselves ready and we set out for Juniper Point. I hadn’t gotten there in a while and I really wanted to see how things were doing. As we made our way down the trail a few groups passed us on their way out. The rock face was just ahead and there were three small groups flaked out on the rocks in various places. Right on the top in the centre one spotted a blue doggie bag that got left behind, not the sight one wants to see on arrival. Well I was able to ignore it and gather a number of photos, the old tree growing on the cliff was still there looking much the same. I noticed that some of the arbutus trees had died which was unfortunate but the place still looked scenic. I spotted a cable structure strung across the next ravine south of us. Another visitor said it was a zip line that had just been stretched across and a few had tried it. Unfortunately no one was on it while we watched. As we started on our way back to the trails a woman with a larger brown dog came up on to the rock. The dog got ahead of its owner and spotted the doggie bag. It made for it and grabbed it. The owner was busy yelling at him to come but he was determined to eat that bag. As we left she still hadn’t stopped her dog and the bag was pretty well consumed with her cursing the person who had left it behind! A funny story for the day.

We returned to the Shore Pine trail and made our way south to Shore Pine Point. Along the way we stopped to marvel at the size of some of the Douglas firs. Some are truly amazing. At the point we stopped to rest a bit and enjoy the fresh air. I gathered a few more photos of the coastline and some sailing boats travelling past the point. We continued along the trail to the look out where we enjoyed the view and then made our way along the rocks to west beach. Here the wind was quite strong but Nick didn’t seem to mind it in his shorts and tee shirt. After a break we returned to the trail and made our way to the main area next to the lighthouse. We had been here almost two hours and we had seen the parts I was interested in and being tired out already, we decided to head back rather than continue on to Eagle point.

Once back to the parking lot we were amongst a few more cars that were leaving. There were a few open spots at this time but it was still very full. Early afternoon is the busiest time and the lot really is too small for the numbers who want to be here. But perhaps that controls the numbers enough to keep people away which leaves the place in better shape for the rest of us. It was a nice afternoon, not long but quite sufficient. Our drive home went smoothly without much traffic delay.