Although I have been in the area a lot, there are still many side roads to explore. Today we were blocked from the one we wanted but found a few new areas that gave us some great views. 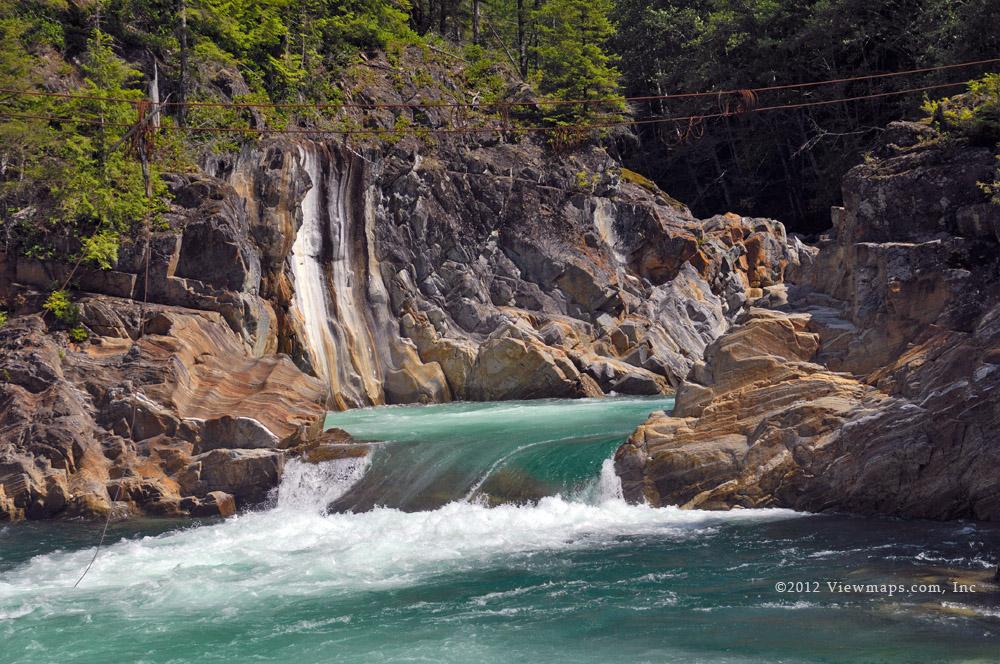 Today’s adventure was to get fairly distant and do some HF radio work back to club members at home and to see some new valleys that we haven’t tried so far. So after review of our map book we decided to head up the East Harrison and onto Shovel Creek FSR where not too far up is a further branch heading up a valley to Camchin Peak. It looked like a nice area to explore and the location looked good for a radio contact back home. So Ethan came by at the standard 8:30AM time and we left for the hills.

The drive went well; traffic seemed a bit light and was moving well. We were soon making our way through Harrison Hot Springs and onto the FSR. As we started up the FSR, we began behind a slow car that was also on its way up. Though the road was mostly clear, we did come by a large number of campers at the various campsites. The initial road is well maintained and now everyone can get up to campsite just before the Cogburn River (Bear Creek) logging yard. We drove this section quickly stopping only at the point just before Cogburn to gather a few lake photos. The Haze was out and so the photos were not as sharp as they could be.

We then made our way further north stopping next at the bridge which crosses over Silver River. This gorge view always impresses me and I keep hoping that one day I will actually be able to capture the view well enough to portray its beauty. After few shots we continued north along Silver River to the washed out crossing where Geoff was digging sand last trip. I gathered a few more photos in the bright sunlight – this section of rapids through the gorge is another amazing spot to enjoy the look of the river. I think I will need to do some video footage of this location. Done with the spot we continued on to Shovel Creek and started up that road.

Shovel creek was smoother than the upper part of the East Harrison and the bridge work was very nice but at the spot we wanted to turn south to follow up Spade Creek, we found the road completely blocked off. I doubt we could have got in there with an ATV! It was very annoying. The road was overgrown but we could have driven it for at least some distance. Frustrated with this discovery, Ethan decided he would like to do the loop run up to Nahatlatch and down through Boston Bar. So we continued along Shovel creek for a couple more kilometers and there we were faced with a washout that we didn’t feel we could cross. Another major frustration. It was too early to set up for the radio test but we were hungry and so we cooked our lunch and rested for a bit.

Done with lunch we returned to the East Harrison and continued north along it. The road was in much better shape than the last time we were here and so we felt optimistic for what was ahead. Eventually we came to a fork and chose the nicer side the other being blocked by a log. It was only later that we realized that the blocked fork was the one we were on last time and this new side didn’t exist. We continued up the newly logged area and eventually reached the end of it there we set up our HF antenna and got ready for the chat with the boys at home.

The radio chat worked well. We had a number of club members joining in and everyone but one had strong signals to me. We then tried 80m and though I could hear them, they failed to hear me on 80m. Returning to 40, I picked up a mobile chap in Calgary and talked to him for a few minutes before returning to club members. Done with the radio we packed it and started on our way back.

We made good time down the FSR and at the about the 43km we took a branch heading west up the flank of Mt. Breakenridge. This area was also new to me and looked quite extensive on the maps. The first bit of road was fairly normal but as we got higher the cross ditches became increasingly brutal. They were quite fresh and so were quite steep and deep. Ethan and I were both getting very agitated by the road. As the road continued to climb to a ridge line, I began to hope that we would get there and possibly get some good view of Harrison Lake from a whole new vantage point.

The road did reach the ridge and we did have some lovely views of the lake but we were inundated with haze and the scene was partly lost to the haze. There are many more branches along this section of road and I will need to return. The road also provides the initial road access to hikes up to the peak of Mt Breakenridge. That is a hike across glacier and may be one I try one day, though it is best done over two days.

Done with the view we started back down and over all those horrid cross ditches, we were sure glad to finally get back to the East Harrison. We next stopped at the Silver Creek log sort yard where I gathered a few lake level photos. It was a nice spot in the late sun. I noticed that the yard was down a great deal in cut logs. They have been really hauling them out of there. We left the log yard and continued on out soon we passed the now crowded campsite along the shore of Harrison. Just a bit past the campsite we came by a side road where I noticed a black bear. Ethan had driven past so we stopped and backed up to get a view of the bear. I got a few shots while he just stood there and watched us. After a few shots I yelled out hello, the bear just instantly got up turned around and headed down the embankment and out of sight, likely towards the campers.

From there we just drove the final stretch with no further stops and soon we back on pavement and heading home. Though we missed our intended location we did find a number of others to enjoy.