We have explored the north and central areas of the valley, today we tried the southern section. 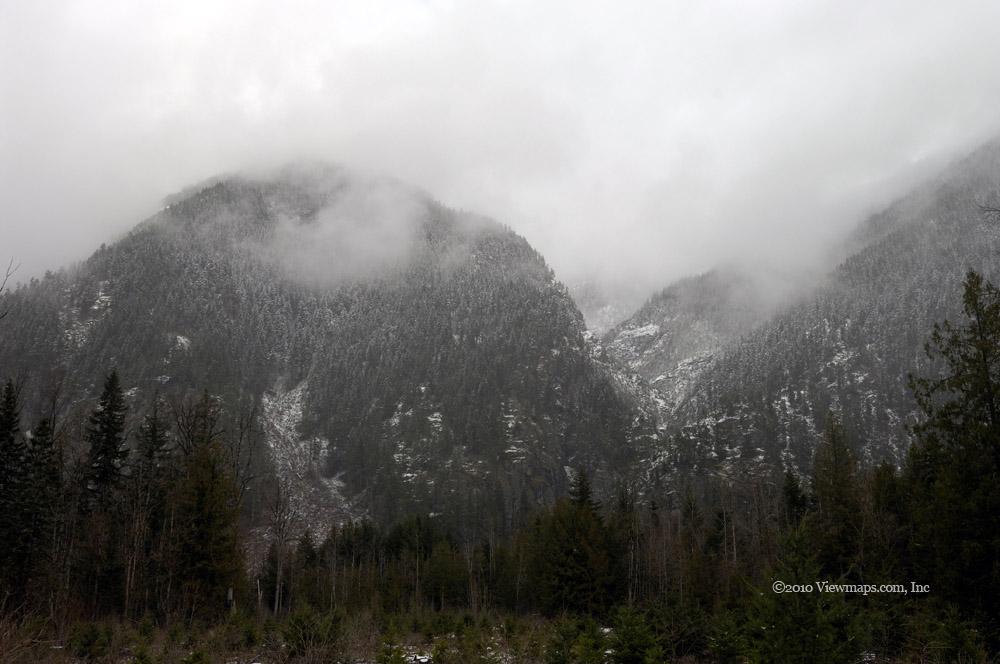 This being our third drive into the Silver Skagit valley, we zipped past the areas we have explored earlier and planned to spend the day at the south end and explore Ross lake itself. The early kilometers passed quickly and we were soon crossing the very rough pot-holed section of the Silver-Skagit road which slowed us down to a crawl as we weaved around some of the worst of the holes. This section of road is sure a contrast to the northern section which is graded and well maintained. As we made our way south the weather got progressively worse and by the time we crossed the Skagit river we were in a heavy snow! The ground was covered with an inch of newly fallen snow. Later when we stopped to chat with a few campers, they said it had fallen just this morning.

Driving this southern most section saw us travelling through a tree lined road-way. The area being a park, it seemed that the trees were much thicker, but it could also have been the enclosed feeling one gets from being in a heavy snow storm. By the furthest point south the snow had let up and though still overcast we had a drier day. As we reached the area by Ross Lake we were stopped by a locked gate. It seems that the park camping area was closed and therefore no one was welcome to even drive around the site. This is one thing I really dislike about our so called parks, they are so much more locked up and restricted than the open back country - doling out wilderness experience in small controlled quantities. So now I will need to return when the park protectors deem it time to visit.

We did check out the small foot bridge that crosses the river. I remembered it from years back when the boys had fun crossing over on it. The Skagit river itself looked quite lazy and unexciting at this point just above the lake. Though the few fallen trees we could see would make canoeing a bit if an exercise. After a bit of a walk around we started back just as another intrepid driver was arriving to be disappointed by the locked gate. As we reached the snowy section we were greeted by a heard of deer running across the road. We wcould watch them peering out at us from behind some under-growth 150 feet from the road. I guess they were surprised to find us there so early in the season.

We crossed back over the Skagit and immediately turned into an open camping area where we found three sites occupied. We stopped to chat with one of the groups- a family with late teen kids. They told us how they woke up to find themselves in a snow storm and watched it pile up as they enjoyed breakfast. But it was already melting rapidly and the snow wouldn't be around much longer. We continued north and soon were out of the park where we could drive some of the side roads to check out the region better. Though still cold and dull we did make a few stops where we could explore some of the flat wider sections of the valley. We were hoping to locate a small side road that we found years back that led to an old cabin tucked into some trees beside a stream. Though we tried a number of promising spurs we did not find it.

We continued north and were heading out when we discovered a side road just north of Silver Lake that we hadn't seen before, so we decided to give it a go and see what it would offer. It did seem to be leading to a vantage point over-looking Silver Lake but we were stopped short of a good view - perhaps another try when we have an ATV. So it wasn't the most successful of trips and we will need to retry it this summer, but still we saw a few items of interest that made it worthwhile.