This was our first trip in the region between the Fraser Canyon and the Coquihalla and we unsure what to expect in this region. 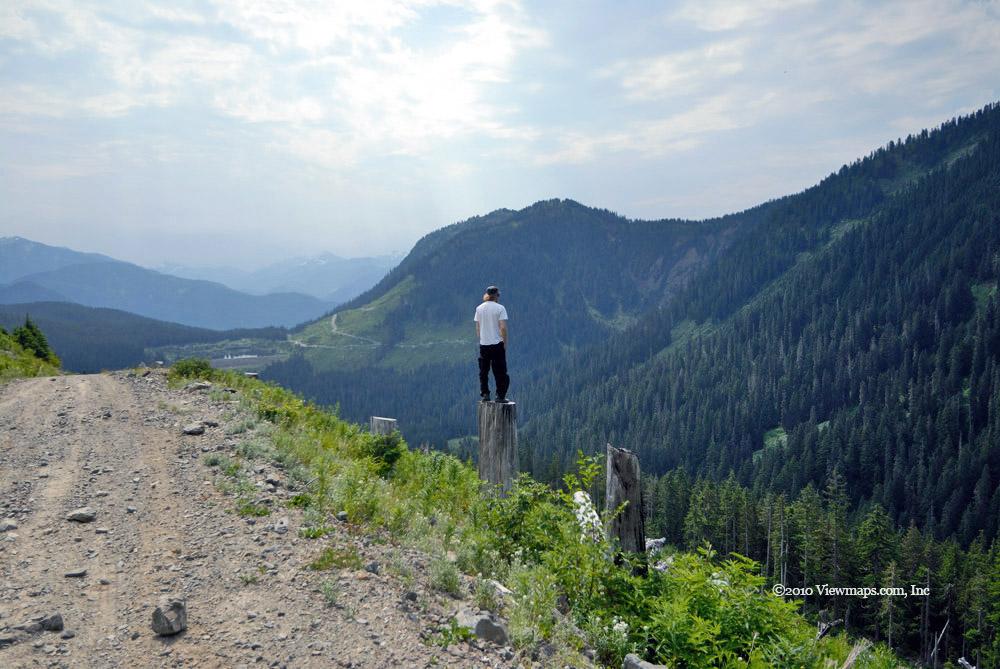 The area between the two highways has attracted my interest for some time but seemed to always elude my planning process. Well today we finally made it to the first of the roads which connect the two highways. My original goal was to enter the road from the Fraser Canyon and drive south-east to the Coquihalla but in planning the trip I discovered a few items of concern and so I decided to reverse the drive. It seems that the area at the north end of the road has had some environmental activism which may have closed off sections of the road. The south end als

was listed as gated. So which end to chance first? As the Coquihalla side had more secondary areas to explore I chose it as being the area where we would have the best chance of getting into the hills quickly.
My secondary goal was to do another HF radio test and so I was looking for some spots hidden behind a few mountains. Spider Peak in the Siwash Valley caught my attention and soon it was my prime choice for the test. It was quite southerly along the road and seemed like a good goal when we were expecting to come from the north but once I switched directions I was concerned that we would be well past it before the scheduled test time. My fears were not borne out in the end.

Our drive started with a long delay at the Hope Subway. A large group had gotten in there just ahead of us and with the slow staff; we were stuck in there for over 30 minutes. Then it was to the gas station to fill up the tank. Eventually we were on the highway again heading for the turn-off. Once we found our exit we crossed back under the highway before heading up the FSR. I wasn’t able to reach the Hope repeater until we had gained some elevation but once up a bit I was able to contact Carolyn at home to let her know we were now in the hills. I had hoped the gate would be open on the road and when I called the logging company that was responsible their staff couldn’t even figure out where Siwash Road was! It seems it had been long enough that staff turn-over had lost this bit of history.

Soon we saw the gate and noticed that it was propped open. Upon closer inspection we saw that the lock was still in place but that the gate had been nicely sliced open for us. That was very convenient and so we kept on going. Soon we arrived at the abandoned Carolin mine. The buildings showed some recent mining – they had been stripped of copper wire and were starting to decay. After exploring them we drove to one of the entrances to the mine shafts but it was partially collapsed and full of water. Scenes of the mine having played out; we now continued along the FSR passing a few more decaying relics of the mine. I was able to gather a few images of the valley as we gained some altitude but nothing was particularly screaming out to me.

Before long we came to a viewpoint looking far up the valley to the north-west. It was quite pretty and one could see sections of road far into the distance. Our new question was how to get to it. We had two forks ahead to pick through. We chose the one that looked most traveled but it seemed to be heading in the wrong direction, soon it wound around a small pond before heading up a steep slope. We followed up the slope into a short upper valley that had signs of excavation but soon the road ended and we had to turn back. Unfortunately, on the way in, we had chewed up the mud and it was now a bit slippery and we indeed did get stuck. Our winch made quick work of the situation and soon we were heading down the steep slope to the pond. There we found stacks of mine core samples which looked interesting. Then it was back to the view point where we decided to try the lower road. It soon came to a slide area where we had some boulders blocking our way.

After clearing a few of them we snaked the truck through and continued up the road. It was indeed the way up the valley but it was so over grown that we were knocking brush over as we made our way along. In many places we couldn’t even see the road from inside the cab. By now it was getting close to time to set up for the radio test and so we started looking for a bit of a clearing to work out of. The road was becoming even more impassable so we had to settle for a spot along side of the road which was clear for only a short distance. This gave Geoff an excuse to haul out the chain saw and cut down some Alder. Once he had cleared a run for the antenna we got it stretched out and up into the air.

As soon as I got the antenna connected to the radio I was able to hear the guys back home chatting amongst themselves wondering where I was. I was able to break in and we had a lovely chat between me and 4 club members. My operating location was basically where I had originally though it would be good to setup – tucked in behind Spider Peak. Once we had chatted for around 20 minutes we signed off and then packed up the radio kit. Geoff turned the truck around and we made our way back out the way we had come. It was just too over-grown to continue forward, not knowing how much more of this heavily overgrown road we would need to traverse.

Though we were disappointed at not being able to see most of the valley, we just didn’t feel that the driving was all that safe due to the poor visibility of the road. We will need to try the drive from the north end and see how far we can get coming that way. If we are close to our turnaround point then we would be able to push through otherwise we’ll need to try it in an ATV. When we returned to the mine we found a couple more entrances to the mine but these were well gated and so we didn’t get to see very far into the dark. A flash-light would have helped as well.

We next drove up a side road to a good sized man-made lake above the mine. It was likely made to hold water for the mine. We chatted with a couple who were camping on the end of the lake. After exploring a few short spurs around the lake we returned to the main FSR and set off for the Coquihalla. As we still had some time we took a side road back to Hope, it passed by the Othello tunnels area and we decided to take a quick look. Unfortunately the park which was made for the attraction was crowded and there were no parking stalls so we continued on our way to Hope and the Blue Moose Bistro where we both ordered a nice Carmel Macchiato for the drive home. Alas the return drive was to present some challenges of its own.

As we approached Chilliwack we heard the truckers talking of two fires. The first was a car fire that could be seen from the highway. It was indeed viewable with flames high into the air and much smoke. But the more problematic fire was yet to come. It seems that the highway was closed up ahead due to a grass fire alongside of the road. This backed up traffic for some distance and we spent the next hour inching our way along the highway and various back roads. So it was a very long day by the time we got home and both Geoff and I were quite tired of driving.