With a forecast of sunshine, I thought a snowshoe hike would be a pleasant outing and Mt Mercer would be a convenient location. 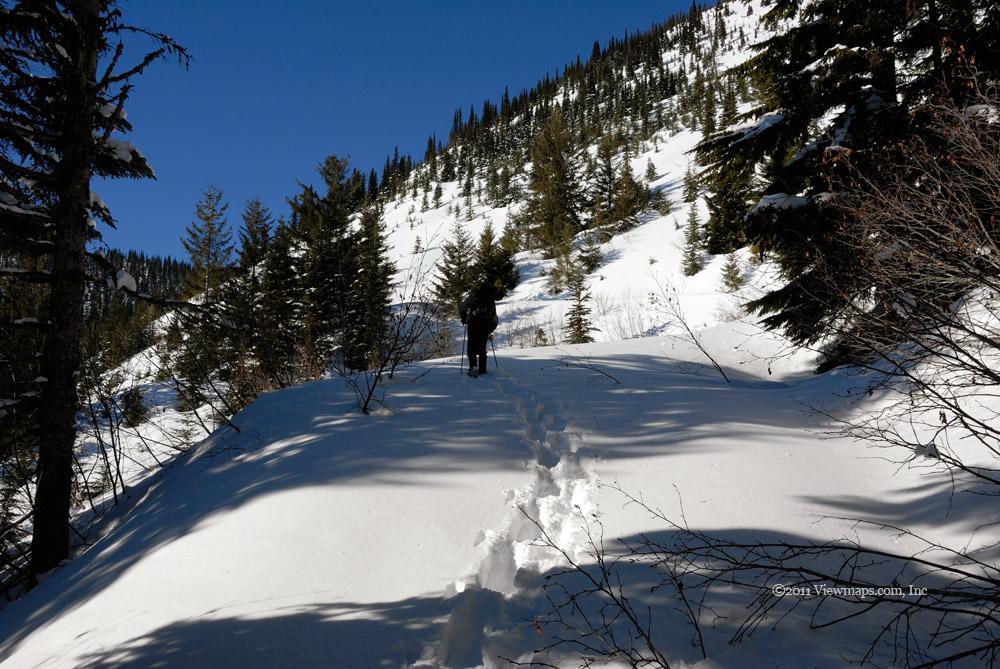 Al week the weather forecast for Saturday was for bright and sunny, and so for the entire week I was expectant of having a chance to get out and enjoy a nice hike on my snowshoes. The question in my mind was where to go. I wanted to get some elevation so one would have great alpine views. That meant I needed a south slope of a mountain as anything else would stop the truck at much too low an elevation. The Mt Thurston FSR sounded like a good choice and after checking some of the potential views on Google Earth I was very optimistic. But the snow level was unknown and if we couldn’t get above 1000 meters then the hike would be too long.

Geoff arrived shortly before 8:30AM and we got the truck ready along with our hiking gear but before we could start out I had one problem to solve. Geoff had to bring is his son over for Carolyn to watch which meant she wouldn’t be near the radio, since I really wanted her available, I had to set up the unit downstairs before we left. This took a bit of time but we were soon communicating and Geoff and I were on the road. Our first stop was the usual Fuel and Coffee in Abbotsford followed by a stop to buy sandwiches in Sardis. Then finally we were on the Chilliwack River road for the long drive up the river.

There were a lot of cars and campers parked along the river, the sun seemed to have brought out the numbers. Before long and the onset of boredom, we were off the pavement making our way along the Foley Creek road to the Chipmunk then the Chilliwack Bench and finally the Thurston! A lot of logging roads to get to the one we needed. The initial few kilometers of the road were quite good as there was new logging on the lower sections of the slope but soon we were past the active area following a road in bad shape. There were long stretches where water had eaten away at the road leaving deep trenches down the centre. It made for some scrambling as we maneuvered our way up!

Soon we were driving in snow and thought wthat we would stop to put on the chains at the next level section. Very soon however it became deep snow which stopped our way forward. Unfortunately we now had a new serious problem! When we stopped moving forward, being on a steep slope, the truck started sliding back down! This was not a good situation as the road wasn’t that wide here and the steep section went on for several hundred feet, if we picked up momentum it would be unlikely that we would be able to stay on the road. I really didn’t want to spend my day winching the truck up the slope to the road or worse, ‘wait’ for search & rescue to drag some bodies home. As we started sliding, Geoff was getting very anxious in his adrenalin enriched state but he kept a cool head and started guiding the sliding vehicle away from the road edge. We initially picked up a bit of speed but then the right front started dragging on gravel and we slowed down. In the end we had slid for around 30 feet before the front right gripped some gravel and we stopped. After a moment to recover our thoughts, we decided to put on the chains right there on the slope and not bother trying to find a level spot. They went on quite easily and we then had no problems on the slope though our confidence was a bit shaken at first. Unfortunately the snow got even deeper very quickly and we were forced to call it. Now for the critical question, had we reached the 1000 meter point which would allow for a nice hike or were we too low and would have to forego our plans? In fact we were at 1100. So the hike was on, now to find a wide spot to park the truck!

We didn’t find much of a widening but it left enough room for an ATV should one decide to venture by. In fact as we were getting our stuff ready for the hike 4 ATV’s did come by and zip past us. This was a disappointment as I had hoped to travel some virgin snow not follow in the tracks of a busy ATV route. Alas, they only got a short distance beyond the truck before they too were stopped by the deepening snow. So we would indeed get some unsullied snow to trek over.

The initial portion of the trail was not too difficult as the snow was crusty and only around 2 feet deep. But as we made our way up and into more exposed areas it got softer and much deeper. The wind had also sculpted it into deep drifts with trenches along the upslope side of the road. The hike was a constant up and down as we made our way from trench to drift. Over much of the trail we were sinking in a foot even with our snowshoes. We had a number of water crossings where small streams had cut a swath through the snow. The challenge with these was that the drop from the top of the drift to the stream bed was 2+ meters and on several occasions we almost toppled down into the water; the climb back out was no easier.

As we approached the upper regions with less trees and more exposure, the snow hid the path of the road and we could only barely make out the route. It being a bad year for avalanches, we decided that the exposure of the area was not worth the risk of continuing on. We had reached a spot with a great view of the southern peaks – Mt. Slesse to the SE, the Border Peaks and Tomyhoi due south and McGuire to the SW with Baker peeking out behind it. It was a very spectacular sight of the peaks in the winter with the wind blowing the snow off of them - was well worth the effort needed getting here.

While at the top of our hike we decided we would eat our lunch, it being after 2! While resting, Geoff wanted to build a small campfire on the snow. This had been a ‘burning desire’ of his since watching other hikers build a small fire on the peak of Hope Mountain to cook their lunch, so he gathered a few twigs and hollowed out a small area to house the fire. It didn’t take him long to get the wood burning and we now had a lovely little fire to warm our hands on. It was certainly a nice treat for my freezing fingers. Once we were done eating and soaking in the beauty we smothered the fire – not hard with all the snow around - and reloaded our packs and set off back down the slope.

The return hike was so much easier and faster than the way up. We were moving so fast at times that it was easy to trip up and fall into the snow- which I did a few times. Even with stopping for a few photos we were back to the truck in very little time. Now we could get warmed up properly. We got the gear stowed and Geoff edged the truck away from the edge of the road and into the travelled portion but it was far too narrow to turn around so we backed down the road for some distance before we could turn around – even then it was not all that wide or an easy task. Once turned, we bounded down the water eaten road and far too quickly we were back to the main bench road and then the pavement.

It was a great day with an awesome hike and many fantastic sights to remember. I do believe we picked well for the day’s adventure. Hopefully I’ll be able to get in a couple more snowshoe adventures before summer arrives.