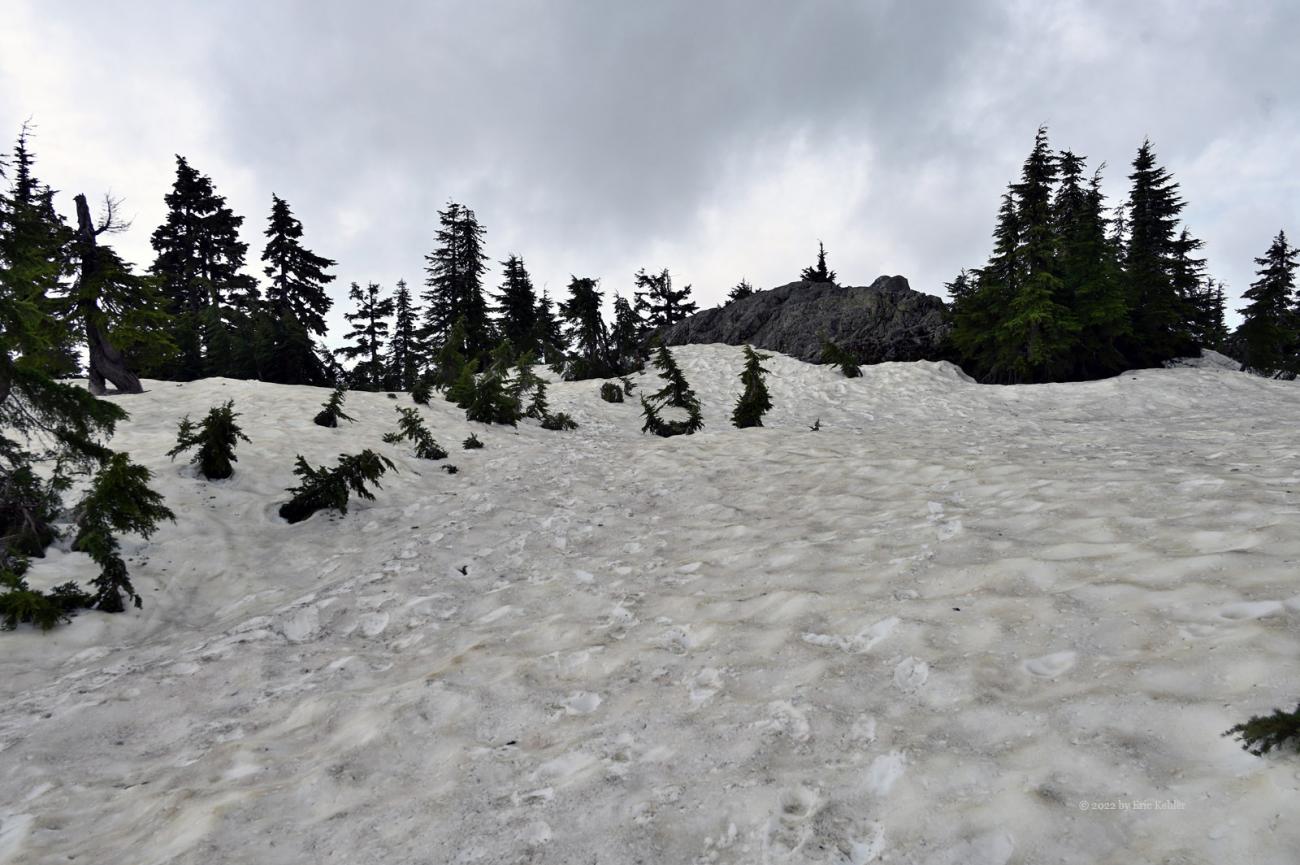 I generally try to hike each of the 4 main summits in Cypress Mountain Park once a year starting with either Black or Hollyburn. This year I started with Hollyburn so my grandson could start off with a new hike. Unfortunately, he couldn’t make it so I was on my own for the day. Normally by mid July the snow is only spotty on Hollyburn and rapidly disappearing. This year the melt has been delayed and the trail was deep enough and covered most of the slope that one could bypass the summer trail for a casual jaunt along the snow-covered ski slope.

Today would be a double activation for me. A repeat Summits on the Air activation and now a Parks on the Air activation as well. The programs are compatible but POTA requires more contacts, a minimum of 10.  On my previous dual activation, I packed HF equipment and mainly worked on the 20m band as I was concerned I wouldn’t get enough VHF contacts to qualify. On this hike I felt I would have no problem getting the minimum 10 contacts via VHF, so I packed only my standard VHF gear for the adventure.

I left the house at 9am stopping for a coffee and arrived at the parking lot at 10:10. Traffic was light and I made good time. The parking area had a few cars in it but not many so I knew there would be some on the trail but not overly crowded. After donning my gear, I set out for the powerline road and started up the slope. I made decent time to the top of the rise and was soon approaching the trailhead. No snow yet! I met a chap coming back from the hike and he let me know that the trail was good but had a lot of snow on it once one got past some if the muddy clear areas. Continuing on I saw my first patches of snow just past the warming hut. Another hiker recommended I use my micro-cleats for the day.

The trail in the trees was broken with clear areas but must of the way I was walking on snow. When I reached the shoulder where there are a number of ponds, all I could see of them was one small opening where one pond should be. They were still completely covered in snow though I wouldn’t trust walking over them lest one break through and end up in the water. The snow was still fairly hard for the most part but one did breakthrough in places. Continuing past the lake area I made good time the rest of the way to the summit. The steepest section with a bit of cliff hugging was fortunately clear of snow.

On the summit the area was completed snow covered with only the topmost portion of the rocky summit area exposed. Another couple was up there and as I was setting up my radio they became quite interested in the activity and I spent some time explaining the various adventures of amateur radio. He even asked about how one goes about getting licensed. Once set up I put out a call and immediately got a response from my buddy Ralph and then Ken. So, I was on the way to completing the activation. I heard another SOTA station calling on the frequency and tried responding but despite his signal being strong he couldn’t hear me. I did work him later as my last contact after he switched radios, it seems that his first one was deaf today. After 20 minutes of calling, I had 17 contacts in the log. More than enough for both programs. I decided it was time to stop for some lunch and then pack up. I left the radio on to see if any were looking for me. Just prior to turning off the radio I heard that other activator again and this time he did hear me, so we both got a summit-to-summit contact.

On the way down I was making great time on the trail and once past the lake area I switched to the slope and bypassed the trail. I caught up with the couple I had been talking to on the summit who had left before me. We followed the slope for a way but when we reached a snowless patch and couldn’t see the route clearly they opted to head into the trees to find the trail. I did the opposite and moved to the centre of the ski run and soon was back on the traveled trail heading down. Once past the bend I came across a few others heading up and a few returning. I encouraged one couple to follow the trail up and the slope down much as I had been advised. Not long after I arrived at the car, I saw them coming back. They had decided to cancel and try again once the snow was gone. I suggested giving it two weeks.

The last part of the trail and the walk along the service road went very quickly and I reached the car in a bit over 90 minutes. Not my best time but still was quite good and I did stop to chat with several groups along the way. The final leg of the trip – the drive home – went quite smoothly, I made good time as there were no delays along the highways for the entire trip home. I actually beat the estimated time of the car navigator! A pleasant day out in the snow with some nice conversations with those sharing the mountain with me.