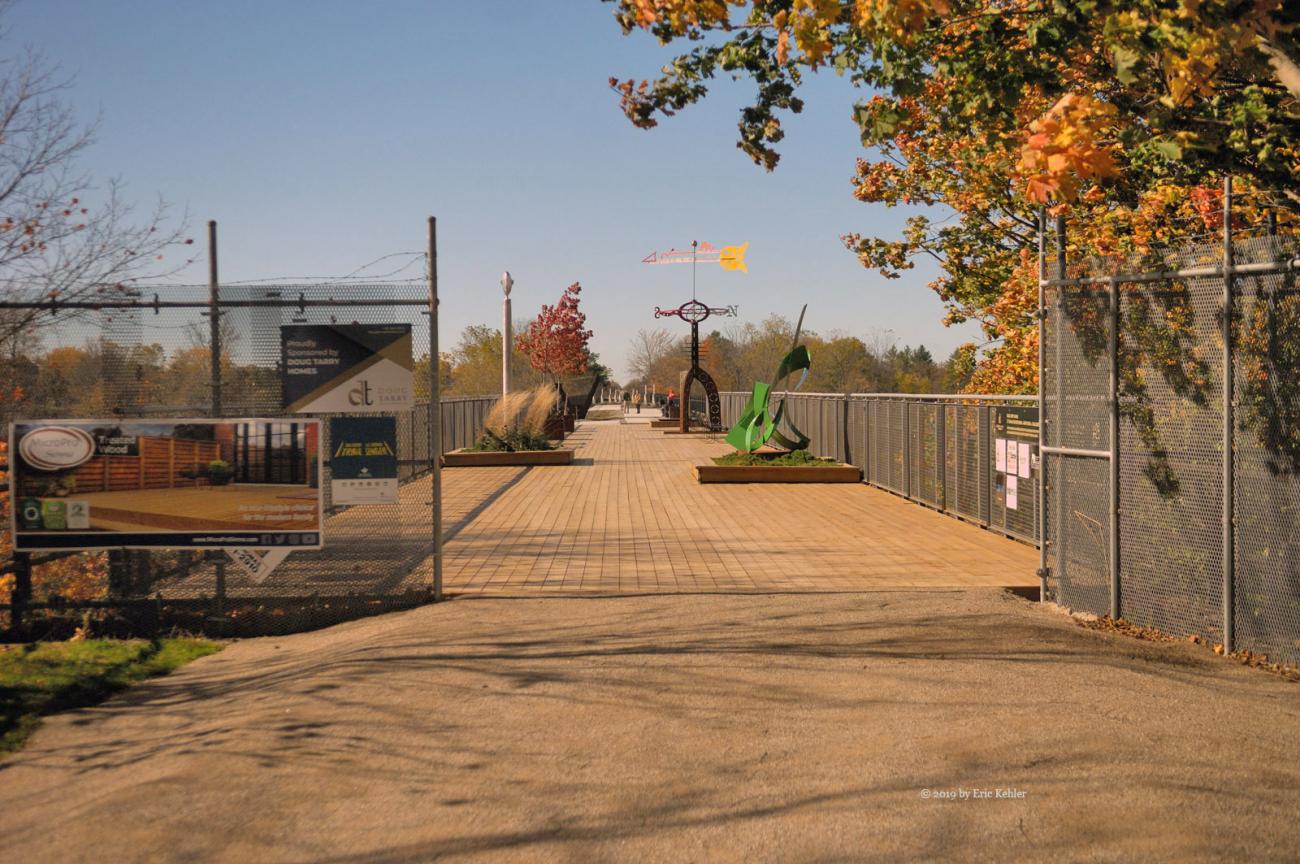 It being Wednesday, it was the day when my wife Carolyn likes to go to the local kitting shop for the weekly knit in. She has been attending the many years we have come to Port Stanley and she was looking forward to her annual visit. It starts at 1pm so we organized our day to fit around the meeting. At 12:30 we got organized and we set out for St. Thomas. It was a lovely day though windy and we made fast time along the road through the clear skies. I left her at the shop and decided to visit the elevated park, which is in walking distance, to see if it was further developed.

Last year the park was quite new, and one could only walk half way along the trestle bridge. This year the entire span was open for walking though it is still not complete, one can cross the chasm below, the bridge is now part of the trans-Canada trail system. I walked across the span gathering a few colour shots of the Kettle River below. Being more complete it is now attracting greater numbers and there were over a dozen people wandering the trail or sitting on various benches enjoying the view and fresh air. It is a nice addition to the area.

Done with the park I decided to head north towards London and follow the Thames River for some distance to the west. I had travelled some of this route a few years back and was interested in finding a few angles of the river. So, I made good time along the main roads and finally came upon some back roads along the river. Most of the roads travelled alongside the river where there was a wide area of bush which blocked views of the water below. I made my way to the town of Delaware and turned onto Muncey Road which seemed to head back to the river.  Along this this road I found a few short road spurs that led to the river and some of which offered views of the river.

Muncey road also had a new type of stop sign which I had never seen before. If not for its colour and shape I would not have known what it was. ‘Stop’ was replaced with the First Nations word, Nookshkaan,  that I guess means stop! In coming out this way, I was also hoping to find a small cemetery I had spotted before where the grave markers were collected and placed in a large cement base. As the day wore on, I was beginning the think I would not find it, and after studying the map I was even less certain I could locate it. Except that as I looked up and to my left, I was starring right at the cement structure! Go figure, glad I wasn’t watching the map too closely.

I parked and wandered the memorial field; the river was not far below but again it was blocked by a field of trees and electric fence. I continued to road 8 and stopped at its bridge over the river. Here I found a number of interesting sights along the short segment of the river. On the one side I was able to get down below the bridge but the view was not as good as above. So, after getting my fill of photos I started heading back to the shop to gather up Carolyn. I took a leisurely return and found another creek valley with some colours and cows to capture. It was a tranquil spot with lots of interest. I could have stayed much longer but time was running out so I quickly snapped a few photos and continued on the road. Soon I was on the final road headed to the shop where Carolyn was now waiting. A pleasant day with not an overly large number of photos but it was a relaxing adventure which really is the whole point.