The ground around the lake is very soggy, it makes for challenging driving and hiking. 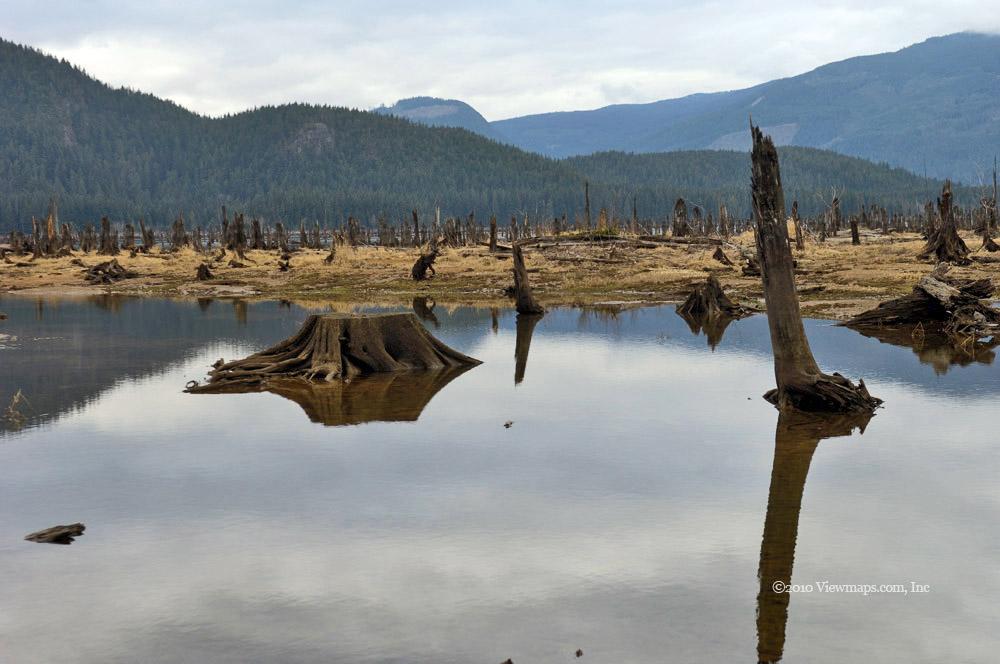 It was back to Stave Lake even though it had only been a month since my last visit. We covered so very little ground last time that I thought another trip was in order. For today's trip we would concentrate on the lower section, to reach it we took the first branch past Davis Lake Park. surprisingly, by the end of the day we had covered even less area than on our previous trip! Weather wise it was a decent enough day but the rains had definitely left the lower sections of the road very muddy.

Our first excursion on to the flats saw us mostly in the truck, we chose a road that looked like it would take us to the lake. As we made our way down to the flat section near the lake, we soon came to a giant mud puddle blocking the road. The last time we were here was a few years back when we were in the Pathfinder, this puddle turned us back at that time as we didn't have a winch and really didn't feel like getting stuck in the middle of deep mud. Today we zipped through the puddle, by hugging the right edge we got across through with no issues. We then followed the road, which was really more of an ATV path, through more muddy sections and between some narrow gaps between stumps. Soon we determined that the road ended well before the lake and the short remaining section of road was even muddier than what we already travelled, so we opted to turn back.

Unfortunately the return trip proved more of a challenge than the one heading out. With the slick mud and numerous fallen trees that crossed the road we soon found ourselves unable to get enough traction to ride up a log. So we dragged out the winch cable and pulled ourselves over the log. Very soon we had to repeat the chore and then we came to a steep incline that was too muddy for traction and we had to use the winch a third time within the half kilometer! The winch made short work of the situation each time so it was definitely a needed tool for today. We arrived back at the large mud puddle and this time we didn't hug the side as closely and as we made our way across our rear right dropped into a deep hole, fortunately we had enough momentum to keep moving! and we didn't need to get out and get wet.

After that we returned to the higher section of road which led south between Davis and Stave lakes. It was easy driving here and soon we saw that we were within a quarter kilometer of the edge of Stave lake so we decided to park and take a hike out to the lake. The first section of the hike was through low growth and brambles and then a narrow strip trees, we quickly got to the place marked as the edge of the lake by the GPS. Funny but there was no lake, it seems that the low water level had exposed this area and it was now mostly grassy patches with criss-crossing troughs of water throughout. There was only around 150 feet of ground to cover before a slightly higher forested section could be reached so we thought we would give it a try and see if the lake was on the other side of the higher ground. We had to make a small bridge out of fallen logs at one point but after a short while we had worked our way across and were now in the forested section. It didn't take long to cross this small patch of trees but there was still no lake at its far edge.

We did find soft sandy ground leading far out to the true edge of the lake. Now we could actually see the lake and all the thousands of tree stumps left behind as the lake filled. We slowly picked our way across the sand trying to avoid the softer sections that sank who knows how deep. Soon we came to a small finger of water where we stopped to gather photos. We decided to not head out further as the scenery here was quite amazing with all the stumps. After resting a bit and taking a variety of shots we started back to the truck. We made much better time on the return, I guess we knew what to expect and what we were doing. As we neared the final treed section a number of loud gun shots went off to the south of us. The shooters were doing some target practice but it was far enough away to not be an issue, but we did head to the truck as quickly and directly as we could.

Once back we gathered our breath and decided to head to McDonald Falls. This trip I had my tripod and I could get some slow shutter speed shots of the water. After a few images of the falls from a number of locations we returned to the truck and set off home. The weather had worsened by this time and we were actually getting a few drops while shooting the falls. So it was a good time to be done and set off home. It was a fun trip but we covered very little of the area so I do feel a third visit is in order in the near future.