A Stroll through Lighthouse Park

Nick had the day off and so we decided to return to Lighthouse Park to hike the trails and enjoy the salt air as we sat on the rocks over-looking the bay. It was a lovely afternoon in the sun. 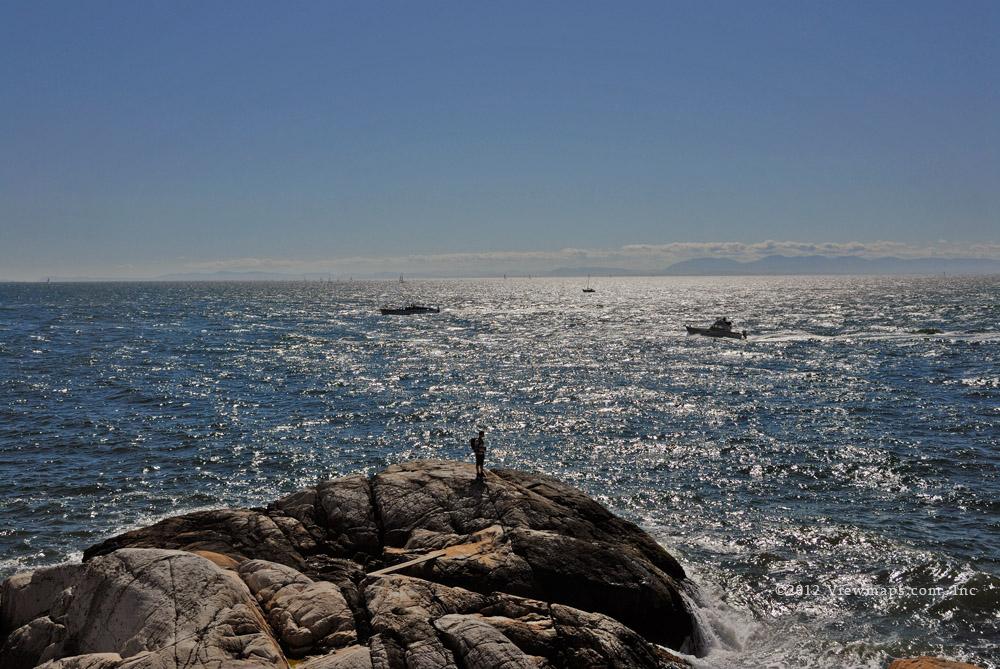 Nick doesn’t get to enjoy the backcountry as much as he would like due to his working on the week-ends. So when a long week-end comes along we try to take advantage of it and get out somewhere to enjoy the sights. Today we returned to Lighthouse Park. I hadn’t been there since our last visit together back in April, 2011! so it was well worth the effort to return. Today we decided to start our hike on the eastern trails and work our way around to the western views. So we set off and after the customary stop at Starbucks and later a Safeway for lunch supplies we made our way to the parking lot of the park. When we arrived it was quite full but there were a number of spots readily available for us. We chose one across from where the western trails connect to the parking lot.

Once parked and settled into the site we got our hiking gear loaded and we set off for the Arbutus Trail that runs along the eastern portion of the park. Before actually starting on the Arbutus trail we took a detour to the summit. Now this summit doesn’t compare to that of any minor mountain but it is the high point in the park and has some views of the water but most of the view is blocked by the beautiful and huge trees surrounding the rocky summit. Once we had our fill of the rarefied heights we slumbered down the Summit Trail to where it joins up with the Arbutus and there we continued our way down to the shoreline.

In time we reached a small spur trail that led out to a rocky exposure on the eastern side of the park. We were the only ones on the rocks and we took a few minutes to enjoy the freshness of the sea air and warm sunshine in the mild breeze. It was a delicious spot with all the elements readily available to enjoy and no one to bother us. I gathered a few photos but we wanted to see more and so we returned to the trail and made for Eagle Point. When we arrived at the point there were only two other couples enjoying the scenery and we were able to find a nice spot to relax and eat our lunch. Done with the prepared sandwich, I started to roam the rocks looking for some interesting photos to gather. By now several other groups had found the point and were busy taking in the views. After a few photos, I checked with Nick and he had collected the photos that he wanted and so we grudgingly left the rocks and continued along the Arbutus Trail and then the Valley Trail all the way to the main facilities.

Continuing passed the buildings and the growing swarms of people we walked directly to the East Beach. The tide was out and we were able to crawl across the rocks to some that were normally out of reach. This opened some new angles for me and I was able to gather some photos from the new perspective. By now the crowds of people were getting large. I was quite surprised to see the numbers out here. After some time on the furthest rocks we returned to the beach, I set off for the main path back but Nick wanted to try scaling the rock face for an alternate return trail. He managed to get off the rocks but the undergrowth was thick with brambles and he decided it would be best to back track and follow the normal route back. This did wear him out a bit and so we took a bit slower of a walk as we made our way to the west beach.

The west beach had a few groups on it but it is much less travelled than the eastern one and so we had much of the rocks to ourselves. We picked a spot close to the western edge and there I enjoyed the sights, sounds and smells of the waves crashing over the rocks. The scene of the lighthouse is truly classic from the location and I could spend hours here enjoying it. It is a great spot for winter sunsets as well. But it was getting on in the day and so after getting well rested we reluctantly got up and started back up the trail. We had spent several hours enjoying the sights and we were getting a little tired so we decided to forego the rest of the western shoreline and take the Seven Sisters Trail back to the car. It was a pleasant walk through the trees and all too soon we arrived at the car. The crowds it seemed were increasing and cars were backed up looking for places to park. It sure is a popular park yet the eastern zone still virtually empty. We had a good time and the drive home went quite quickly. I look forward to my next visit.