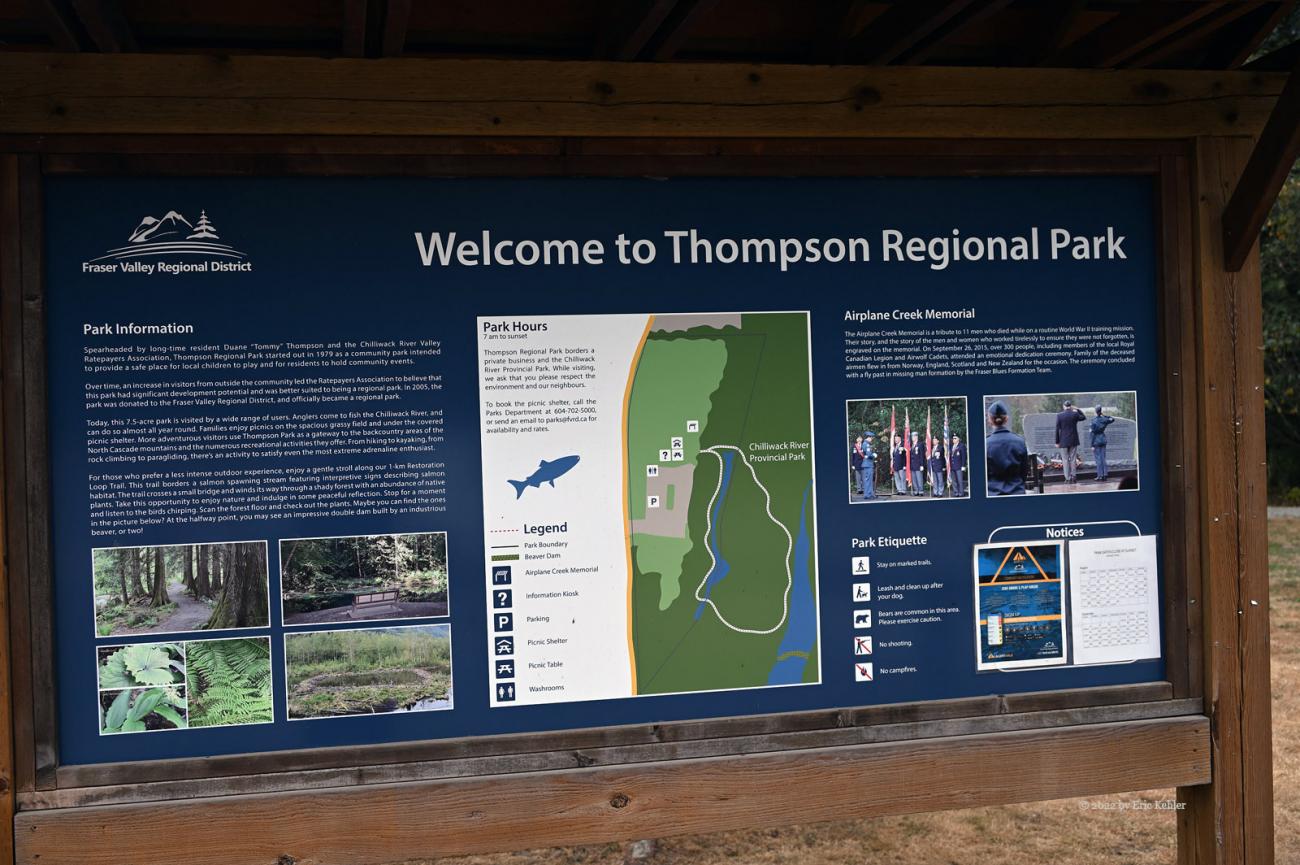 For some time, I have been eyeing the parks along the Chilliwack River. There are a few of them and I have been interested in getting out there. Thompson Park is not too far up the river and from the map images it was an open area with facilities – ideal for a radio activation. Which may be why several have been there already. It looked like this week would be ideal for heading up there, not too hot, dry but there would be some smoke in the air due to the fires burning up the valley. I invited my son Nick to come along which he did, so the two of us planned to head out after an early lunch.

The Navcom sent us on some different routes from how I have historically traveled to the area. It sent me through Yarrow where I bypassed the downtown business of Sardis. I am not sure it was any faster but it did offer some new sights to see. We deviated from the route near Abbottsford so we could get some coffee but otherwise the drive went fast and soon we were driving along the river looking for the entrance.

The parking area is quite large for such a small park, but I suspect it is used by people wandering down to the Chilliwack River, which runs alongside the park, for fishing as a few trucks were parked but the owners were not in the park. Shortly after we arrived and while I was scouting the area some mothers came by with young children. They were having a meet-up where the kids could play together on the playground and then eat under the shelter. When I started to set up, they came by to ask about my activity and were quite impressed that I have worked Spain and across the continent from other parks.

Once I had selected a table and strung up the antenna, I turned on the radio and scanned for some activators. I noticed that the band was quite busy with activity filling most spots. I had some strong background RF noise that was periodic in nature, fortunately the noise blanking software in the radio was able to clear it up.  I was able to work a couple of other activators at parks and soon had four contacts in the log. I heard a chap from Spain calling DX but the pile-up was too big for me to be heard. I kept scanning the band for a free frequency but was not finding a suitable one and after hearing from Ralph the day before that the bands were good including 15m, I decided to try 15m myself.

There were two other activators on 15m on the list I couldn’t work them so I was a bit concerned about trying 15m but I selected a frequency just below the lower of the two activations and started calling. Very soon I had a strong response from a station in Iowa and then Wisconsin. So 15m was working well. Next came in Illinois followed by a Canadian in Halifax! A few more mid-western contacts came through and then things quieted down. I decided to switch back to 20m and settled into a frequency lower in the band.

From my 20m frequency I started pulling in a number of stations from Wyoming and Ontario through to Pennsylvania, Texas and California – a wide swath od country. Band conditions were much better this week than I have been seeing lately. After an hour of activity, I managed 20 contacts. The most I have made in months! It was a pleasant change from some of the other recent activations. I could have stayed longer but I needed to pack up so I could get to the meat store before it closed. Nick helped stow the gear and we were soon on the road. The navcom sent us to the store along the same route we came on. Traffic was light until we reached Mt. Lehman Road where the store is. The area is under construction and traffic is crawling in all directions. We managed to sneak our way through the cars and semis and soon were selecting our pick of the meats we wanted. Heading back into the congestion was not too slow as a truck was gracious to let us in and then we were able to quickly get into the left turn lane and exit the area. The remainder of the drive went with out any excitement.