Our first summit of the season. A beautiful area with alpine lakes but a very muddy trail and excessive sun made for a challenging hike
Category
Serendipitous Discoveries
2014 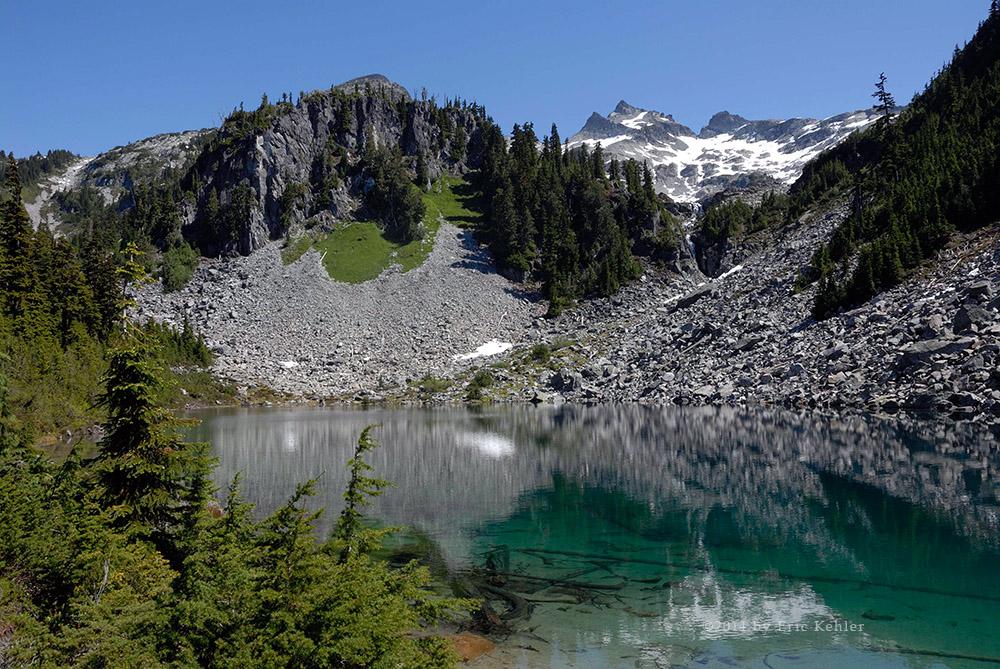 E
arlier this year I came across a story and video about some hikers watching a Sasquatch making its way across a snow field. They were on Tricouni Peak looking down into the slopes below. This caught my attention and I thought it may make for a good hike. There were a number of published hiking reports and the trail to the lakes is very popular in summer. So it became the goal for our first hike this season. Back in May we drove out here scouting the roads for the right choice of turns to reach the trailhead. We did quite well back then getting to within a few hundred meters of the trail-head before we were stopped by snow. That made today’s drive go quickly and we got to the trail with no distractions even with almost bald tires.

The one concern we had in starting out today was the forecasted high temperatures. A lovely sunny day but it was going to be a hot one and I don’t hike well in the heat. Well having arrived, we got our gear together and started for the trail. There were already two other vehicles along the road and so we knew we would be encountering others along the way. The first section of trail was cooled by trees and the ground was quite solid, I was hopeful the mud would be not as bad as described. But then we came to the first patch. It was slippery and not easy to get around. The edges were generally more solid and that is where I tried to walk.

We continued along the trail walking over solid ground alternating with thick deep mud patches. Early on Geoff took one step and sank in over a foot deep in the goo. He was more careful after that experience. Fortunately his gaiters kept the mud from flowing into the top of his boots. My boots weren’t as waterproof as Geoff’s so I had to be much more careful. Well we kept walking and the patches of mud kept coming some were thick mud others quite loose. At least the trail was easy to follow through the valley leading to the first lake. After an hour forty we came by the first of the alpine lakes. Here the area opened up and the ground was solid.

Our first views of the alpine lakes were quite amazing, it truly is a lovely sight and I can understand why so many come just to visit the lakes. But our goal was to reach the summit towering over us. So after gathering a few photos and just enjoying the scene, we continued along the trail leading up the slope to the next lake. It roughly followed the creek which it made its way between two lakes. It was very beautiful in its own right. After gaining some elevation we mounted a ridge and there we spotted the second lake along our route. At its shore was a small campsite with a few tents setup. The occupants were not around. I guess they were out gaining the summit.

Now the trail followed along the edge of this lake but it first crossed over the outflowing creek. This was our second challenge of the day. The water was flowing fast and the creek was much deeper than our boots high so we had to figure out how to cross it and stay dry. Geoff found a few rocks that were a couple inches below the surface that he used to cross but my boots would not stay dry if I used that spot. So I walked down stream a few yards and found another series of rocks and logs that were not so submerged. Here I started across. Geoff lent a hand to pull me up when I got near the far side. It worked and my feet remained dry enough.  We continued around the second lake and started up the slope at the far side which was where the stream flowed coming from the next higher lake. This area was heavily strewn with talus and the stream was flowing fast between the rocks. It made for a challenging climb up the slope and it was getting hotter out; I was starting to feel the heat and be slowed down. We made our way up a steep section of the trail and crested another ridge which brought us to the top of a lovely waterfall which we were enjoying from the distance. Now we had an easy walk to the close side of the upper lake.  Here we took a bit of time to rest before starting the slog to the peak.

By now we had been passed by a couple of other pairs of hikers and I could tell that frustrated Geoff who was being held back by my slow progress. We started around the lake following a well-worn trail. We made our way up the far slope but here the trail was not easily found and we climbed up faster than needed and ended up in steeper terrain then we should have been in. But by now it was near the hottest part of the day and I just couldn’t keep it going. We had another 400meters of elevation and perhaps 1100m of trail. Geoff was also having pain in his shins and so he felt it best to not push it as well. So we reluctantly started back down to the upper lake and once there we pulled out our portable chairs and ate our lunch. I had brought my new water filtration kit and siphoned off some of the cool lake water. It felt quite refreshing on a hot day. I was also able to reload our two water packs for the return trip.

After enjoying the spot for some time and taking with other pairs as they came and went, we packed up and started down the trail. It went much faster on the way down as we now knew where we had to go and I didn’t need as many rest breaks on the way down. The talus was still very challenging but soon I was staring at the fast flowing water crossing once again. Geoff zipped across with little thought but I had to find a spot I could cross without getting wet feet. I found the spot and Geoff waited on the other side with an arm for help. It was a good thing he had a good grip because my feet slipped on the wet rock as I reached the far side.

Done with the hard stuff we had only the mud to deal with once we got down to the lower lake. The trail through the mud seemed to take forever on the way back. Though downhill it was much hotter and I was getting quite worn out. I did get through the mud pools thanks to my two walking poles, without them I would have fallen in the mud more times than I could count. But they kept me quite mud free. Well we finally reached the truck and here we were too tired to move fast so it took longer than expected to pack up and get moving.

I called John on my ham radio to let him know we were on the road as he had promised us some cold lemonade when we reached his place. He had been monitoring the band for us during the hike lest we need some help. It is the power of ham radio out here as we had radio contact the whole time we were hiking, a great safety tool. Done with the hike the drive down the B200 to the mainline seemed to take forever, we were just too tied for patience. Just before we left the side road Geoff pulled into a short spur where others had done some target practice as he wanted to try out his new rifle. It is a semi-automatic .22 with large capacity magazines. It worked quite well for him and he was pleased with his new rifle. Well we were done with the back-country and we made for John’s place just past the start of the FSR. We enjoyed a large quantity of cold lemonade and then set out for home. A good day – tiring –and we didn’t reach the summit, but it is an awesome place and we had a good time. 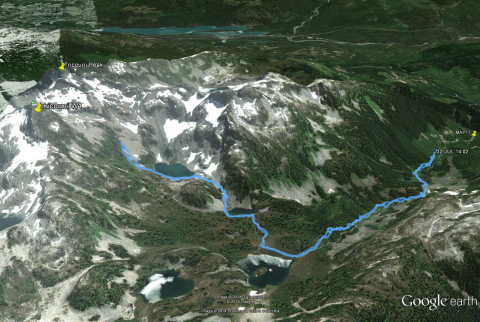