It seems that in life one stays to the close and familiar. It takes real determination to step out of the familiar into the new. At least it has been with me over the years. If I went to a park, it was the same ones, seldom would I try a new one. Doing Parks on the Air encourages getting out and activating as many different parks as one can. So, it was only a matter of time before I finally went to visit Tynehead.

Tynehead park is a lovely walking park with many long trails and many open areas to enjoy the fresh air and sun. Unfortunately, it is at the north end of Surrey and I live in the South so this was just one where  it didn’t seem to be worth the effort to go to. I had always meant to visit but that day never came until today. Ralph wanted to do this park and I had no objection so as Friday was a lovely day to be outside, we packed the gear into his car and set out for the park. An easy drive straight down 168th. We left my place around 1pm and arrived at the park around 1:30.

Once parked we scouted the area, Ralph found an empty park bench and set up his gear at it. I chose an open spot nearer the car park where I could use a tree for one end of the OCF dipole. My mast in the centre and then Ralph’s fence post at the far end. It worked well once the radio was attached, I tuned in 15m and soon had my first station in the log, it was a fellow BCer near SFU! Not much DX but my next contact was in Arkansas followed by Alabama. So, I was getting out but it was slow going on 15m. After almost 20 minutes I switched to the 20m band.

20m proved an initial challenge as it was quite busy and finding a open spot took a few attempts. My first got crowded by stations on both sides. I moved down band and eventually found a spot that seemed quiet. I spotted myself and after a few minutes – longer than normal – I started making a regular stream of contacts. Over the next 25 minutes I logged 14 contacts. These ranged from Alaska to Pennsylvania. Working not that far from Ralph did cause some interference. I noticed that the noise floor would jump from S1 to S3 when he started transmitting. Some stations became hard to hear when he was sending, but I managed to get enough logged to activate the park.

Well, we both had completed enough contacts and so we packed up the gear and set off for home. Traffic was a bit heavier than on the way out but still seemed quite light for a Friday around 3pm.  Well I finally visited the park, though I only saw a very small portion of it, I at least was there. I really do need to go back and explore other parts of it. My son whom I had had a coffee with in the morning said how he and his wife would jog the 5km trail in the park. They spent a lot of time in it over the years until Covid closed it. Now it was open again and I suspect he will return. For me, I guess I will still concentrate on the closer ones. Sigh 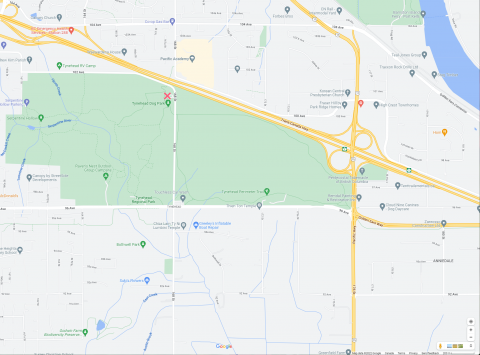