A busy area in the warm sun, yet lots of room for more
Category
Parks on the Air
2022 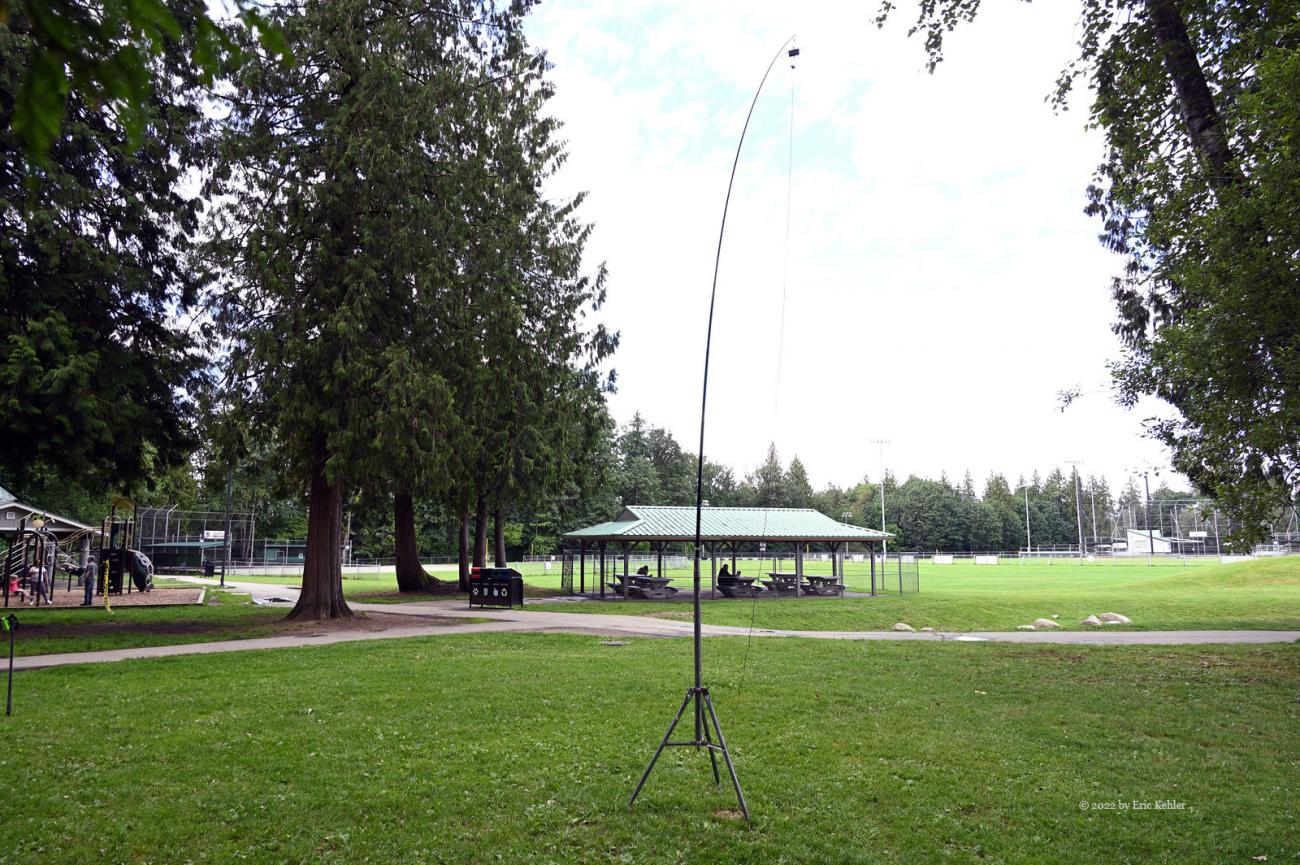 It had been a while since my last activation, considering that my previous park outing resulted in zero contacts. So, I wanted to redeem myself, but I set out with a bit of trepidation as to how I would fare. The day was pleasant and ideal weather-wise for activating a park, though one may need to find shade. I was getting away a bit late so the park needed to be fairly close-by. As such I settled for one in North Langley. It would provide a pleasant drive and show me a few new parts of my community along the way.

I made decent time to the park; the car computer seems to pick good routes. Upon arrival I had to decide where to park in the extensive parking area. From my pre-trip analysis with the satellite view I saw decent spots at the far end of the parking lot. So, I drove through the lot to the end. There were a number of people with children about but the lot was mostly empty. I parked and then got out to explore the area. Right next to the parking area was a large water park for kids, it had a number of younger kids enjoying the cool water in the sun.  I walked the length of the parking lot reviewing options but, in the end, I settled on the park table at the far end, near where I parked.

There were a few benches all unoccupied, they were shaded from the sun with a nice open grass area next to them. Ideal for an antenna except that there was a line of trees to the South and East of the tables! The number of trees wasn’t large so I felt they would not impede my signal too much. I went about setting up the antenna and then tuned in the band.  I could hear a station in Rhode Island, so I figured the trees weren’t going to be a problem. There were a number of loud stations on the band so I was encouraged.

I dialed in another park activator and tried listening for him but heard nothing. I tried a few more parks and eventually worked a park activator but most of them I couldn’t hear. Next, I settled into a lower frequency in the band and started calling. My second contact was with an Alaskan station followed a while later by one in Indiana. So, I was getting out but it was rough going. A good thing for the message play and repeat option otherwise my voice would be gone. Over the next hour I slowly made contacts reaching the required 10 in an hour of calling. Not a good rate but I got it done.

As time had slipped by, I decided to end the calling but first I did a quick pass over the listed activations to see if I could hear any of the other park activators. I found one in Colorado that I was eventually able to work and so I ended with eleven logged contacts. Not a great number but at least it was enough. I packed up the gear and then wandered around a bit more and gathered a few more photos of the park. During my time operating a number of people wandered by on the nearby footpath. Only one person stopped to ask about my activity and was quite interested in where one could communicate to. I guess for most people used to talking on their phones to people across the states, this just doesn’t seem like much of a challenge any more. But just this morning as I write up my story the news reported on a major outage by Rogers affecting phones and internet. The cell system really is very fragile compared to ham radio.

Done with radio and walking the park I returned to the car and set off for home. I was routed back the way I came so it was easy to find the way. Traffic was still fairly light and moving well in the busy areas so I made decent time home though it was five minutes slower than going and I even arrived at the time the car originally predicted! Now to plan for my summit hike on Saturday.