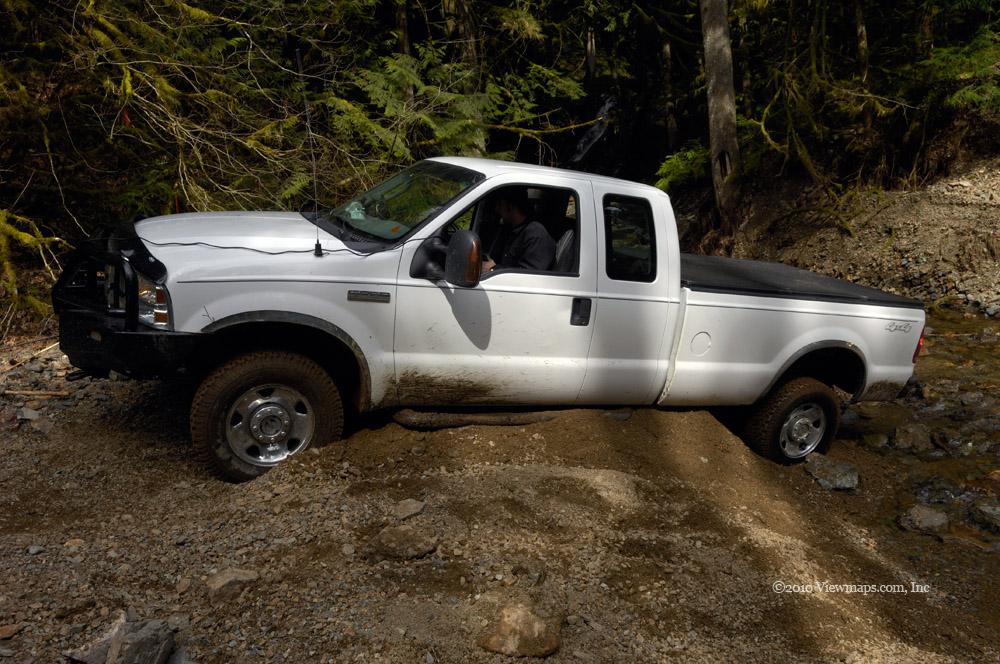 Today was supposed to be the day Geoff and I were to hike to McKay Lake which is on the slopes of Mt. St. Benedict. But I ran into a snag, yesterday while cutting the lawn a rock flipped up and broke the back side window on the truck, I didn't notice it until after the repair shops were closed! So today we had a plastic sheet over the window but it wasn't secure and we felt it unwise to park the truck unattended in the back-country in that state. So we chose to delay the hike and return to the West Harrison area and check out the first side branches we came to.

We arrived at the start of the West Harrison around 11:30 and quickly noticed that the early section of the road was under construction. It would seem that the first few kilometers of the road were being leveled off and straightened out to improve traffic flow. I guess there are enough recreational users in this area now that they cause problems for the logging trucks. Once past this work zone and the currently extra rough road, we soon came upon the back entrance to the Weaver FSR. Back in May 2003 I had driven the first 2km of this road but stopped short of exploring it in detail, so today looked like a good opportunity to resume our exploration.
Today's trip continued past the last trip by taking the left fork and then repeating that until we were stopped by a large log that was blocking our way. The road beyond looked inviting so we decided to give the log a new home. We attached the winch cable to it and pulled it to the side of the road and soon we were making our way past. The road split again several times as we made our way up to a rise overlooking Harrison Lake. We had lovely views of the lake and back along the Harrison River to where we crossed over it on our way here. The road was mostly clear but there was a thin layer of snow in places which helped to keep the air cool. After driving though the various short spurs through this area we stopped at a viewpoint and took a few moments to eat our lunch.

We returned to just before where we moved the log and tried another branch that led to a second hill-top unfortunately we were stopped by a large tree that was leaning across the road. If we had the chain saw we could have cleared it but doing so by hand was not attractive so we returned to the previous fork of Weaver FSR and continued along to Francis Lake. It is a smallish lake but still large enough to have several campsites around it and today there were a few groups out fishing. Though the road was not too difficult to drive, it was still hard enough to keep the less seasoned 4x4ers away. The lake sites are maintained by volunteers and they seem to be doing a good job of it.

Once we had enjoyed the lake for a few minutes we continued to the end of the road segment and then returned to the main path that continued on to the heavily used access road to Weaver Lake. It was very wet and soon extremely steep and narrow. We decided to not try it in the truck and so we back tracked to the original fork and set off along the right hand branch. Soon we were making our way through some swampy regions and past another 4x4er who was stopped on the side of the road - later we learned that he had stopped and was deciding if he should continue but since we had gone on he thought he would try it. Not much later we came to a stream crossing with steep sandy banks. We dropped down into it but were stuck getting up . The loose sand like gravel just spun out and dropped us onto our under carriage. We had to pull ourselves up the bank with winch. The other truck then tried it and though he got stuck at first eventually he got up the bank. We then continued forward but it wasn't long until we were stopped by a washout - only an ATV could go on. So we returned and as we crossed that gravelly stream we got stuck climbing the far side. So we winched our self across it a second time. It was actually a fun little stream with a lovely small waterfall just up from the road.

We then returned to the main road and continued further in to 10 mile bay where we dropped down to the lake and I got a few shots of the views from there. A large group had set up tents a bit further around the bay and a number of the campers were out exploring the shoreline. As it was now approaching 4pm we decided to head back home.

Soon we were back to the pavement and making our way through Harrison Mills and as we started the climb up Mt Woodside we saw a new sub-division off to the south, over-looking the Fraser Valley. Since the gates were now open we decided to see what the views would be like and we drove along the lower of two roads as it seemed to head out towards a viewpoint. After passing a few newly constructed homes we reached the end of the road and saw a gravel path leading up to a small building constructed to provide a lovely view of the Fraser. We decided to park and head up to the small structure and enjoy the sights. It was a lovely spot and would be a great place to enjoy a winter sunset.

After a few minutes taking photos we returned to the truck and drove through the rest of the sub-division. That first spot was definitely the best developed so far, but I could see that they were eventually going to open some higher stuff with even better views of the valley. It was now almost 5pm and so we returned to the highway and made a quick return drive home. Though not the hike we planned and the missing window made for a much noisier drive, we did enjoy the day and found some lovely new spots for photos.