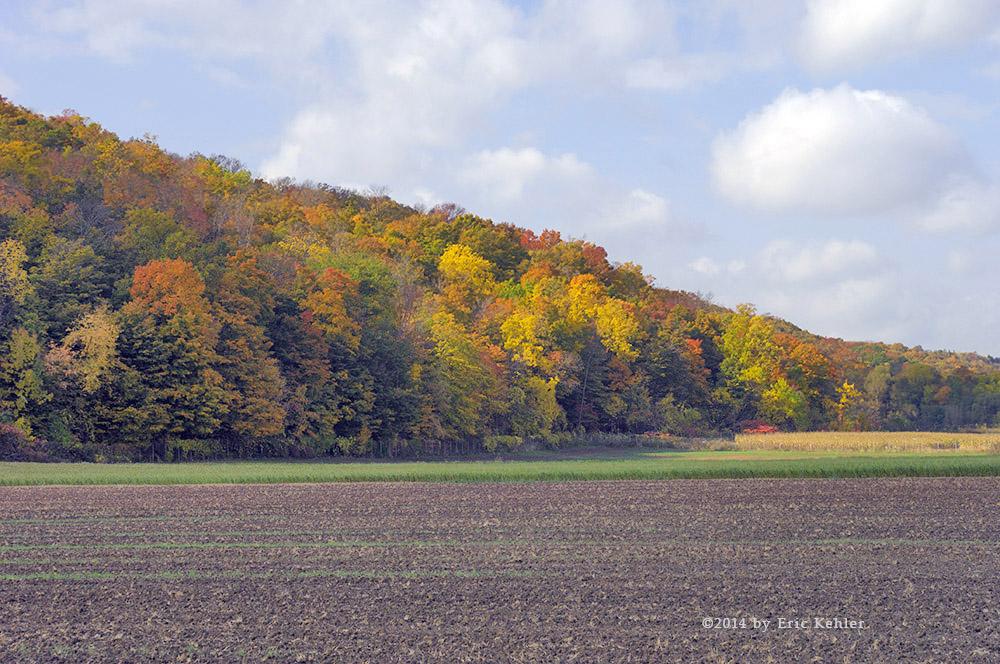 Today was promised to be sunnier than yesterday and so we set out with the hope of finding some brilliant colours along the Escarpment. Unfortunately, someone forgot to tell the clouds. So when we first set out we drove along the Escarpment to the west and looking for some good vantage points of the slope. We found a few but the sun was still in hiding. We eventually had a few short periods of sun and were able to gather some nice photos of a few spots. But the sun was soon covered so we decided to head back up the ridge and into the back roads.

Mike wanted to return to a small pond we had shot at back in 2010 so I looked up the GPS coordinates from an old photo and we drove south to find the road side pond. It didn’t take us very long to reach the spot though we almost stumbled past it before realizing we were there. Checking the co-ordinates, they matched our records, and sure enough the pond was here – sort of. During intervening four years the grasses and marsh plants had swallowed up most of the open water and we weren’t able to find the interesting objects that so enamoured us last time. The clouds had also thickened given a dull look to everything. And we even were splattered with a bit of rain. Mike and I did gather a few close-up photos but not the numbers we were hoping for.

After a short while at the pond we decided to head back to Binbrook for some fuel and lunch. As we drove through the centre of the town we spotted a small café – The Countryside Grill – it was in a new mall that was still mostly unoccupied. The whole town was undergoing a rapid growth period with many new subdivisions being built. The food was quite good though the hamburger Mike ordered was so big he couldn’t eat all of it. We were in no hurry to leave as the day continued dull, but as the day passed we eventually felt it time to move on. We left just after 2pm and made for a gas station. Once fueled up we started looking for a good spot to do my radio call to Ralph in Vancouver. We picked a spot on a small rise and set up the antenna and radio. I checked the access to the repeater in Mississauga and found it solid. So I dialed in the UBC repeater and put out a call for Ralph. He immediately responded and we had a nice chat for 10 minutes. After which he went back to work and us to play.

It was approaching 3pm and as the day was still so dull we decided to pack it up for the day and try again tomorrow. So Mike dropped me off at my B&B and I settled in for a rest. Though not as pleasant a day as we wanted we still saw some nice locations and had a relaxing time enjoying some nature.